Chrono Cross: The Radical Dreamers Edition would be a timeless JRPG, if it weren’t for its shonky performance 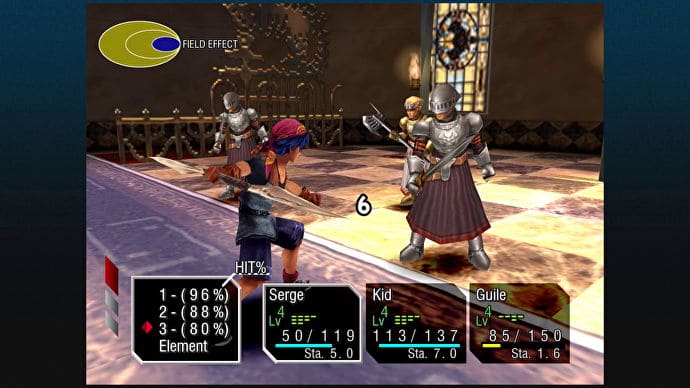 Chrono Cross was one of those Square Enix JRPGs that never made its way to Europe at its original time of release. Heck, the first time I got to play time-travel classic Chrono Trigger was when the Nintendo DS version came out in 2009, almost 15 years after it first came out on the SNES. Chrono Cross, its semi-related but not direct sequel, has taken even longer to get here. First releasing on the original PlayStation in 1999 in Japan (and 2000 in the US), it’s finally arriving on PC and modern consoles on March 7th as Chrono Cross: The Radical Dreamers Edition, which bundles the original game with its accompanying text-based side story Radical Dreamers that only ever released on the ill-fated Satellaview. The latter’s original 4:3 pixel art looks mildly ropey blown up on today’s screens, but the main game has received all the modern conveniences you’ve come to expect from Square Enix’s recent run of retro PC ports: new HD character models, re- orchestrated music, multiple font options, and the holy grail: a fast-forward button.

I’m nowhere near the end yet, but from what I’ve played so far, Chrono Cross is a rolling good time. There are dozens of characters to meet and recruit to your party that can tangibly change your path through the story, the turn-based battle system offers oodles of depth and variety, and Yasunori Mitsuda’s revamped score is right up there with the Final Fantasy greats. For all its buff and polish, though, Chrono Cross has, sadly, also been struck by the same curse as other Square Enix PC ports. The lack of settings options makes it hard to pin down exactly what the problem is, but there’s something about the performance and inconsistent frame rate of my review build that’s so fundamentally borked that it’s like those 22 years haven’t even happened. If you, too, have been looking forward to Chrono Cross: The Radical Dreamers Edition, I’d strongly advise waiting for a few patches to arrive before dipping your toes in.

My eyes aren’t nearly as keen as our friends over at Digital Foundry, but as far as I can tell, the game appears to be running at a locked 30fps – despite Nvidia Shadowplay claiming a full 60fps on my 4K monitor. That in itself, I’m absolutely okay with. I’ve got nothing about a locked 30fps frame rate, as long as it’s consistent. In battle, however, that frame rate visibly grinds to a halt in places, and the accompanying lag on my controller inputs makes me want to bite down hard on my knuckles every time I need to select an attack – an unfortunately frequent occurrence in Chrono Cross due to the nature of its stamina-based battle system.

You see, physical attacks allow you to power up your magical element attacks in Chrono Cross. The more you attack, the higher the Element level you can use on your character’s individual Element grid – indicated by the green Lv icons in the battle menu. The Elements themselves are a bit like Final Fantasy VII’s Materia – they can be plugged into any character you’ve got in your party and rearranged at will. Only here you don’t have a separate MP bar. Instead, everything is tied to your pool of stamina points, and attacking (and defending) is the only way to replenish it.

Now, it’s never particularly sexy to start talking about stats and hit rate percentages, but trust me, in motion, Chrono Cross’ battle system really sings – once you’ve figured it all out, that is. With zero tutorialising available, it’s hilariously ambiguous compared to modern JRPGs, and even now I’m still discovering some of its unique quirks. But the way its basic attacks play out – which use between one and three stamina points depending on their severity – is glorious. With each successful blow raising the hit percentage of everything else, it allows you to pull off some highly satisfying combo attacks that not only dazzle the eyes but also tickle that part of my brain that likes to see big numbers go up. It’s just.. .that frame rate is all over the place, veering wildly between night on unplayable and second-long glimmers of a full 60fps.

The mad thing is, this frame rate lurching doesn’t happen anywhere else. Navigating your party around towns and its top-down world map is delightful. No problems at all – apart from the epic amounts of screen tearing I encountered due to a lack of any V-Sync options. Instead, the only real gripe here is whether you’re able to stomach Square Enix’s still somewhat patchy upscaling tech. Like Final Fantasy VIII Remastered, Chrono Cross: The Radical Dreamers Edition gives you the option to switch between ‘Classic’ and ‘New’ graphical styles from its launcher menu. The former is what you’d expect: the old, pre-rendered pixel art with its original 3D character models. ‘New’, on the other hand, upscales those pre-rendered pixels to fit modern resolutions.

See also  Summer Game Fest 2022 is on June 9th: Make sure to circle the date in red

The game still plays out in a 4:3 aspect ratio regardless of which graphical style you go for (the zoomed and stretched full screen options are not recommended), but next to the new, pin-sharp 3D characters onscreen, ‘New’ retains that “I’ve been smeared with a big ol’ tub o’ Vaseline” look. It’s serviceable – and altogether less offensive it was in FFVIII Remastered – but there are still moments of particularly fine pixel work that break the illusion. Trees branches break down to floating square blocks, gate rails splinter into a dozen interconnected shapes, and so on.

Over time, I’ve grown to like it and lump it. I’ve actually spent more time playing in ‘New’ than I have in ‘Classic’ so far, if only because battles look significantly better with the new graphics, and dialogue doesn’t have that faux ye olde pixel fuzz round the edges of its letters. But part of me is still a bit disappointed, you know? One day we’ll get there with the upscaling, but Chrono Cross: The Radical Dreamers Edition is not it.

It’s a shame, as underneath all its technical problems is a JRPG that has instantly captivated me with its colorful setting, mad cast of characters, stunning music and intriguing parallel worlds. Despite the fact its over 20 years old, Chrono Cross feels as relevant and exciting to play now as it no doubt did back on the original PlayStation. The choices you make have an enormous amount of impact on how the story plays out – heck, even who you pick as your third main party member dictates how you approach the first big mission, with each one breaking you into an impenetrable fortress through a different one route. And those other characters you didn’t recruit? Gone. Locked off forever.

Of course, Chrono Trigger had multiple endings and lots of different choices to make that affected how characters and locations changed over time, but many of its main story beats still happened in quite a prescribed, linear order. Looking through old Chrono Cross walkthroughs on GameFAQs, however, I was surprised to learn that the game’s next big story driver – whether we go about saving a certain (quite major) character from being poisoned during that first big ission – could go either way as well. We could save them and get a clutch of other characters to join our party along the way, or leave them to fate if we didn’t actually fancy it, which would take us on a completely different journey through the game, with a bunch of different characters to encounter. Either way, the story would carry on and mold itself around that choice – something I haven’t really seen in many other games apart from The Witcher II: Assassins Of Kings. That Chrono Cross was doing this ten years before CD Projekt Red’s big RPG came along still feels pretty incredible to me, especially when so many of today’s other big story-driven games continue to soft-ball a lot of our decision outcomes.

If only Chrono Cross wasn’t marred by such honking technical woes, this would be a JRPG for the ages. I want to play more, but man alive, those frame rate issues really need sorting out first. Here’s hoping Square Enix have got a timely day one patch in store.