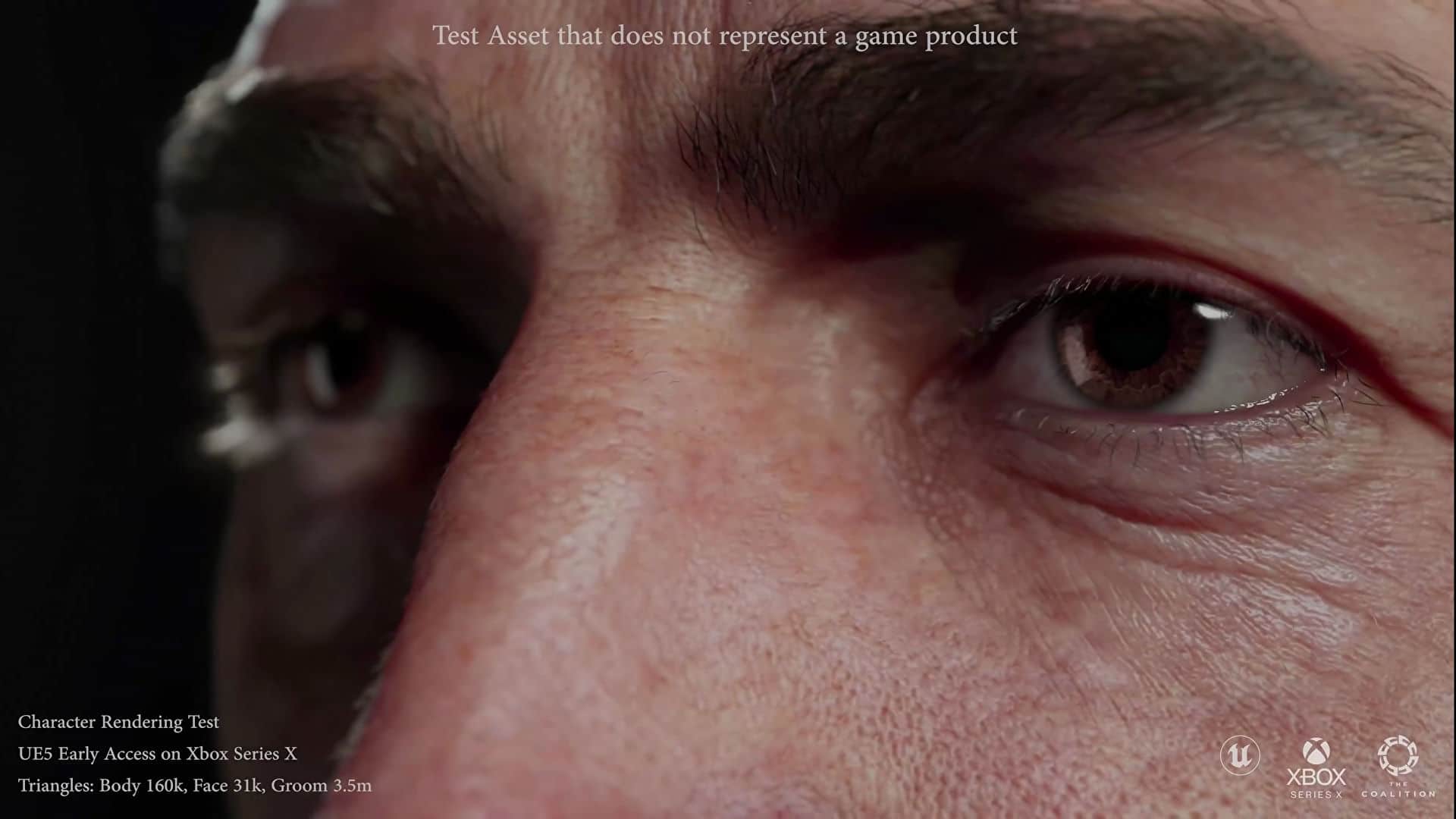 As part of yesterday’s big Unreal Engine 5 showcase, the studio behind Gears Of War 4 & 5 showed off a new tech demo built on Epic’s fancy newness. Microsoft say it demonstrates “100x more graphic detail”, which will really throw off all my reviews rating visuals on a scale of 1-5 stars. Come watch The Coalition’s vid to gaze deep into a man’s pores and coo over aggressive fog, but don’t assume the tech demo reveals any specific game they’re making.

In an Xbox blog interviewThe Coalition technical director Kate Rayner explained the studio are “not ready to talk about our next game” but they are happy to talk up tech like UE5’s Nanite geometry system (which can pump out squillions of polygons) and Lumen dynamic global illumination system.

“You can see the impact of Nanite already in our cinematic tech test, which enables full-quality movie assets to be rendered in real time,” she said. “This means that our artists can create assets with tens of millions of polygons, scalable to scenes with billions and billions. The details are just incredible, more than 100 times what was possible before. Just looking at the eyeball detail the number of vertices and Polygons are the equivalent of what an entire character would have been in the previous generation of games.

“You also see how we’re doing new things with light. Fully dynamic real-time global illumination lighting has been a long sought-after feature, but up until now, it’s not been possible on console. Lumen is a total game-changer .”

See also  Tom Clancy on the cell phone: The Division Resurgence is the name of the new mobile game

The march towards ‘photorealism’ is the most boring part of video game visuals, and adding numbers to it in marketing exercises is even more boring, but I do look forward to seeing what happens when any dev with a remotely interesting aesthetic sensibility gets going with the tech. I’ve long said that the main benefit of shiny new tech is letting devs with more ambition than experience get away with unoptimized games. I assume the main reason people are buying GeForce 3090s is to play scrappy walking simulators which attempt to render an entire full-scale alien planet at once while spraying billions of particles. Why else?

To be slightly less facetious, the tech is helpful for developers of all sorts. Rayner says that UE5 removes several friction points from their workflow. She explains, “with Nanite we no longer have to manually create low polygon versions of models, and with Lumen, not having to see ‘the lighting needs to be rebuilt’ and waiting for offline static lighting to be re-baked – greatly speeds up the development process.”

That’s good. That’s definitely good. That’s great. That can help all devs, and all games they make. Maybe some of those games will even be about people who aren’t covered head-to-toe in straps and buckles.

Along with the full launch of Unreal Engine 5, yesterday’s event also brought news on a new Tomb Raider game build in UE5. No, that one will surely have straps and buckles too.