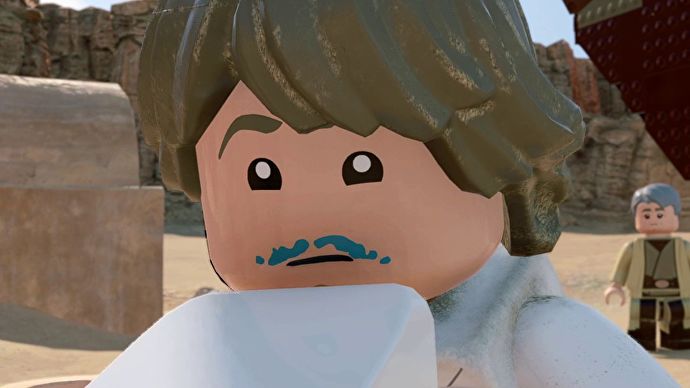 Lego Star Wars: The Skywalker Saga review
A Star Wars compilation that’s undeniably fun, but wildly inconsistent and with far too much padding from collectibles.

Lego Star Wars: The Skywalker Saga represents great value. Alles nine Star Wars films bundled up in bricks! But do its pieces really come together? Well, yes and no. The game is charming and breezy, offering plenty of locales and set pieces to fans of the force will fawn over. Yet its episodes are wildly inconsistent, with stories told at lightspeed and open world hubs filled with so many collectible bricks it solidifies your brain to a lump of mortar.

Boot up Lego Star Wars: The Skywalker Saga and it’s quite something. You can take your pick from a carousel of all nine Star Wars films to date: the originals, the prequels, the sequels. Although, it only lets you access the first from each of these ‘series’ to begin with, so that’s A New Hope, The Phantom Menace, or The Force Awakens. Once you’ve beaten one of these you move onto the next in the box set. And that’s fine, making things manageable for someone like me who gets paralyzed by choice.

You might think the Skywalker bloodline is what runs through the game’s episodes and ties them all together. Technically yes, but trust your gut, your feeling, the force and you’ll realize that it’s bricks. No, not the way the galaxy’s portrayed with a plastic sheen and built from blocks, but in the ludicrous number of collectible bricks. And characters. And ships. And mini ships. The game cares more for the collectathon than it does the story, dishing out the plot like George Lucas idly flicking through a collection of flash cards.

Quality differs tremendously depending on which episode you choose. The Phantom Menace is laughably short, racing through sections with little cohesion. Early on you escape from the Droidekas and before you know it you’re underwater in Gungan Town. Already? OK then. Start with A New Hope and things are better paced, with a nice balance of puzzling and battling that plays to Lego Star Wars’ main strength ie the Lego. You’re encouraged to flit between Leia and R2 to hack terminals or deconstruct and reconstruct things that’ll help you progress. The Force Awakens is strong too, with clever platforming sections that have you cycling through Rey’s scavenger tools, like a net gun to scale walls or a glider to traverse gaps.

The game swings between these two extremes as you hop between episodes. Sometimes it’s great fun, as you hoist Yoda on your back and tackle an obstacle course, or speed past Sebulba in a slightly jank pod-race. Sometimes, though, it reduces climactic moments to pure drudgery, as you stave off an army of Droids the MMO way: hovering a circle over rectangles and watching numbers climb. And as Alice Bee said in her Lego Star Wars: The Skywalker Saga Preview, there’s a lot of third-person shooting now. Too much, really.

Sandwiched between the wars of the stars are hub worlds that are basically commercial breaks the game plops you into. Mos Eisley, Tattooine, Hoth, Manchester – they’re all here. Some locales really do look the part, especially Mos Eisley, which brims with raiders and weird alien dudes and tusked beasts. You can’t fault The Skywalker Saga’s presentation, which Lego-fies the galaxy in a wonderful way, truly making every little thing feel like it’s constructed by a Danish toy production company.

See also  The Last of Us: Joel actor didn't play the titles and that's for 2 good reasons

The trouble with the hub worlds is their unwavering confidence that you’ll love collecting stuff. Scattered all over them are shiny bricks that are marked on your minimap. You’ll need them to upgrade your many skill trees, which offer health and damage upgrades and more ways for you to earn Lego bits.

Collect your first Kyber Brick and a pop-up will announce that you’ve pocketed one of over a THOUSAND. Complete a mission and it’ll run you through the challenges you completed – or didn’t – the bricks you got – or didn’t – the Lego bits you collected – or failed to – and you get the idea – or do you? The Lego games have always had quite a bit of this, but in rewarding you for collecting all these different things The Skywalker Saga seems to forget that it’s unrewarding when you don’t. It pushes all its chips into the center of the poker table and says, “all in” on collectibles. It firmly believes you’re someone who likes collecting bricks, so it’s too bad if you don’t.

Entering the collectathon hub zones would be better if it was filled with tidbits of lore for Star Wars fanatics, or excellent puzzling or platforming. Really, though, a lot of them are micro-puzzles where you’ve got to place one block on top of the other to reach a high spot. Maybe swap characters from Hero to Jedi, so you can use the Force to pull something within reach. Sure, it’s quite satisfying when those Kybers enter your possession with a bang of confetti and a fist-pump, but turn it over in your plastic palms and you quickly remember it’s one of a thousand bricks.

And the more hub worlds you encounter, the more jaded you become. You see the icons flood the mini-map and you simply… can’t be bothered anymore. Unless you’re a completionist at heart, the challenges they offer aren’t interesting enough to chase them down. So many times I’ve racked my brain over trickier puzzles, only to give up on them. Why? Because all that lies at the end of the puzzle is another silly little Kyber Brick.

Lego Star Wars: The Skywalker Saga works when it’s slower and more methodical with its story moments. When you’re activating comms towers with a mixture of climbing and puzzling. Rebuilding bits of your ship and chucking in some light combat to break things up a bit. Perhaps disguising yourself as a Stormtrooper to bypass security. But these moments are few and far between.

The game’s emphasis is on the collectibles, but taking them out would see the game crumble like a Jenga tower collapsing. Rather, the tower’s vista would be cleared of obstructions, giving you the a chance to see the galaxy clearly again. The collectibles feel like padding to line the large gaps in the story in a way they weren’t in older Lego games. If you’re happy to hoard bricks and partake in a simple Star Wars romp, then you’ll likely love the stodge. But if you’re after a Lego Star Wars saga that takes its time, you might be left disappointed.