In Destiny 2, players want to hunt a new weapon, but Bungie must have messed it up 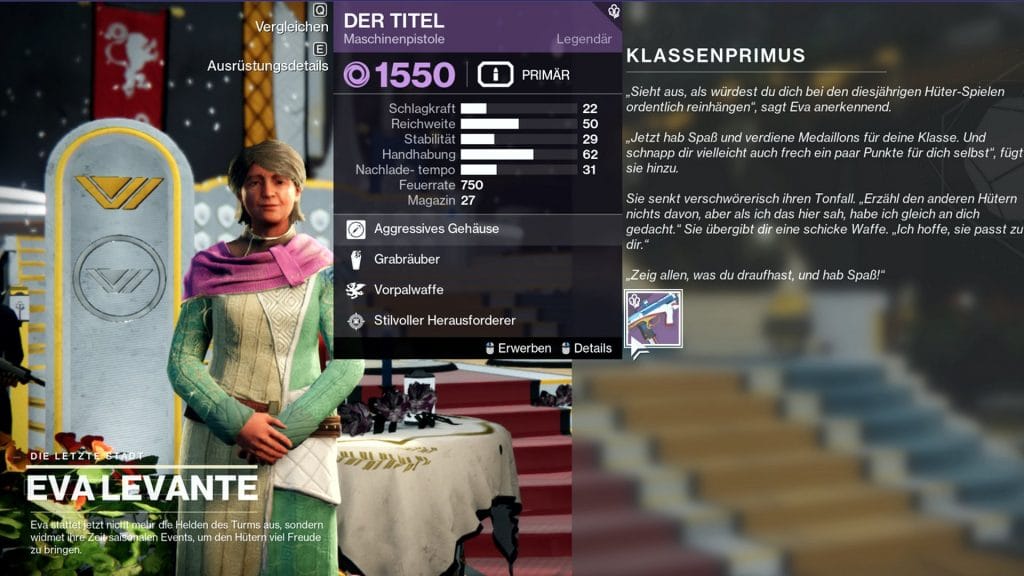 In Destiny 2, the Guardian Games 2022 are currently beckoning with a new powerful weapon that offers a unique advantage. But those who wanted to get hold of a good roll quickly at the start of the event were disappointed. A bug crept in and prevented players from farming other variants of the weapon. MyMMO tells you what happened.

Guardians in Destiny 2 have warmed up to earn Platinum Strike Medals for their class. In addition to this fundamental class struggle, however, the new Void submachine gun “The Title” was an interesting carrot for the players. So many people stopped by the 2022 Guardian Games last night.

How strong exactly? Of course, the Guardians wanted to find out for themselves and queued up to Eva to get the Guardian Games quest “First in Class” and then also to get hold of the first version of the submachine gun “The Title”.

The weapon also initially dropped as planned after completing the quest to any player with the Vorpal Weapon and Tomb Raider perks.

But after that it was over, because a bug crept into the 2022 guardian games and caused long faces. Vorpal Weapon and Tomb Raider should remain the only perks that many players could get from the submachine gun during Guardian Games 2022.

Which bug has crept in? Anyone who tried to farm more rolls of the weapon after the quest with Eva was disappointed. Due to incorrect drop rates, it was not possible to farm any more rolls apart from this first variant of the weapon, and Bungie is already aware of this bug.

Players are disappointed: This information is particularly disappointing for the players because for many the weapon is the only highlight of the Guardian Games 2022 and that is exactly what is now bugged.

So if you put your time into getting as many bronze, gold, and platinum medals for the gun as possible, you weren’t rewarded for it. For platinum medals, the effort is particularly high.

This is how the player Ace935 writes on Twitter about his experience:

I played about 3 hours between legendary lost sectors and the new playlist, earned laurels and received platinum medals, […] and got nothing but the quest reward.

While the player Captain Hugman disappointedly adds to the community manager:

Oh. Good. I wish I had known that earlier. Thanks for letting us know though.

When should the bug be fixed? It is currently not known exactly when Bungie will address the problem. At the moment, however, the developer is asking players to first register in the Bungie Help Forum report and share their experience there if they have not received the weapon either.

But that’s exactly what causes even more resentment among the players. Frustrated players even accused Bungie of intention behind the bad drop rate.

See also  In the new MMO Palia, testers destroy the game by baking too many cakes

On YouTube, the player IoTheKingOfGames justifies this as follows:

bugged? More like having to play 1000 hours just to get one. It’s on purpose. It’s all about the “engagement” of the players. Bungie is good at it. Of course it’s bugged. […] this is a recurring pattern at this company.

And the player Yoshi Fenris adds:

They say that every time something has a 0.00000001% chance of falling. They lie and just want us to keep playing the game so they can show the “engagement” stats to their investors.

After all, “The Title” is the first weapon in Destiny 2 that every player in the same role has. Apparently there is currently no player who can score with a perfect godroll of the weapon. Nevertheless, the players hope that the bug will be fixed quickly. As soon as Bungie announces something about this, we will of course update this article for you.

Please share your experiences in the comments. Were you able to get more rolls of the weapon “The Title” in the Guardian Games 2022, despite the bug, or did the bug also haunt you? Also, let us know how you like the weapon so far.