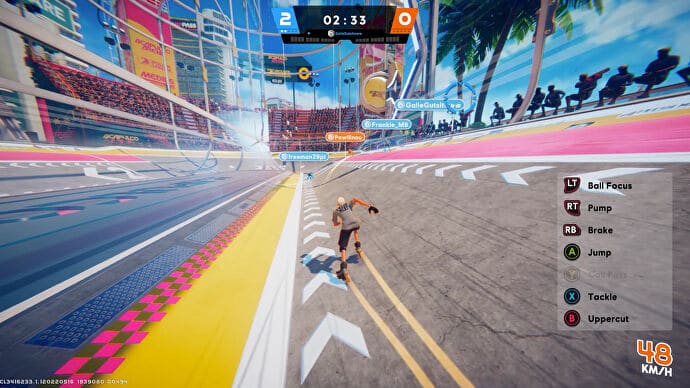 Roller Champions is a free-to-play rollerbasketderbyball mash-up that’s been a long time coming. I mean, Matt Cox (RPS in peace) said it was the best game at E3 2019 when it was due out in early 2020. Then it got delayed to early 2021. And now the game’s first season has – *double checks* – finally arrived.

So, Ollie, Liam, and I strapped on our skates and jumped into a few games to see how it’s getting on. Ollie had some experience with the game before, while Liam and I went in totally blind. We all emerged from our play sesh glowing with praise albeit with a tinge of worry. Would it get any traction, or quickly succumb to the cheery sports game curse?

Ed: Alright, I think we’re all agreed that Roller Champions has strong Knockout City and Destruction AllStars energy. It’s got that same heady mix of sports and happiness, like an athlete sponsored by Shakeaway. Having rolled around for a bit, do you guys see yourselves going back?

Liam: You know what, not only do I see myself playing more of this, but I’m actually quite excited to strap my skates on and roll back in. I’ll admit I went into Roller Champions with incredibly low expectations, but I was pleased to discover a rock-solid multiplayer game that contains way more depth than I thought it would. I am – however – completely hopeless at it, so I think it’s worth hearing from our resident expert on what he thinks about it.

Ollie: Honestly, I was fairly enamored by Roller Champions back when I first had the chance to try it out decades ago in 2019. But now it seems there’s so much more to all the moves you can pull off to wrong-foot your opponents and put together those glorious team plays that were the highlights of our entire play session. At this point the game really does seem far stronger than it has any right to be.

I went in expecting a major yawn fest and came away with patches of sweat under the armpits.

Ed: I feel the same way as you Liam. I went in expecting a major yawn fest and came away with patches of sweat under the armpits, a telltale sign that I’ve exerted myself in a manner befitting a good time. Yes, it took a while to get into the flow of rolling around and learning how to hop and tackle and uppercut. But once I’d learned the wheels, I was totally hooked in. The game feels excellent in the hands – or feet, I suppose.

And I reckon the game’s excellent rhythm comes down to its ruleset, which is simple, yet deceptively dense too? Like, the more confident you get as a rollerblader, the more risks you’ll take whizzing around the velodrome looking to rack up a massive 5-pointer.

Ollie: So, quick rundown of the rules. You’ve got 2 teams of 3, and the aim is to score more goals than your opponent. The goal hoop is stuck on the wall at one of the four checkpoints (known as “gates”) spread around the loop. To score, you must pick up the ball, carry it through all four gates to complete a lap, and then throw the ball through the hoop.

Ah, but that’s not all. You can choose to complete just 1 lap to score 1 point, or you can try to push your luck and go for more laps. Completing 2 laps means if you score you earn 3 points, and completing 3 laps will earn a whopping 5 points for a goal. That will also end the game immediately, because the first team to reach 5 goals wins. But it’s a risky tactic, because if you get tackled and your opponent picks up the ball, then you lose all your progress and must start from the beginning.

Liam: Can we talk about tackling? While you were both occupied with less important activities like scoring goals, I was mastering the art of hoying myself into our opponents, sending them flying like carrier bags filled with loose mince. Tackling in this game is surprisingly violent and very funny, which is great considering how often you end up doing it. I may not have been good enough to earn us any points (I think I missed every shot I attempted during our play session), but I was great at roleplaying as a cage fighter in a pair of roller blades.

Ollie: Yeah, I’m glad there’s no referee in Roller Champions. Whenever I had the ball, I tended to turn the camera around so I could see how closely my opponents were on my tail. So often I’d see the opposing players inching closer and closer until they got absolutely bodied out of nowhere by a flying Liam. It’s enormous fun, but it’s also a big part of the game’s skill curve. People who know how to tackle in different ways, and how to read opponents and deliver different kinds of dodges to avoid those tackles – they’re the players to really watch out for. Not that we saw many of those. Most of us press people were just kind of flopping about learning how to stay on two feet.

Ed: I think it’s cool that the game lets you fulfill a role depending on how comfortable you feel on wheels. If you’d rather tackle folks, then you can sit back and help your designated striker (Ollie, because he’s a pro-gamer) thread the needle by swatting opponents out of his way. And maybe once you’re feeling more confident in your passing and weaving, you can step up and be the mid-fielder. Despite the game’s skill ceiling, anyone can have fun with it.

Liam: I’d definitely encourage everyone to at least give it a try, especially considering it’s free. My main worry with games like Roller Champions is that it’s so easy for them to vanish as soon as they’re released. The market for free-to-play multiplayer stuff is so saturated, quality doesn’t guarantee success either. There’s a lot to love about Roller Champions, and it’d be a shame if folks don’t at least give it a chance, but my worry is in an era of Fortnite and Warzone it’s a tough sell.

Ollie: I’ll use this moment to talk a bit about Rocket League, because I don’t think we can get away with writing this post without mentioning it. I’ve put over 1,000 hours into Rocket League, and it’s undeniably a shadow that looms large over Roller Champions and every other kinetic competitive sports game out there. Liam’s right: I’ve seen similar games that I absolutely adored get shut down because no one played them. And there’s a very real chance the same will happen here.

The thing Rocket League has going for it is that it’s just football. Everyone knows it, everyone gets it straight away, despite the monumental skill ceiling. I feel like Roller Champions might scare people off a little bit by being something new, even though I think it takes far less time to learn the rules than most real-life sports like football. But I really hope people give it a go, because there’s a treasure trove of unexpected depth and satisfaction to be found here. We haven’t even talked about the more advanced tricks and mind games you can pull on opponents, the last-second passes and dodges, the sneaky rolling of the ball along the ground only to uppercut yourself high into the air and soar after it to get past the last remnants of the opponents’ defences. It all feels so good. It clicks.

Ed: Oh man, now you mention it, I can’t get this one play out of my head. I remember you, Ollie, clinging onto my back – yep, that’s a thing you can do – and propelling yourself past the enemy team. I managed to lob the ball over to you and, naturally, you sunk it into the goal with ease – outstanding stuff. And it wasn’t like this sequence of events was super difficult to pull off. Unlike Rocket League and its outrageous skill ceiling, performing cool things in Roller Champions comes far more easily, I think. I do hope people give it a chance, as it’s far easier to hop in, strap on those boots, and perform *clears throat* sick plays than its more finicky counterparts.

Now, enough gushing. I think it’s about time we had a nice chin scratch and grumble. Is there anything you’d like to see tweaked or improved?

Ollie: I think the core systems are near perfect. The only thing I’d love to see is more variety in the arenas. There are three different loops to choose from, but they’re all functionally identical. They only differ in cosmetic appearance. I was talking to my brother about the maps earlier, because he saw me playing around in the skate-park training area and thought the game would be much more interesting if all the maps were like that, a big bevy of crazy ramps and obstacles. I half-agree: I think the loop has to be part of the arena in order for the game to work as well as it does, but I also think they could have a lot more fun with the differences between the arenas, adding obstacles, ramps, speed boosts, and so on. It’d be particularly cool to see a map where the middle bit tapers off partway up, becoming a ramp that allows you to move from one side straight through to the other, instead of just stretching up to the ceiling to create an impassable barrier. Stuff like that could help keep a willing playerbase interested.

Liam: I completely agree. With such a strong foundation already in place, variations to that core formula could potentially make this game sing. I was thinking yesterday about a mode with two balls, which would force teams to ramp up their offensive tactics as much as their defensive plays. It’s quite exciting to discuss a live-service game while it’s still in its infancy, isn’t it? The possibilities are endless!

Ollie: Ooh, ooh, what about a hot potato style game mode where the ball can’t be carried by one player for more than a few seconds, so you have to just keep passing it?

Sorry, got carried away with the ideas there. Continue.

Ed: They could go full Knockout City and just have dodgeball on rollerskates. Maybe a Fall Guys-esque thing where there’s no ball at all and you’re just hopping over obstacles in a desperate bid to survive. God, I’d love that.

Liam: These are all genuinely great ideas. Honestly, I’m itching to dive back in now that we’ve been chatting about it. I even considered buying a real pair of rollerblades this morning. This game has ruined me.

Ollie: Ubisoft definitely has enough clout and money to take Roller Champions in a really exciting direction post-release. All they need are players. I think it’s safe to say the game has very quickly won the three of us over. I hope the rest of the world follows suit, or one of us might end up having to write another depressing post-mortem in a year’s time.

Ed: Come on everyone, give Roller Champions a chance. Do it for Ollie.