Sniper Elite 5 review: too much sprinting, not enough sharpshooting 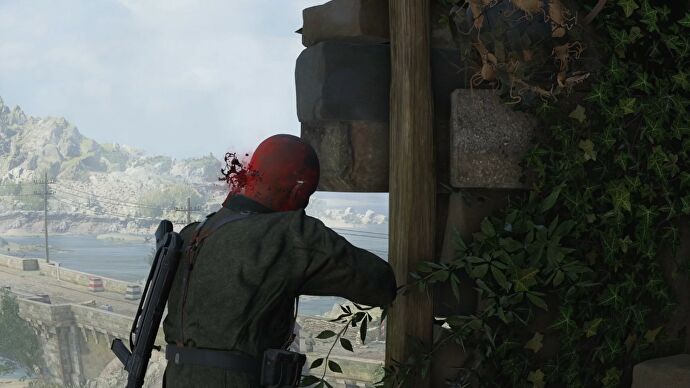 Sniper Elite 5 review
Sniper Elite 5 brings back the series’ signature sharpshooting, but its rigid close-combat objectives force you out of the sniper nest too often.

Karl Fairburne, the titular Sniper Elite, is a pro at pinging baddies in the distance. The master of shooting Nazis in the balls across hundreds of metres. It’s a mystery, then, why the French Resistance constantly hand him objectives that require close-quarters combat. “Sneak into this chateau,” or “blow up that radar,” they say, probably with a smirk assuming that he won’t be able to pull it off. He can, of course, but it’s a monotonous series of missions that rarely asks you to get inventive with your trusty rifle.

Like past games in the series, Rebellion’s Sniper Elite 5 features a campaign that spans eight missions, each one with a large map and a few main objectives. One of these is usually something to detonate or steal; some key intel that you must retrieve, or a radar tower that the French Resistance wants to destroy. That primary objective is paired with an assassination target from the Resistance’s kill list.

The early stage of each mission is often the best: you enter the map, find a vantage point, and use your binoculars to survey what lies ahead. You can scan around the various points of interest, such as scattered security checkpoints, fortified towns, and enemy encampments, to mark enemies, alarms, and other noteworthy details. As you notice new areas, you’ll also get some optional tasks on your objective list. You might spot a bunker that you can destroy or a hidden item to steal, the locations of which get marked onto your map.

While you’re hunkered on a hill, it’s a perfect chance to do some sniping without fear of getting spotted, as most maps have noises that regularly occur to mask your shots. A noise bar pops up at the top of the screen to let you know when one of these sounds, such as a plane flying overhead or a turret firing in the distance, is about to play. This gives you an opportunity to prepare your shot and fire at the right time, slowly thinning out guards across the map without breaking stealth. Each assassination is simple and satisfying, and might also open new paths to your objectives as you clear heavily-guarded paths and encampments. Picking off the designated kill list target in each mission is especially fun, as they’re clearly designed in a way to make you think about your position before taking the shot.

However, other objectives don’t require as much forethought. At first, I looked for creative ways to complete my objectives, firing at explosive barrels in an attempt to destroy bunkers and other targets. Unfortunately, the explosions had little effect and I had to sprint across the map and plant satchel charges before these targets actually blew to smithereens. Sniper Elite 5’s approach to mission design seems too rigid in that regard, often stifling more creative approaches with endless to-ing and fro-ing to tick off your objectives. In a game series that’s known for its gory X-ray cinematics of exploding organs and shattered spines, the sheer amount of time spent scurrying around seems intent on making those killcams occur less often. This isn’t exactly new for the franchise, as Sniper Elite 4 also had its fair share of running between objectives, but it continues to detract from its most iconic feature.

As you’re repeatedly thrust into close quarters situations, you’ll wonder why you ever trained as a sniper in the first place.

Worse still, the more sniping I did, the less interesting these sprints actually became, as environments devoid of enemy guards lose all sense of drama and tension. Even if you decide to spare a couple of guards from time to time, sprinting around the map remains a low point for Sniper Elite 5. As you’re repeatedly thrust into close quarters situations, you’ll wonder why you ever trained as a sniper in the first place. Indeed, when it comes to the rest of Fairburne’s combat abilities, the lack of mechanical depth to master makes each encounter feel identical. Stealth requires a more careful approach, but still feels like an afterthought when your options only extend to a couple of distractions, a silencer, and some melee takedowns. Each of these systems feels shallow compared to sniping skulls from afar, and each journey in only made me feel hungry to get back to those far away hills.

I should note, though, that all the campaign missions are also available to play in co-op, and I suspect this made help alleviate some of the sticking points I’ve mentioned so far. Playing in co-op lets you coordinate your roles a bit more, for example, so you could have one player sniping throughout while the other does the grunt work on the ground, but it still feels like you’re drawing the short straw a bit whenever you have to toss the sniper aside and get closer to the action.

It’s also a shame to be forced into such tight, bland environments when Sniper Elite 5 looks gorgeous at a distance. From your vantage point, the various maps set in Southern France are picturesque landscapes that occasionally surprised me with their fidelity and detail. Mission 3 in particular struck me with its mist-veiled coastal town, which I had to stop and screenshot. In sharp contrast, the buildings and bunkers that often serve as objective locations are muddled mazes of beige and grey.

Fortunately, when you aren’t being fed through corridors to find objectives, Sniper Elite 5’s new weapon customization system makes sniping more interesting and adaptable than its predecessors. Before hopping into a mission, you can tweak your weapons with new muzzles, barrels, scopes, and a range of other attachments to change their stats, such as handling and damage. All this will no doubt be familiar to fans of other shooters, but it’s a welcome, long overdue addition to Sniper Elite.

Most of these attachments lean towards either run-and-gun speed or long-range control and power, but that small amount of customization does help to further differentiate between the various weapons in a way Sniper Elite 4 didn’t quite manage. It lets you find the perfect setup to suit your playstyle – but creating that ideal loadout only makes it more frustrating when you need to pull yourself away from your sniping nest. There are also workbenches scattered around each map that you can use to change parts during a mission, but this rarely feels necessary. Since each loadout has a pistol, SMG, and sniper rifle, they tend to feel dynamic enough to deal with any scenario without swapping attachments in the middle of a level.

While missions can quickly grow stale in their tiresome loops of running between objectives, Sniper Elite 5’s new Invasion Mode increases the tension and makes missions a lot more engaging. If you have Invasion Mode on, another player can enter your mission as a Nazi sniper and attempt to kill you before extracting. This encourages you to move slower and approach levels more carefully, as the threat posed by another player is much greater than that of Sniper Elite’s AI. A single shot from their rifle could end your mission and force you to go back to the last checkpoint, so you’ll need to use distractions and darts between shadows to stay alive. There are also phones scattered around each map that you can use to mark human players for a brief moment.

It actually reminded me a lot of Deathloop’s Julianna invasions, for better and worse. Their unique outfits and obvious player movement make them easy enough to pick out in a crowd, but knowing they could be watching through a sniper scope at any moment creates a game of cat and mouse that makes Sniper Elite 5’s missions much more thrilling than usual. While this only occurred a handful of times during my review time due to a small pool of players, the game’s crossplay and Game Pass launch make me hopeful that these invasions will be a much more frequent occurence when more players can jump in.

Outside of story missions, Sniper Elite 5 also features a wave-based survival mode and team-based multiplayer. While I wasn’t able to find any multiplayer matches (which don’t offer bots to supplement the single player experience), the survival mode’s emphasis on defensive combat allows you to enjoy sniping without needing to worry about distant objectives and the long sprint in between. There are three survival maps on which you can play through various operations, and each operation tasks you with defending different areas, pushing you from zone A to D as you progress onto higher rounds. With four distinct operations to choose from for each map, there are plenty of combat-focused challenges to explore here that make an enjoyable alternative to the main campaign. As you’d expect, the waves of enemies aren’t as well-constructed as the campaign’s more complex set-pieces, but being able to focus solely on defensive combat strips out the tedium found in the main missions.

Sniper Elite 5 maintains the series signature sharpshooting across some gorgeous locales, but its renewed emphasis on close-combat encounters often feels like a shallow sidestep away from your rifle, leaving objectives feeling flat and monotonous. The game’s at its best when you can sit back and snipe like a champ, but when the campaign constantly forces you into tight, muddled environments, it ends up distracting you from that glorious sharpshooting. The new Invasion Mode ups the ante and makes missions more tense, while the new weapon customization system lets you personalize your sniping experience, but the amount of time spent sprinting around means that Sniper Elite 5 often fails to hit the mark.