Stranger Things: Here’s what to expect in season 4 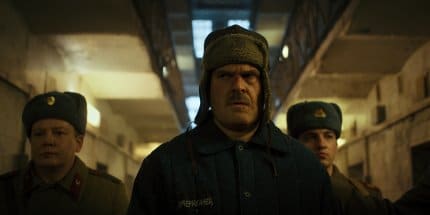 It’s been three years since the finale of Stranger Things season three. The excitement with which fans await the start of the fourth season of the popular Netflix series is all the greater. The first trailers show: Stranger Things has grown up – and a whole lot darker. We’ll tell you what to expect… could be! After all, you can never be sure about Stranger Things!

Hawkins and the Wide World

At the beginning of Season 4, the former clique around Mike, Will and Elfie aka Eleven is scattered to the four winds. Will and Elfie have moved away from Hawkins with their parents and are trying to adjust to their new surroundings. But the two are not the only ones who have had to leave their old hometown.

Sheriff Jim Hopper, believed dead by the other characters, was transported to Russia where he is now being held captive in a USSR testing station. As seen in the trailers, he doesn’t stay there long though. Hopper instigates a prison riot in hopes of somehow getting back home.

How the Soviet-Russians are connected to the Upsidedown is just one of the questions season four aims to answer. Other mysteries that remain unsolved include what the Upsidedown actually is and how Eleven got her powers. Now she seems to have lost it. In return, clique member Max suddenly begins to float in the trailer. There should be answers to all of this – and of course a new villain who makes life hell for the kids from Hawkins.

Clear the stage for Vecna

Like its predecessors, the new Season Four foe is named after a monster from the Dungeons & Dragons role-playing game. In season 1 the kids met the Demogorgon, seasons 2 and 3 their big enemy was the Mind Flayer. Now they face one of the most famous villains from the Dungeons & Dragons universe: Vecna, a necromancer who wants to roleplay as a god.

See also  New grenade in CoD Vanguard is completely OP, turns maps into a hell of a sea of ​​flames

As with the other monsters, Vecna ​​has little in terms of looks and powers

shared with the D&D role model. In the game, he’s an undead mage with little more than a hand and an eye left in places. In Stranger Things, he looks like something that came out of a David Cronenberg movie. Both Vecnas have one thing in common: While the Demogorgon and the Mind Flayer were inhuman creatures whose motives were difficult to understand, Vecna ​​seems to have been human at some point.

Some fans are therefore convinced that Vecna ​​is none other than Billy. He was possessed by the Mind Flayer in Season 3 and eventually rendered harmless. Another variant: Vecna ​​is Dr. Martin Brenner, Eleven’s creator, whose fate remains unclear. Or Vecna ​​is the alternate identity of Victor Creel, a new character who debuts in Season 4 but whose house has caused problems in the series.

Lots of horror and long episodes

As you can see, Season 4 of Stranger Things is going to be a tad darker than its predecessors. Understandable: The kids from Hawkins are slowly growing up and with every adventure they go through, they also get closer to the great mystery of Stranger Things. The dark atmosphere and horror are also two things that received a lot of praise in advance. However, this seems to be at the expense of the humor and the slightly ironic nature of the series. There is probably a lot less of it than in the previous seasons.

See also  Candyman Review: A 2021 Reboot Made For The Wrong Audience

Another innovation, on the other hand, causes less enthusiasm. The episodes of the fourth season of

Stranger Things: Season 4 is set to be a lot darker.

Stranger Things is incredibly long, even by Netflix standards. The first episodes average 70 minutes, episodes eight and nine each last 90 minutes, and the season finale is said to be more than two hours long. If you read the first reviews of Season 4, then that could be a problem. At least some of the reviewers think that the episodes of Stranger Things are clearly too long and, above all, too long-winded. The main factor here seems to be how much the viewer likes the rather large cast of characters and the myth that surrounds Hawkins and the Upsidedown. Both get a lot of space, which probably leads to a somewhat leisurely pace.


Get back to the stories of the Duffer Brothers and tune in for the start of Stranger Things Season 4 on May 27, 2022! New trailer!


Stranger Things season 4 in new pictures: Elf and her friends are much older, but continue to experience mysterious (!) Adventures.

Viewers can find out for themselves from May 27, 2022 whether that’s true and whether the horror of Stranger Things has really eaten up the humor. Then the first episodes of the fourth season of Stranger Things are coming to Netflix. The finale of the penultimate series season can then be seen on July 2, 2022.