ESO: The best thing about the new areas of High Isle are the open dungeons 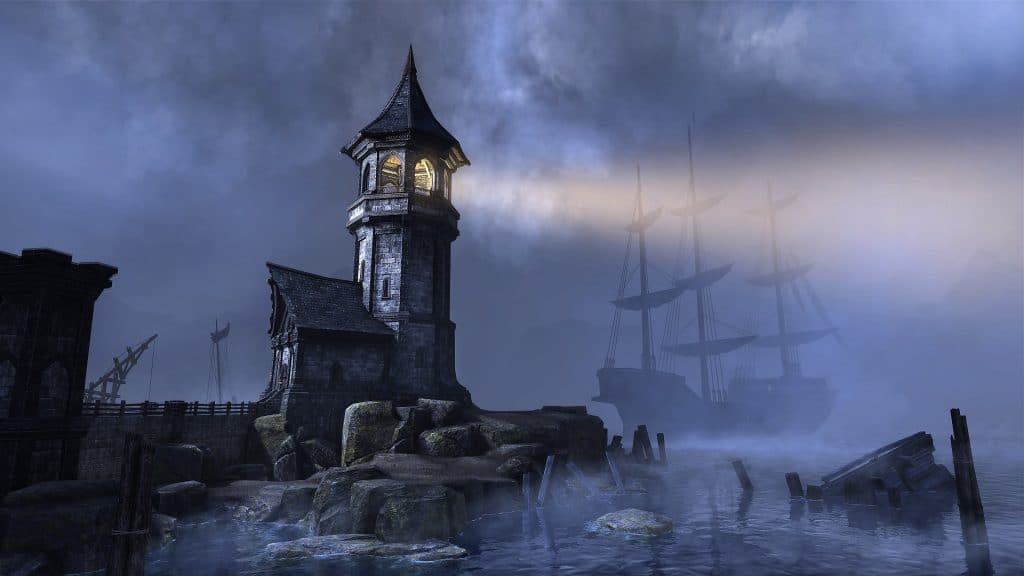 On June 6th, The Elder Scrolls Online releases the new expansion High Isle. The brings some innovations, including the card game, two companions, 30 hours of new story or a new trial. But MeinMMO editor Alexander Leitsch was particularly taken with the open vaults this time. Because they are particularly atmospheric and, above all, varied.

As part of a preview event, I toured High Isle and the new content with Zone Lead Ed Stark and Lead Designer Jeremy Sera. After the first few seconds, everything in the new areas screams Europe and the Middle Ages. Unsurprisingly, considering the story revolves around the Bretons – and they’re sort of the Middle Ages personified.

According to the two developers of ZeniMax, the southern part of the island is reminiscent of southern Europe, with beautiful coasts and wide meadows. The north, on the other hand, is dominated by rocks, cliffs and stumpy trees, as it is supposed to be in the more northern part of Europe.

But neither the landscape nor the medieval fortresses inspire me. Everything has been seen before, both in ESO and in dozens of other MMORPGs. However, in the course of our tour we will enter the northern island of Amenos and the three public dungeons of High Isle.

And they really ripped it out atmospherically.

The first dungeon that we only briefly entered during the event was the Crimson Coin Tower. Located in the northern part of the High Islands, it is home to a mad wizard. To get there, you have to cross over with a small boat.

I was immediately impressed by the slightly confusing paths that lead through the tower. Instead of obviously following one or more paths, there are gates that suddenly take you from one side of the tower to the other. The dungeon also has hidden treasures and a final chest with useful rewards.

Overall, the tower left such a positive impression that I visited it again after the event. However, the end boss of the open dungeon was not defeatable for me alone. I liked that too.

The northern island of Amenos has a character all of its own. There is only one outpost on it – the fortress of Amenos. From there, the Bretons sent convicted criminals out into the wilderness to live forever or be eaten by monsters. They didn’t care about the result.

Escape from the island is said to be impossible due to the dangerous reefs and currents around it. This is exactly what the Ghost Harbor Bay, the second open vault, is all about.

Here you will meet pirates who have been turned into ghosts and see an old shipwreck that ran aground in the bay. Here, too, the final boss is crisp and takes away more than 50% of my life points with one attack – as long as you don’t dodge.

Similar to the Sorcerer’s Tower, the atmosphere in the vault is special. You don’t just crawl through the hundredth tunnel, you explore a bay.

The third open vault is called Feuertopf and the special mechanics of the cards play a role here. Continental plates meet on the high islands and there is plenty of volcanic activity. The world events revolve around closing volcanic rifts.

In the dungeon you also walk under the open sky at the beginning and only dive into caves underground a little later. Animal creatures in particular await you here, while previously ghosts or people were the focus.

While the preview event was mainly about the areas of High Isle, the new expansion also offers a number of innovations apart from that:

You can find out everything about High Isle here:

ESO: Everything about the new expansion High Isle and the content in 2022

High Isle will not be a high flyer

After two try-out events with the developers and a few hours on the test server, High Isle looks like a solid expansion aimed primarily at veterans. It’s worth buying just for the story, the new areas, and the new sets.

But a special feature was missing, which attracts new players or those who have left the MMORPG for a long time. The card game is a nice idea that adds variety, but it’s not high on the list of features that MMORPG players want. That’s why the hype seems to be missing.

In an interview, Game Director Rich Lambert told us why High Isle isn’t getting a new class: