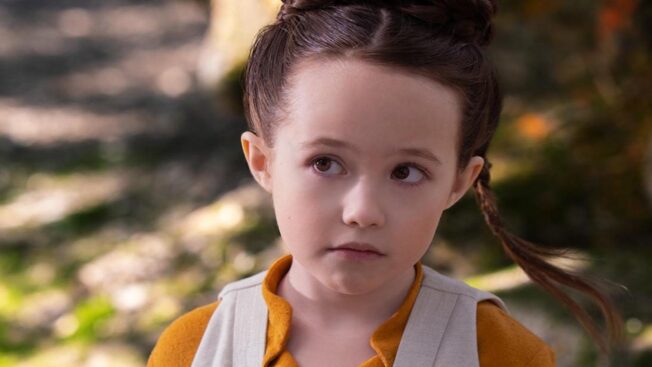 Obi Wan Kenobithe new star Warsseries on DisneyPlushas a real surprise in store for the fans and this is it Return of the character Leia Organa. We see Leia at the age of 10 jumping around the screen and the community just loves it!

And if Obi Wan Kenobi then in secret watching over young Luke Skywalkeryou inevitably ask yourself what the young Lea is doing at the time.

But nonetheless, those responsible kept themselves covered with the figure. There was nothing of her in the teaser material at first and the eyes of the community were all the bigger when they were able to see her in action for the first time in her young years.

Who plays Leia Organa? This is the actress

Leia Organa is portrayed as extremely smart and articulate, who seems far ahead of her years. However, the rebellious and inquisitive 10-year-old becomes more and more interesting as the story progresses kidnapped by bounty hunters and now the question arises: who could save her? An old friend of Imperial Senator Bail Organa? But of course there is more to it and so we see many magical scenes with the young Leia in the first two episodes of “Obi-Wan Kenobi”, whose cast could not be better.

But who is this tough lady in reality? Who plays Leia Organa? Disney enlisted the help of the young actress for Obi-Wan Kenobi Vivien Lyra Blair secured and this decision is paying off. Fans are loving her performance as Leia Organa, and she might just turn out to be a fan favorite of the entire series. She bears a striking resemblance to Carrie Fisher. Her clothing is also based on the character of the classic trilogy.

The American Vivien Lyra Blair (born June 4, 2012) is no stranger to the film business today. She’s a real child star because she already has 2017 at the age of 5 in “Band Aid” played along and in the Waco Miniseries she was also on board in 2018. Here she played the character Serenity Jones.

But first “bird box” gave her the attention she needed. Here she stars alongside Sandra Bullock in an apocalyptic thriller that was well received by viewers. The movie was exclusively on Netflix released.

A few supporting roles followed and at the latest after she was again on Netflix in the Superhero Movie We Can Be Heroes could be seen, the film landscape had them on the screen. Before Obi-Wan Kenobi, she starred in Mr. Corman” and “The First Lady”.

Worth knowing: Incidentally, her voice was heard in the game “Telling Lies” by Annapurna Interactive – as the voice of the character Alba.

Notably, Vivien Lyra Blair is roughly the same age as Leia Organa on the show, which makes her the perfect cast at times.

This makes Vivien Lyra Blair the fourth actress to play Leia Organa in star Wars plays. Carrie Fisher adding an iconic and unforgettable touch to the role, her daughter Billie Lourd played her as a double in Star Wars Episode 9: The Rise of Skywalker, and Ingvild Deila is the actress who is actually in Rogue One: A Star Wars Story you can see.