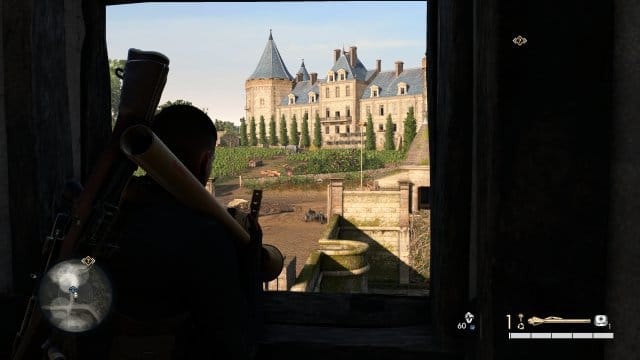 France instead of Italy

Anyone interested in the stories of the Sniper Elite games? Every gamer knows Solid Snake, Sam Fisher and Agent 47, stealth fans also know who Garrett and Corvo are (for everyone else: the main characters from Thief and Dishonored). But who flinches at the name of Karl Fairburne? The less than charismatic soldier has mastered all previous parts of the series and has mostly done well, but he certainly won’t get a star on the games walk of fame. That doesn’t change with Part 5 either, so I don’t want to bore you with details of his relationship with the French Resistance or the US Generality. But it is important: After the last missions in North Africa (Sniper Elite 3) and Italy (Sniper Elite 4), Karl is going to France this time, namely in 1944. To help the German occupying forces develop the miracle weapon “Project Kraken”. prevent him, he travels to many interesting locations, for example assassinates on the Atlantic Wall or infiltrates the English Channel Island of Guernsey. Graphically particularly impressive is a quiet trip to the Mont Saint Michel – the Klosterberg is almost as impressive a postcard motif in the game as it is in reality.

Not a good idea: use collectible weapons like the bazooka only in extreme emergencies.

Speaking of graphics: I tested Sniper Elite 5 on the PS5, but I wouldn’t attest to the next-gen look of the game. The game looks neat to appealing, runs mostly spotlessly clean and has a few fine textures at the start. Elsewhere there are wooden animations or mediocre modeled enemy people – so Sniper Elite 5 is not dramatically prettier than Part 4. The bloodthirsty kill camera with bursting organs and bone splinters flying around in slow motion is very similar to the predecessor, and meticulous players are also annoyed about clipping errors when killed Nazis suddenly drop their weapons. And yes: shot testicles or perforated lungs in slow motion can of course be considered tasteless, and looking at them doesn’t feel so spectacular anymore because you’ve known them for years. 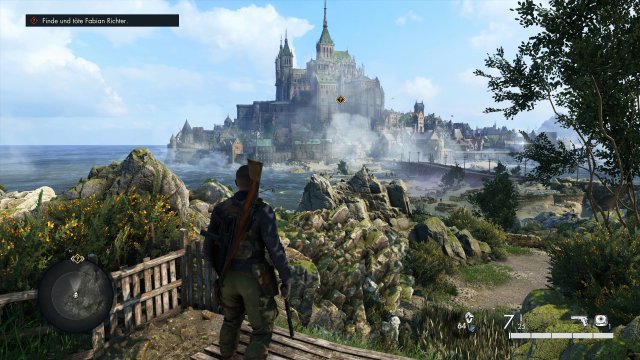 Excursion to Mont Saint-Michel in Brittany: This area is the visual highlight of Sniper Elite 5.

Anyone who has played part 3 or 4 knows how the rabbit runs in terms of gameplay, everyone else pays attention now: Sniper Elite 5 is a stealth shooter that is played in third-person view. Fairburne can move standing, crouching or prone, hides in tall grass and automatically leans against waist-high boundaries like walls or boxes. He can whistle or throw bottles to distract patrols from their paths or to lure individual soldiers away from a group. The unfortunate then gets a few bullets from the silenced revolver in the head and body, or is stabbed in hand-to-hand combat; The latter variant is safer and also works well if Karl is spotted and sprints through trenches. In general, you should – surprise! – of course, avoiding attracting attention, because in the fight with several firing enemies, Karl will lose out. 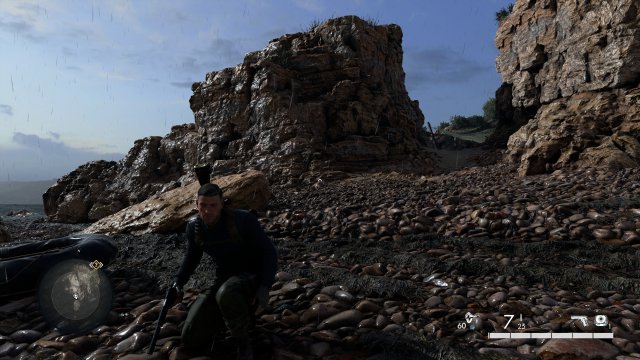 Good textures: Some level wallpapers promise a bit of next level magic.

If, despite a well-integrated visibility indicator, a guard notices your actions, there are several options: Inviting in, of course. Because Sniper Elite 5 lets you save at any time and regularly creates auto-saves, it is likely that the last save point was not long ago. Option No. 2 is to flee: Enemies previously marked with binoculars change to yellow (searching) or red (fighting) status and are marked with icons in the field, making it easier to smash. On top of that, a sign marks where you were last seen – a sober but helpful implementation of Splinter Cell: Conviction’s “last known position”. If you then gain a few meters and dive into the long grass (bushes are “stable” level objects and unfortunately don’t allow that), you’ll escape with your life. If you prefer to shoot your way through, you have a real chance of surviving on the two lower levels of difficulty: the Nazis fall down quickly in the Uzi fire and with a mixture of melee kills in the sprint and regular dressing I have survived many a tricky situation. If you play Sniper Elite 5 cooperatively – all nine story levels can be played in pairs – then the action-packed path is even easier because you can cover each other and see several directions at the same time.