Monster Hunter Rise: Sunbreak is a tough yet accessible expansion 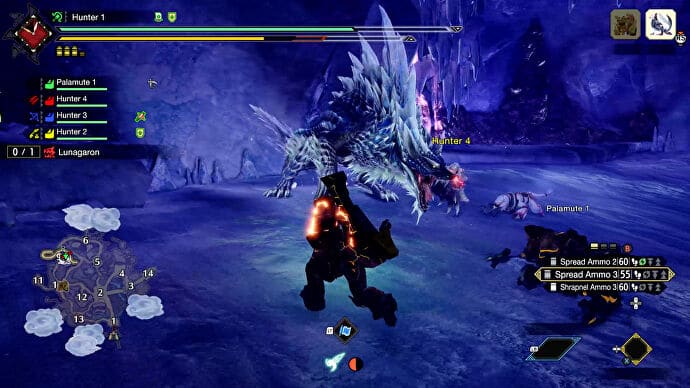 Seregios can get stuffed. I recently faced off against the massive golden dragon during a hands-on session for Sunbreak, the upcoming expansion pack for Monster Hunter Rise, and it battered me repeatedly for the best part of an hour. It has become the flying white whale to my dual blade wielding Ahab, and I left the preview event determined to chop it to bits when the DLC finally arrives later this month.

Sunbreak’s new master rank quests aren’t messing around, basically. It seems Capcom have taken criticisms that the base version of Monster Hunter Rise didn’t provide challenging enough end-game content to heart, and have loaded the expansion with some truly agonizing encounters purpose-built for returning veterans.

I was able to hunt two beasties during my time with the game. Alongside Seregios (ugh), a returning beast that first appeared in Monster Hunter 4 Ultimate, I also faced off against Lunagaron. New to the expansion, Lunagaron is an ice wolf with a massive health pool and even bigger claws. As I chased it through the new citadel locale I was repeatedly caught off guard as it lunged towards me at incredible speed, its attacks chewing through my health bar at an alarming rate. The second I felt I had gained the upper hand, it moved into its second phase, where it sprouted enormous icicles out of its spine and gained the ability to spray a freezing cold beam of death out of its snarling jaws.

Whereas the base game was heavily inspired by Japanese Yokai folklore, Sunbreak’s cast is seemingly based on European creature design instead.

Our battle was as arduous and as thrilling as you’d expect from a late-game mission. Battered and bruised, the beast eventually retired to its underground lair. How apt, that this would be the place that hosted our final encounter. I swapped to a fresh set of silk bind moves and raised my blades, ready to deal the final blow… before the timer ran out and I was kicked back to the hub area. Ah well. Maybe next time, Lunagaron. Despite the disappointing outcome, the mission was an exceptional introduction to what Sunbreak has in store.

Sunbreak whisks players to Elgado, an outpost in a distant kingdom that has been flattened by the elder dragon Malzeno. Whereas the base game was heavily inspired by Japanese Yokai folklore, Sunbreak’s cast of monsters are seemingly based on European creature design instead, particularly those featured in the works of Mary Shelley and Bram Stoker. Malzeno is positively vampiric, its wings and plumage creating a silhouette that resembles a cartoon Dracula. The hulking ape-like Garangolm brings to mind Frankenstein’s monster, albeit with fewer bolts and more moss. Even my mate Lunagaron is lycan-like in both its size and ferocity, although admittedly I can’t remember the bit in Van Helsing where the werewolf froze Hugh Jackman with its ice breath. It’s been a while though, to be fair.

This fresh visual direction is best demonstrated by the citadel, one of the new locales Capcom were keen to show off. Dominated by a ruined castle perched glumly in the center of the map, nighttime hunts plunge the area in a thick purple haze that makes everything appear positively spooktastic. It’s a striking look that helps Sunbreak feel distinct compared to the base game, highlighting that this is more of a traditional expansion pack rather than a simple piece of DLC.

Alongside its roster of groovy ghoulies, the expansion also retrofits a couple of new mechanics that give combat and exploration a bit of much-needed zip. Wall running can now be initiated without using a wirebug first, for instance, a minor change that makes clambering up vertical surfaces way smoother than in the launch version of the game. The biggest addition is the clumsily-named Switch Skill Swap ability, which allows hunters to seamlessly transition between two switch skill loadouts at any point. With each of the game’s 14 weapons receiving new silk bind moves to play around with, Switch Skill Swap enables you to chain multiple moves together into one long combo.

It’s hard to convey just how much this changes the rhythm and flow of combat. By granting the ability to swap between two completely distinct move sets on the fly, Sunbreak literally doubles your options when facing off against a monster. Equipped with my trusty dual blades, for example, I was able to slice, stab, slash and soar without compromise. Thanks to the new spiral slash ability, I basically became a human Beybalde, launching myself towards monsters like a hurricane of steel. My biggest problem with Monster Hunter has always been that combat feels a bit too sluggish for my action-loving tastes, but Switch Skill Swap makes fights feel far more fluid and dynamic than before. It’s no Devil May Cry, but it’s a marked improvement.

Swapping only takes around half a second, but you’re able to initiate a dodge at any point during the animation in case a monster is making a beeline for your hunter. Sunbreak is full of little additions like this. Tiny tweaks that help smooth off a couple of Monster Hunter’s long-standing pointy edges. You’re no longer forced to wyvern ride once you’ve dealt substantial damage to a monster, for instance, while new endemic life incentivises smashing beasts into walls thanks to rings of bugs that explode on impact.

My favorite, and perhaps the most noticeable change for returning players, is how your available moves are now displayed on the bottom of the screen whenever you unsheathe your weapon. With Switch Skill Swap altering your abilities on the fly, it’s a great decision that will no doubt prevent any confusion about what moves you currently have equipped while in the heat of battle. It’s also a neat way to familiarize yourself with the nuances of a weapon without having to dig into your hunter’s notes. Improved UI is an odd thing to highlight when discussing an expansion pack, but hey, that’s Monster Hunter I guess.

See also  eSports obligation for the 1st and 2nd Bundesliga is coming: Bayern and Co. will soon have to kick FIFA 23

Oh, and if you’re an anti-social player, the recently revealed follower quests will provide you with some much-needed company. These single-player only missions pair you up with a character from Sunbreak’s new hub location, who assists you during a hunt. Each NPC has their own preferred weapon and acts like an online partner, passing you healing items and placing traps. During my demo I was joined by a bloke named Arlow, who seemed very capable in his own right, but could only help out so much when faced with both an incompetent hunter (me) and the mighty Seregios (ugh). Out of everything included in Sunbreak, I’m keen to play around with the follower quests the most when the expansion drops, especially considering characters from the base game (such as the hub maidens Hinoa and Minoto) will also join you at certain points throughout your adventure.

Seregios related blunders aside, I really enjoyed my time with Sunbreak. Switch Skill Swap is a genuine game changer while new monsters are sure to offer fresh challenges for returning players. It would be easy to summarize Sunbreak as “more Monster Hunter” but, I guess that’s not a bad thing? I loved Rise, and the prospect of having more of it is hardly a problem, but Sunbreak does feel like something a bit more substantial than that. Perhaps “Rise, but better!” is a more apt definition.

I really do hate Sergios though. My life will not know peace until I can craft its rubbish scales into a lovely piece of armour.

Note: This preview is based on the Nintendo Switch version of the game. All screenshots have been taken from the PC build of Sunbreak via b-roll provided to us by CAPCOM.