Stranger Things: After season 5 there might be a spinoff

StrangerThings has to publish Part 1 a fabulous start of fourth season laid down. Now everyone is waiting the last two episodes of Season 4, then comes season 5 and then it should actually be over. But now it looks like there might even be a spin-off.

That’s what it’s about: The story of “Stranger Things” is slowly but surely coming to an end. Only recently was the long-awaited fourth season published by the albeit the second partl with the last two episodes missing. The whole grand finale is planned for the last and fifth season. But after that it might go even further. 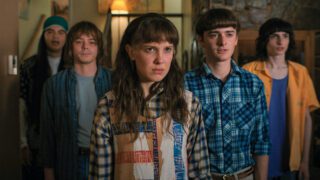 Spin-off idea already exists: A while ago, the showrunners explained that in the world of “Stranger Things” another story or two could exist that would be worth telling – probably also beyond the end of the current story. Now they’re going to be a bit more specific, but unfortunately they still don’t reveal anything specific. Except they’re already working on an idea that exists for a spin-off.

“We think everyone – including Netflix – will be surprised by the concept because it’s very, very different.”

Of course, this stimulates the imagination and leaves us somewhat at a loss. After all, everything could really be hidden behind it, just not the same thing again. But why would a “Stranger Things” spin-off so far removed from the extremely successful template and should be completely different, probably only the Duffer brothers know.

It will definitely be a few years before a kind of spin-off of “Stranger Things” appears. We’re just waiting for the second part of season 4 and then for that final, fifth season to come in 2023.

What do you think of a Stranger Things spin-off? How do you imagine it if it’s supposed to be so different? Tell us in the comments.