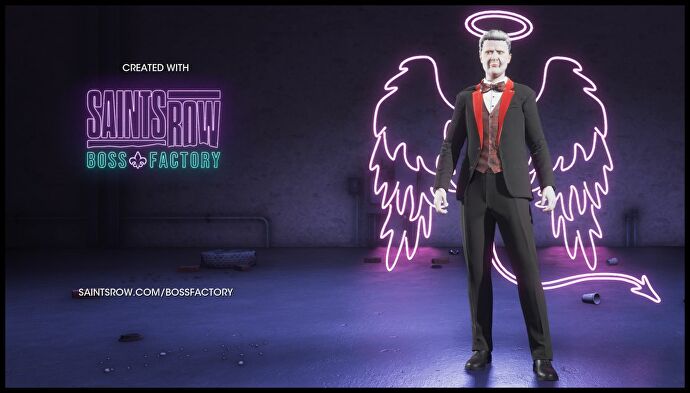 Revealed tonight at Summer Game Fest, you can whet your appetite for the new Saints Row game by making your boss character right now. Described as “the ultimate body shop”, Boss Factory is a free standalone demo you can access in The Epic Game Store (or by following a series of links through SaintsRow.com). In it you can have a ride on the character creator before the game comes out in August, and save your favorite and most bizarre looks. This was revealed with a trailer with all explosions and montages and that.

The idea is that you can “be you” (as in, it the character creator is detailed enough to make someone who actually looks like you) or “be literally anyone” (as in, you can make someone who is all wacky and weird ). In fairness there does appear to be a huge array of clothes, accessories, and ways to tweak your body – plus eight whole voice options, and an animal skull face mask! Here is a selection of different bosses provided as examples:

The boss factory gives you the option to save your completed Boss ready for the game, share it, and download other player creations – and if you share you get two free helemts to use in the game, so that’s nice. If you register for a Saints Row account via the Boss Factory hub then you get “the exclusive Marshall Rocket Launcher” to use in the full game, but I do not know what that is.

Doubtless everyone is all already hard at work making their Sanics and their Benedict Cumberbatches. I am not able to try the Boss Factory because I got a preview code for the purposes of trying it out to tell you more, but then the Epic Store ate it without actually giving me the demo, and now that the demo is out it thinks it’s already in my library. :'( I wanted to be the first games journalist to make Morbius now that Morbius is no longer funny, but that accolade will go to someone else. You can all have at it though.

The full Saints Row game, which is a reboot after the old Saints Row exploded the earth and went to space, is out on August the 23rd this year (after being delayed).