7 games with the best AI 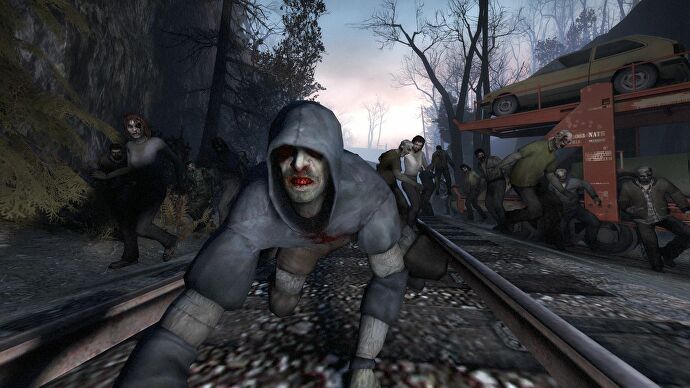 One Off The List is our monthly list feature. Is there something you think doesn’t deserve to be on this list? Comment with your reasons why, and next month it may be struck off.

No, not SHODAN or GLaDOS. I mean the other sort. The magic formulae of raw computer nonsense that runs under the cover of your favorite game and makes enemies flank you, or friendly NPCs toss a health kit just in time. Good AI is not an unbeatable genius. It is smartly stupid. It is both surprisingly clever and capable of wonderful carelessness. It can remind us of ourselves. Quick-witted on a good day, an absolute dunderhead on a bad one. Here’s a list of the 7 best AI in PC games.

Pathfinding is AI. When you turn around in a third-person shooter and the jabroni you’re supposed to be escorting to the helicopter is nowhere to be seen, that’s bad AI. When you plan down a beacon in Deep Rock Galactic and Molly, the jingling robo-mule into which you deposit all your gems, comes storming through a tiny gap in the ceiling and calmly waltzes down a cave wall swarming with hostile bugs, that’s good AI . This machine cash carrier has never let me down. It is so obedient and accurate that the only way it can fail you is if a fellow miner is countermanding your directions. At which point, the only solution is a bullet. And it’s not Molly who’s getting shot.

The Director of Left 4 Dead is an often-mentioned example of beefy AI. It decides when to send a horde of zombies at the players, where to spawn difficult encounters, and when to ease off and give the players time to recover with ammo and health packs. Truthfully, I still don’t know what makes this machine tick. For all I know it could be flipping a coin every three minutes and sending in a horde on Heads and a Witch in a narrow corridor on Tails. This is part of the joy of AI. You can’t know. It’s all some computer magician’s confidence trick. But if it seems intelligent, then hey, it’s intelligent.

The soldiers patrolling Afghanistan and the Angola-Zaire border are a good example of stupid-until-they-are-not AI. They will see a cardboard cutout of a pin-up model in the desert and think: “Oh my god, a beautiful woman!” And this makes you feel superior as you snap another neck. But they will also learn from your tactics over time. Shoot a lot of these dweebs in the head and they’ll start to wear helmets. Gas them and they start donning gas masks. Always visit at night and you’ll notice more soldiers with night vision goggles. The result is an impressive adaptation and escalation of enemy competence. Still won’t stop them getting ballooned into the sky by their belt strap, mind.

If you have ever won a chess game against a computer, sorry, but the computer let you win. You can actually feel this happening in Chess apps on low difficulty, when the AI ​​makes an obvious blunder. It may as well give an unconvincing “ha ha, oops” in the chat. Into The Breach contains no such feeling. The AI ​​kaiju move as you would in their place. Smarter, even. They don’t muck about. The only advantage you have is knowing what they’re going to do next. This is letting us human players display our problem-solving chops without handicapping the cleverness of the AI. It turns the human into a natural defender and the bots into natural attackers. Would you look at that, Into The Breach fixed chess.

Another much-lauded work of AI programming and one more example of clever balance.. The phallus-headed beast of Alien is rendered faithfully frightening through lurid corridor creeping and instakill grabs. Run around the space station Sevastopol making noise and the big lad will show up for dinner. But you can get sneaky and hide in lockers to ride out the intelligence of the megacritter. Good horror lets you take a breather. Which is why, under the hood, the game is measuring how freaked out you are at any given moment. At a certain point, the Xenodork decides “okay, that’s enough scarin’ for now lol” and disappears back into the vents. Thanks, alie– oh god it’s back it’s back move it move it.

The crash survivors of RimWorld are a special case, given that you can tinker with their intelligence in very specific ways. They are a sort of do-it-yourself AI, letting you fiddle with their priorities. Should they drop everything to put out a fire, for example, or should they gather wood and animal hides non-stop without question? After ticking boxes and setting roles, everything in the camp should run smoothly and without incident. But it don’t. Some characters will flat-out refuse to do certain jobs. Others will get high on space drugs, or get into a fist-fight with their roommate for the third day in a row. Many of the other AIs in this list are orderly machines. By contrast, RimWorld’s pawns are chaotic, proving that unpredictability can be just as entertaining as intelligence.

Good enemy AI is smart enough to surprise you with an accurate grenade toss or a suspicious investigation of a locker with footprints leading up to it. But it must also retain plausible shortsightedness, so we feel clever too. That’s the whole point I’m making here. God, have you even been listening? It’s also why the guards and security folk and waiters and valets and hotel receptionists and every other sort of dilly-dallier in the Hitman series gets a five star rating for AI. They will come into a room to investigate a weapon dropped on the floor, but will take a gold bar to the face like a champ. They will identify you as suspicious while you stand at the bar, but lose you on the crowded dance floor. They will post an elite unit of murderers to guard them 24/7, but then dismiss said guards to get a tattoo done by a stranger they have never met. I love these clever idiots.

Last time we scribbled some ideas about the 9 best PC games to play with a notepad. But one of these was an indecipherable collection of spidery handwriting and must be eliminated. It’s… Stardew Valley.

“Stardew off the list,” says farmhand ‘Durgendorf’ with a brutal decisiveness. “I never took a single note and had no problem marrying a hippie who torpedoed my social life, thank you very much.”

So with it. Remember to argue for one of our AI to be eliminated. And to give some examples of AI I have missed. I already know someone out there is typing the letters F, E, A and R in a furious rage. Have at it, friend. I have nothing to hide. See you all next time!