I don’t think Starfield will be the next Skyrim. It has potential for more. 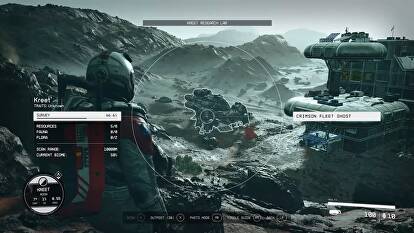 For years we’ve been saying that Bethesda finally needs another Skyrim. A defining game that pays the company’s bills when Arkane throws out a new critic-darling and they ignore it. The obvious candidate has long been Elder Scrolls 6, but from what Starfield just revealed… The world of Elder Scrolls suddenly seems pretty small. Even the whole world of Elder Scrolls, it’s just a planet.

In ten minutes we got brief impressions of an ice planet where some space pirates are hiding. There was one cyberpunk planet and one that looks like a cross between Mass Effects, Star Trek and Guardians of the Galaxy’s Utopia planets. There were also planets whose crust was broken by lava, water worlds and forested areas. We should be able to control all of them, land where we want, shoot at each other with factions, how funny we are.

Starfield sounds like the megalomaniacal dreams you had in the days of a Privateer, like fulfilling the promises of a Star Citizen. Can it all be real, can Starfield even deliver it? Well, yes, I think so. Each of the techniques shown is nothing new. Procedurally generated worlds abound. If you give them enough variables and design the important places by hand, then that’s not a problem. The sheer size and mass then shrinks to an insane amount, but doable work together.

A spaceship engine that is very flexible and can physically implement what you screw together, that’s what the X series has been doing for a long time. Not so nice, but the technology isn’t really new here either. What else you saw, the shooting on the ground, the interaction with the residents of the Uncanny Valley, the lock picking, that’s what Bethesda has been doing since Morrowind and Fallout 3. So yeah, nothing Starfield showed is amazing or unprecedented on its own .

But all together… Nobody has managed that before. Not in conjunction with a full story that follows multiple lines. Sure, you have everything else in Elite: Dangerous and certainly more physically correct there. Over 1000 planets, a No Man’s Sky can only laugh and say “Add 10 zeros to it!”. But all of those individual aspects of those games and 20+ years of Bethesda combined into one game like this? Starfield has the potential not only to be Bethesda’s new Skyrim, it has the potential to be their new Elder Scrolls, their new mega-franchise. Fallout is big, sure, but it was never Elder Scrolls big. It missed its chance when 76 was burnt to the sands and freed too late, while Elder Scrolls Online celebrates new areas and many, many players every year.

Starfield against? It’s all there. It’s all been tested somewhere before. It just needs to come together in this one game now. That’s kind of no sure thing. But after these ten minutes, I’m much more optimistic that it can work.