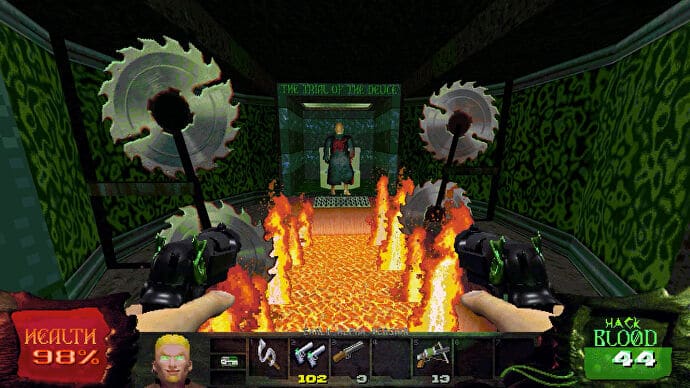 If you played Hypnospace Outlaw, there’s a high chance you’ll remember Zane “Zane_Rocks_14” Lofton. He’s one of the more memorable characters you meet in Tendershoot’s alternate reality web simulator, an angsty teenage boy whose home page is slathered in camouflage textures and GIFS of exploding handguns. Since release, Zane has become one of Hypnospace’s de facto mascots, a beloved dweeb that is abrasive but also kind of painfully relatable? It’s hard to laugh at Zane’s baggy trousers and love for Linkin Park-esque rap metal when you grew up in the mid-2000’s. I mean, we all bought a dog lead from Wilkinson’s and hooked it between the belt loops on our jeans at one point, right? …right?

ahem. Anyway. Announced earlier this year alongside Dreamsettler (a proper sequel to Hypnospace), Slayers X: Terminal Aftermath: Vengance of the Slayer is an FPS spin-off that stars the fan-favorite teen. Slayers X is framed as being an in-universe project that Zane worked on as a teen, and has been uncovered by his now 37-year-old self, who is determined to finally see it released. There’s a short demo available as part of Steam’s most recent Next Fest, and I’m delighted to say it’s exactly what I hoped it would be.

On its surface, Slayers X is a frighteningly accurate portrayal of what a teen in the mid-2000s thought was cool. There are poo jokes. Excessive gore. A butt rock soundtrack. Hidden within Zane’s closet is an elevator that descends into his secret base. Your shields are called Hack Blood. Your shotgun shoots shards of broken glass. “I’m awesome,” Zane growls after you dispatch your first Psyko, the game’s bog-standard baddies who wear long trench coats and no shoes for some reason. It feels like the doodles in the back of a school book brought to life, a game any DOOM-obsessed teenager could only have dreamed of creating back in 2001.

It’s a little stomach-churning, sure, but it works! Mainly because it replicates the look and feel of FPS titles from the era surprisingly well. This isn’t a build engine game, but it could be. It pulls off the same pseudo-realistic look that made Duke Nukem 3D such a hit, and its shooting is as solid as any other modern retro throwback (I refuse to use the term Boomer Shooter, it makes me feel too old). The demo level is a looping labyrinth packed full of secrets to discover and horrible creatures to take down, such as flying skulls wearing jester hats, bin bags full of poo and the previously mentioned shoeless cultists. It’s a competent shooty bang-bang, but I suspect that won’t be the game’s true appeal.

Creator Jay Tholen has alluded on Twitter that the game could tell a subtle story about the “real-world” Zane as much as the game’s exaggerated version of the character, conveying the teen’s naivety about the world through the way he interprets it within this passion project. I think what’s already here is very good – and I would be perfectly happy if it remains as a surface-deep meme game for Hypnospace-likers – but if the full release can pull off this dual-narrative idea it could become something very special indeed .

Still, even in its current form, this is a fun curio that fans of Hypnospace should absolutely check out. There are a few references to the original game, and just the fact that this bonkers project exists is reason enough to give it a try. Zane does rock, it turns out, even if he does canonically hate this website for some reason.