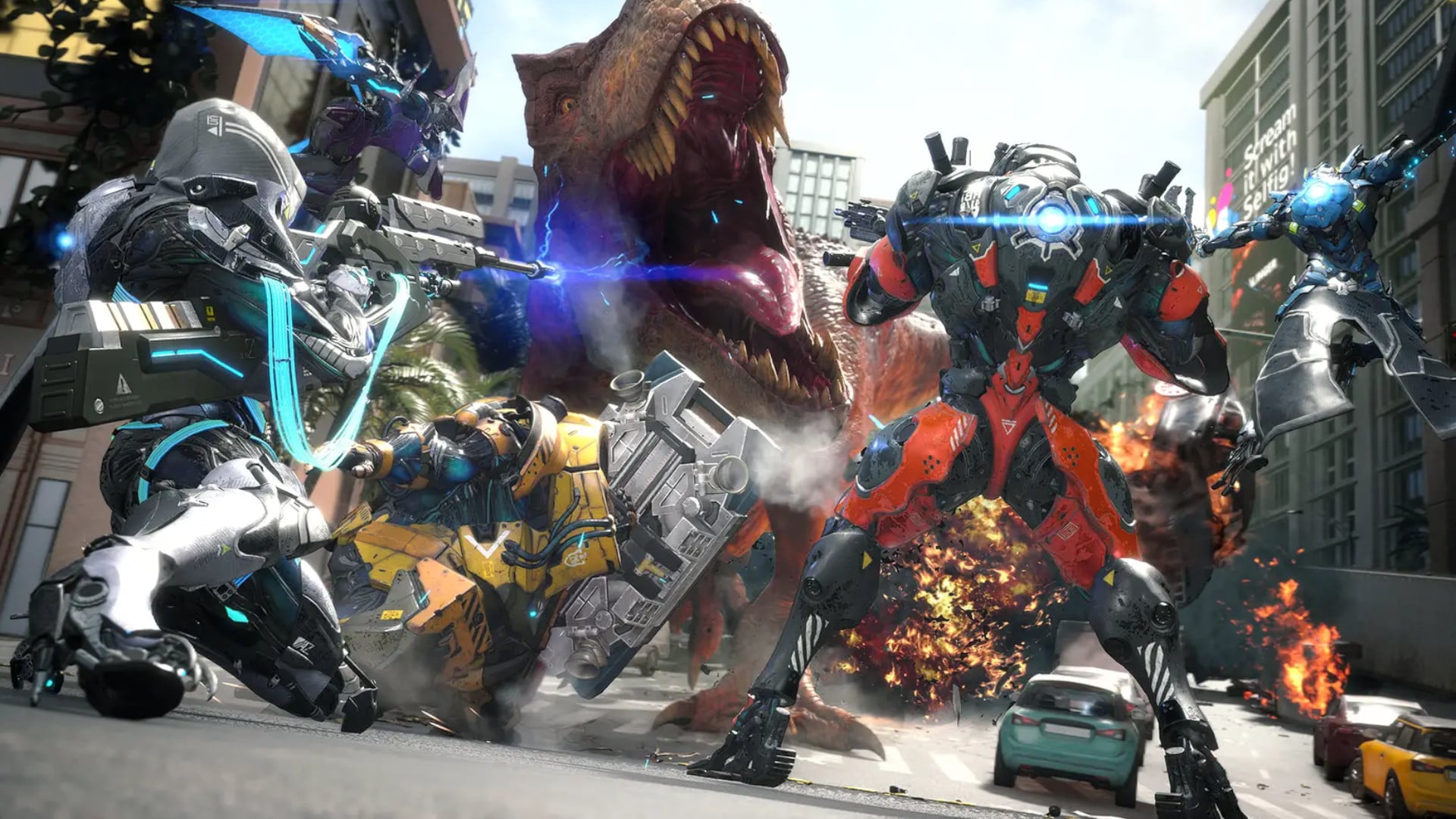 Exoprimal pulls out a mixture of anthem, dinosaurs, portals, explosions and lots of banging in the trailer. Will that work? It certainly looks insane enough to work.

This is what the crazy trailer shows: Where to start An artificial intelligence called “Leviathan” tells us that we have been selected for a live combat test on the island of “Bikitoa” – all for the sake of research. And this island is where it all happens.

Two teams have to face the fight against suddenly appearing dinosaurs. There’s all the hits: sprawling hordes of raptors swarming the screen like insects, a roaring T-Rex, aggressive ankylosaurs and stegosaurs – these are the enemies you’ll have to deal with.

And what is the best remedy against scaly attackers? Sure, modern exo suits that are a bit reminiscent of Anthem. There are also all kinds of weapons, from a rifle to a huge hammer to a protective shield.

In addition, lasers are constantly firing across the screen, something explodes, in between a plane crashes and pterosaurs chase through a tornado.

In brief – take a look for yourself:

At first glance, the trailer itself seems like one of those classic trash films that are just completely over the top, but precisely because of that they are fascinating. Like “Kung Fury” or “Sharknado”.

It is difficult to guess from the trailer whether the new game from the Dino Crisis makers will be really good in terms of gameplay. But hey, it has giant dinosaurs and fierce exo-suits with lasers. That sounds like fun.

What kind of game will Exoprimal be? You can test it

This is supposed to be Exoprimal: The game’s official announcement brings a little more clarity. Story-wise, we’re in the year 2040, and it’s not looking good, because “sudden dinosaur outbreaks have plunged the world into a crisis that threatens humanity’s very existence” (via exoprimal.com).

Dinosaurs that suddenly show up from portals and cause trouble – anyone who knows the old Pro7 series “Primeval – Return of the Primeval Monsters” knows that this is a big problem.

But the AI ​​”Leviathan” can detect the outbreaks beforehand and then sends the “Exofighter” off – i.e. you. You can use the Exo Suits, which are divided into “attack”, “tank” and “support”.

This is how it should play: Dino-Survival is the heart of the game and presents two teams of five with different objectives to solve. The team that finishes first wins. There will be different variants, from “Dinosaur Hunt” (destroy enemies) to “Data Transport” (escort) to Energy Steal (gather energy) and more modes. You can find a closer look at our colleagues from the GameStar in the preview.

There is also the “Neo-T-rex” mode, in which you fight together against a mutated T-Rex. Incidentally, this is not the only special dinosaur: There is also the “Gas Neosaurian” and the “Sniper Neosaurian” with special attacks. Again, that sounds like a coin toss between genius and madness.

How to test: The game itself is scheduled for release in 2023, but there will be a closed network test before then. For that you can currently over the official site Sign in. You can still apply until June 30, 2022.

All three tests take place exclusively via Steam. For the full release, the game will also come to PS5, PS4, Xbox Series X | S and Xbox One.

At least you will be able to get a first impression in the test of what Exoprimal actually is – crazy work or ingenious co-op experience with dinosaurs.