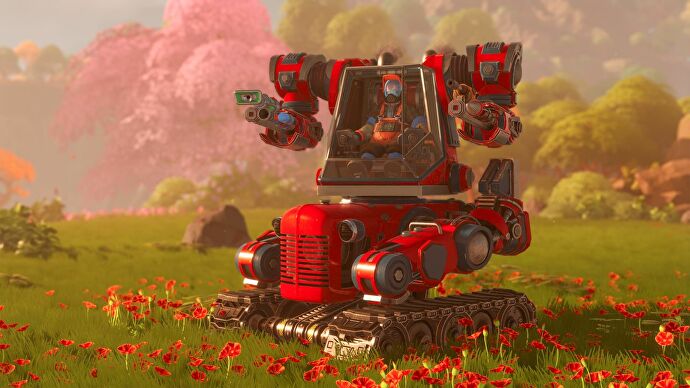 A few days ago I sat in on a presentation for Lightyear Frontier, a 3D farming and crafting game set on a remote planet at the edge of the galaxy. In fact in the presentation the game was referred to as a “farmadventure”, which isn’t a portmanteau and you only have to go another centimetere along to get farmventure, which is just about a portmanteau and, furthermore, is fun to say.

Developers Frame Break are keen to emphasize how chilled out Lightyear Frontier is: it’s very peaceful, and there’s no death (a “survival game without survival”). It’s all about ecology and being one with nature. This does, at times, feel slightly at odds with the other eye-catching thing about Lightyear Frontier, which is a bloody massive tractor mech stomping about everywhere.

“The mech was our starting point for the game,” explains Joakim Hedstrom. “It was the only angle that felt like an interesting take, where we take basically all of the farming equipment of, say, Farming Simulator, and put them into one.” The mech is heavily inspired by a tractor (it looks a lot like a tractor with legs in many of the screenshots) but you can customize it and strap on new tools. It can transform a little – maybe you switch from the stompy legs to caterpillar tracks that let you boost across the terrain a bit more quickly. It’s a “farming power fantasy, if you will.”

Your mech has guns, as well, but nice guns. “Shoot to create,” as Hedstrom says. You can cycle through different tools attached to the arms of your mech which might fire a resource drill into a tree, say, and then scoop up those resources with a sort of hoover. Most pleasingly, you plant crops by literally firing seeds into the ground. Farming in space is pretty high tech; there’s also a friendly AI helping you out, and a tethered drone with a scanning camera you can send up to sweep your immediate area.

See also  AC Valhalla - How To Use & Upgrade The Hugr-Rip in Dawn Of Ragnarok?

The starting area of ​​the planet is a more earthly kind of place, with green grass that is recognisably grass and trees that look like regular trees, but as you move further out from your crashed spaceship you will encounter weirder stuff. You won’t be growing regular corn, that’s for certain; there are regular concerns like different weather types being bad for your plants but Hedstrom says that, for example, you might encounter plants that don’t like water at all and have to be protected from the rain instead of being watered. And Frame Break have spent ages, Hedström says, making sure you’ll be able to properly customize the layout of your farm, and put effort into making it nice – your raised beds go hereyour water silo just there.

Though the comparison games Frame Break cite are things like My Time At Sandrock, Astroneer and Satisfactory, I got a kind of Stardew Valley vibe from the idealised, small homestead living. And despite that call to Satisfactory, the devs have actually tried to stay away from automation. You can’t make a robot do all your farming for you.

That’s the thing that interests me, I think, the clash between high tech and low. The space setting and the big ol’ monster mech and the weird plants and animals are twists, but the core of the formula is more familiar. The key pillars described are the sandbox world, the theoretically endless and infinitely replayable nature of the game, the mysterious story, and the co-op and community part of it – playing with friends. This is all sort of linked by the open exploration: you explore the sandbox world with your pals to keep building and improving your homstead, uncovering the mystery at the same time. Bad-a-bing, bad-a-tractor.

I have to emphasize though, that this was a very short hands off presentation of a pre-recorded bit of edited game footage. This is all stuff I have been told, rather than tried for myself. Still, if you’re into all the farming sim business like I am, Lightyear Frontier is one you might want to start your engines for. It’s coming out next year.