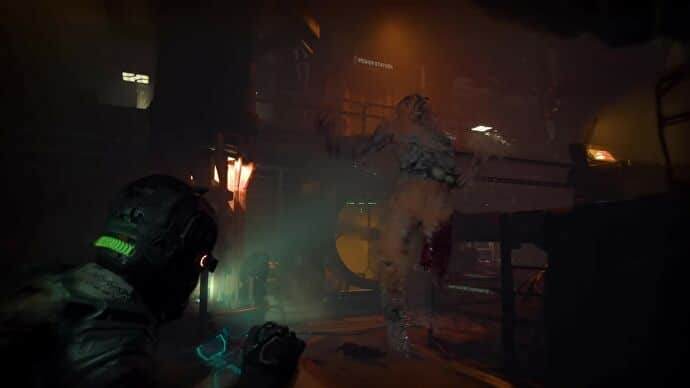 Your boy was in LA for Summer Geoff Fest 2022 and had the opportunity to sit down with Dead Space co-creator Glen Schofield, who’s now director of Striking Distance Studios and their upcoming sci-fi horror fest The Callisto Protocol. We touched on the game’s “beta paths”, its gore system, upgrades, and batteries. There was a lot of chatting about batteries. Forgot to ask if they were AA or AAA, though.

We saw The Callisto Protocol’s first tiny bit of gameplay the other day, which looked quite Dead Space-y, right? A rugged lad, the shooting of monster limbs, the dark tunnels filled with monsters who see your eyeballs as a delicacy. All very Dead Space – Space but Dead. It’s perhaps unsurprising, considering Glen Schofield’s past, but he’s quick to separate the two – although conceding that, yes, if you’re a fan of Dead Space, you’ll probably like The Callisto Protocol.

And let’s not forget Schofield’s post Dead Space movements, either. He co-founded Sledgehammer Games, one of three teams who contribute to the Call Of Duty production line. Those are FPS games focused on big set pieces and explosions, not horror. When I ask what motivated him to get back on the horror bandwagon, it’s clear he’s missed the genre.

“You know, I’ve always loved it. I always loved sci-fi. And then horror came along as well. And, you know, I love movies like Alien, The Thing and Pandorum. And then Horizon and Alien Versus Predator. “There’s not a lot of them, but I liked them all, right? And then of course, you have Prometheus. They just captured my imagination in a way, I was like, ‘I’m being scared in space. I like that. ‘” Schofield was working on the Nazi zombies for 2017’s Call Of Duty: World War II and felt it scratching that itch again. “I knew that was going to be my last Call Of Duty game. So, I’m just going to go back to what I really love.”

“There’s more to the prison than meets the eye… you’ll find a lot of history there.”

Somehow, then, do we have COD zombies to thank for Callisto Protocol? Yes, a little bit. But judging by the snippet of gameplay we’ve seen, these particular space zombies – or biophage, as they’re properly known – look deadlier than COD’s shambling horde. Bulky lads fall through grates, and others take wild swings if they get close. In the extended reveal trailer there’s a big arm that grips you by the throat. When I ask if we can expect anything other than the zombie-like biophage, Schofield remains tightlipped, but does say that we’ve “seen mostly the first ’round’ in the game” and that they get “worse and worse”.

The extended trailer also shows a kind of gravity gun which the player uses to hold and then fling an enemy into a wall that Schofield says is called the Grip. “I’m just looking forward to seeing what players do with it,” he says. “You’ve got stuff around the world you can use; we’ve got spikes on the walls, we’ve got dangerous stuff all over. So, you know, kind of have at it. That may be like, the one sandbox But also, sandbox-y is just like, do I decide to use my melee? Do I decide to use the Grip? Or do I decide to shoot?”

Whatever you choose it’ll probably get messy. Livers slapping against walls. Heads popping like melons. In real life, I’ll scream at the sight of a papercut, but in a game like this, I’m all for a satisfying crunch, and we certainly saw some of that in the trailer too. It’s something Schofield says they’ve put a huge amount of work into. I mean they have on entire team dedicated to it.

“Oh, yeah, yeah, we got a thing called The Gore System, which took a couple of years of just engineers and renderers and lighters and artists,” he says. “You can tear apart the enemies in so many different ways. It’s not just the arms and the legs fall off. It’s half the head, part of the head. Yeah, it’s kind of crazy. We went crazy.”

There are a “bunch of beta paths” or optional routes (though Schofield can’t reveal much he does tell me that “the prison’s just a part of it” and “there’s more to the prison than meets the eye… you’ ll find a lot of history there.”) but it’s “really the enemies” that should inspire creativity. When your back’s against the wall and you’ve got four head-chompers slithering towards you, it’s then that you’re encouraged to use the grip and your environment to mulch enemies. This rings especially true when ammo is a valuable resource, where finding 20 rounds might feel like “you’ve hit the jackpot but… you probably didn’t”.

And it’s not just ammo you’ve got to worry about, it’s your flashlight too. Batteries are scattered around the facility and it’s up to you keep the flashlight topped up, lest you torn apart by enemies that will absolutely take advantage of the darkness. It sounds as if they’re crucial to survive, so it’s all the more surprising that they’re only a recent addition, born from giving the player a tool to better navigate the game’s various lighting systems. “It’s dark, blinking lights, and you’re in all kinds of different lighting patterns. And a flashlight helps. And then we’re like, ‘You know what? Let’s give it a battery’,” Schofield explains. “And so, I think that’s one of those little things that’s really going to make the game nastier. Because we just sort of did that recently, and we’re now only starting to play test it.”

As for other Callisto collectibles, there’s plenty on offer. “There is a currency system. There is a collectible system. There’s things to collect for the score”. And these may feed into making your guns stronger, as Schofield says they’ve made “a very – for a third person [game] – very intricate gun upgrade system” and that you’ll “add all kinds of stuff onto them”. This might be contentious, but I love a skill tree, so that’s a welcome development. I ask Schofield whether he can expand on the upgrades system, to which he responds, “Nothing more than just – we have skill trees.”

So, while there’s a lot that’s being kept under wraps still, I’m very excited to see more of The Callisto Protocol and hopefully get hold of it come December. I’m not fully convinced it’s really that different from Dead Space, but it certainly seems to have its priorities right. The prison seems like a character in itself, with environmental dangers and mysteries. The enemies aren’t only for scares, but inspiration stations for you, your grip, and the many upgrades you’ll wield. My main take away? Don’t run out of batteries.