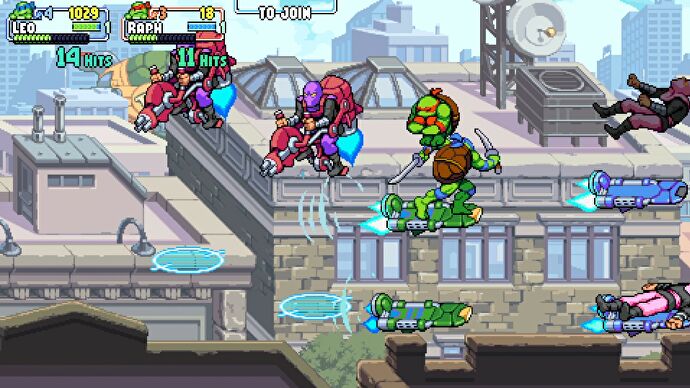 Teenage Mutant Ninja Turtles: Shredder’s Revenge, a sidescrolling beat ’em up that aims to recapture the spirit of the TMNT arcade games from decades past, is both incredibly simple and a breath of fresh air. It’s a basic button-mashing affair that offers nothing new, but that facilitated a good old chinwag that I didn’t know I needed.

It was something I really appreciate, when my go-to multiplayer games, such as Warzone and Destiny 2, demand my constant and unwavering attention. Lasting about three hours, Shredder’s Revenge won’t become your new time sink, but it’s an undemanding arcadey jaunt that you can enjoy while munching on pizza with pals. Or, ya know, over Discord while everyone is surrounded by takeaway tubs in their bedrooms.

As the turtles, Splinter, and April O’Neil rush through the streets, sewers, and skylines of Manhattan to defeat Shredder, you’ll face down a range of classic TMNT baddies, including the Foot Clan, robots, and a few Triceratons. The way you deal with these threats never changes, though. Mash X on your controller to doll out some whacks with your weapon, tap A to jump up for an air attack, or press Y to use your destructive super that usually kills everything. It all feels far more fluid than the arcade games it tries to replicate, making Shredder’s Revenge more joyful to play, but it doesn’t offer anything radical that sets it apart from other sidescrollers.

See also  The time is far from ripe for the remake of Prince of Persia: Sands of Time

That simple array of moves might look different for each character, but they aren’t nuanced enough to make the turtles or their buddies feel unique. Donnie’s stick is a little slower but has longer reach than Michelangelo’s nunchucks, for example, but most baddies are squishy enough that it all feels identical in practice. That means you can effortlessly run through each stage without a care in the world, freeing you up to chat with friends while the turtles destroy everything on-screen. I’m not great at socializing without some external thing that occupies my eyes and hands, and Shredder’s Revenge struck a perfect balance that kept me just busy enough while still letting me talk to vid bud Liam over a short Steam Remote Play session. Both the local and online co-op even allow up to six players to join the fray at once, making it the perfect background entertainment for a group get-together.

When I was playing alone, Shredder’s Revenge was a different experience. I found that it felt more monotonous, with stages quickly blurring together with a lack of distinct features aside from different backdrops – and while the combat in Shredder’s Revenge is pretty simple, the backgrounds on every stage are just very pretty. The vibrant pixel art is the biggest leap from the Konami arcade games, making Shredder’s Revenge look full of life compared to its wooden predecessors. The action might not feel quite as energetic as it looks when the controller is in your hands, but this eye-catching chaos is definitely the best that the arcade turtles have ever looked.

Beyond that are some other attempts at variation. There are a few levels in which the turtles ride their hoverboards, but they just end up feeling identical to any other stage, but with a skyline that whizzes past in the background. One variation on this towards the end of the game does get slightly more interesting, offering about ten seconds of high-speed obstacles that genuinely threw me off and felt challenging, but that was nothing more than a minor deviation. Since the game rarely treads new ground, I didn’t feel motivated to keep playing without a friend along for the ride.

While most of the enemies are easy to bounce around with a combo or two, the bosses that lie at the end of each stage tend to offer more of a challenge. They’re a mixed bunch, however, and don’t necessarily ramp up in difficulty throughout; some of the later bosses are underwhelmingly simple. If you want to make things incredibly easy, you can even walk over to the corner of the screen before pressing RB to use a taunt, which automatically charges your super. If you use this tactic to keep dipping in and out of the fight, using your super to wreak havoc before scurrying to the edges to recharge it, it makes Shredder’s Revenge an absolute cakewalk on every difficulty.

There are three difficult options to pick from, but don’t look at these for a true test. The hardest simply raises the damage dealt by enemies and prevents you from storing multiple super move charges at once, but that doesn’t add much challenge once you’ve mastered the incredibly simple combat system. My slip-ups were more punishing when enemy punches could chip off an extra health point, but I would’ve preferred a few more layers on top of just enemies hitting harder.

Instead, the real challenge comes from the Arcade Mode, which is one of two ways to play in Shredder’s Revenge. Arcade Mode offers the classic experience with three ‘continues’ before you’re forced to restart completely. It also removes the option to save your progress, so you’ll have to complete the whole story in one sitting. On the Gnarly difficulty that can prove particularly tense, and makes for a fun challenge run if you want to clear all of the bosses in succession, even if the individual enemies are still a walk in the park. If Arcade sounds a little too tough, then Story Mode might be for you, as it lets you save and quit to take a break. It also lays the stages out on a little map, so you can backtrack and return to previous levels without needing to restart. Arcade was definitely the option for me, but I imagine Story Mode will be perfect for those who can’t dedicate a few hours all at once.

It makes Teenage Mutant Ninja Turtles: Shredder’s Revenge a fun – albeit short – romp that’s perfect for a night lounging around on the sofa with mates, or in a Discord voice call from your bedrooms. It doesn’t make any big departures from what you might expect, but that simplicity lends itself to a more social gaming experience than I’m used to. I like to imagine it captures the feeling of crowding around the original arcade machine with your pals back in the 80s (even if, as a 00s baby, I’ve never actually done that). That said, Shredder’s Revenge wasn’t so fun alone, so I’d recommend waiting until you manage to get a group together. There’s no rush to play this one, but it’ll be a good couple of hours when you can convince friends to hop in.