Wanley Fendrich – an artist on the water 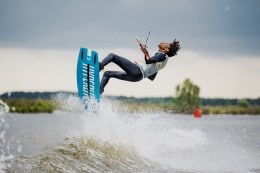 Alabama.
The water temperature of the Maas in the German-Dutch border area is around ten degrees. On a Saturday in April, Wanley Fendrich is sitting in the motorboat with his parents, putting on his wetsuit and jumping into the deep end on his wakeboard.

“At these temperatures, diving is always a real challenge,” says the 17-year-old, “but it’s just part of it.” What Wanley Fendrich then does with his wakeboard on the water has nothing to do with overcoming it, but with impressive body control and pure fun: he lets himself be pulled from the boat onto his wakeboard on a leash. He uses the waves made by the boat as a jump, does somersaults, stands sideways in the air, and when landing, leads the tether behind his back.

On the way to the top

He is so impressive at wakeboarding that Fendrich is on the verge of becoming an international leader. The water artist has already collected five German championship titles and made it into the final of the top six in his age group at the World Championships. “Regardless of all achievements, I love to stand on the wakeboard. For me it’s like a retreat. The feeling of standing on the water and feeling the suction under the board is incomparable. You can’t convey that to anyone who hasn’t done it themselves,” says WestLotto’s top talent, describing his sport.

World Games as the highlight

The high point of Fendrich’s life as a wakeboarder is coming up this summer: The World Games – a major international tournament for non-Olympic sports – in Alabama (USA), where the man from Hünx will compete for the German team. “It’s an absolute dream for me. Participation in the World Games is the maximum that can be achieved in a non-Olympic sport. There I compete against the wakeboarders, who have been my role models for the last ten years,” says Fendrich.

“90 percent of Wanley’s life consists of wakeboarding,” says his mother Sabine: “When he’s not on the board, he’s watching wakeboarding videos, reading about them or editing his own videos.” Wanley’s wakeboarding passion runs through the whole family Fendrich infested. Wanley trains on the board four to five times a week, mother Sabine and father Markus steer the boat. “We support him as best we can, but if he ever lost interest in the sport, then of course we would stop.”

But Wanley isn’t thinking about retiring at all – on the contrary: “At the moment I’m quite good at combining school and sport. And in the long term it would be my big dream to earn my money with the sport – whether as a professional or with my own wakeboard school.” But the training is not only on the Maas in the Netherlands: The high school student spent the Easter holidays in Portugal: At national team training session near Tomar. “We have the best conditions there: very smooth water and little wind. And besides, the water is a little warmer.”

More information about Wanley Fendrich’s passion can be found in the video:

Every tip helps the sport

Whether LOTTO 6aus49, Eurojackpot or scratch cards – as Germany’s largest lottery organizer with a government mandate, WestLotto has stood for safe and reliable gaming since 1955. But WestLotto doesn’t just turn the players into winners! Around 40 percent of the stakes go to the state of North Rhine-Westphalia, which uses it to support non-profit institutions from the fields of welfare, sport, art and culture as well as environmental and monument protection – for example the State Sports Association (LSB), which can use it to implement numerous projects and activities. Over the past decades, 30 billion euros have already flowed into the common good in this way, 690 million euros in 2021 alone. Everyone in NRW will benefit from this! More under www.lotto-prinzip.de.

Participation from 18 years. Gambling can be addictive!