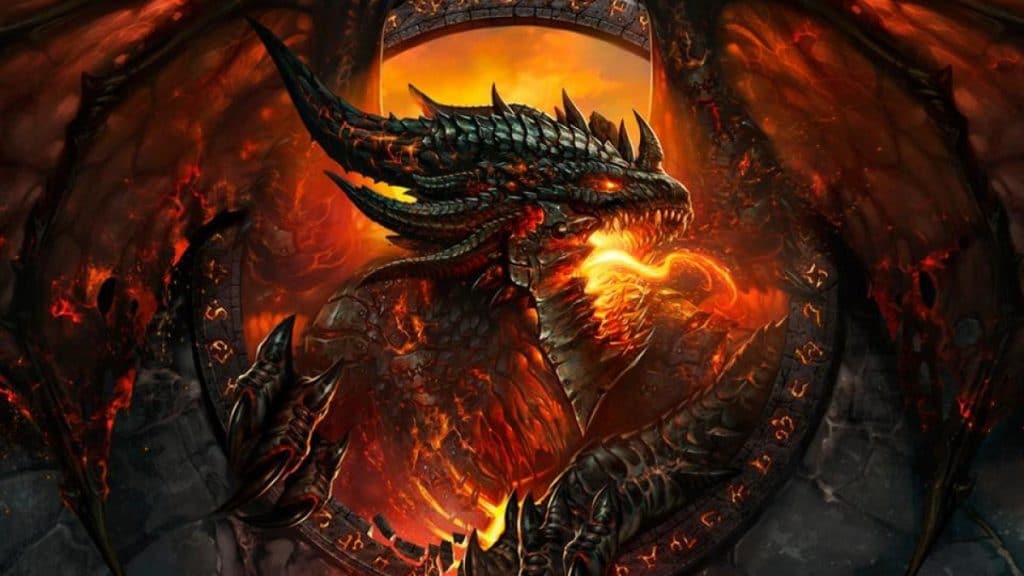 Dragons are among the most popular mythical creatures and are also frequently used in gaming. There is hardly an MMORPG in which there is not a huge and important dragon. We have collected 5 of them for you.

Few other mythical creatures are as widespread and well-known as dragons. In different parts of the world, legends arose about these powerful beings, sometimes friendly to humans, sometimes hostile.

Countless books, films, series and works of art revolve around dragons, and game developers have also used dragon mythology in countless games. Especially in MMORPGs there are often a large number of different dragons. Here are 5 of them that we think are really cool.

This is Deathwing: Deathwing is one of the most well-known dragons in MMORPGs and originally wasn’t actually evil. His real name was Neltharion and he was the leader of the black dragonflight and an earth guardian.

He was considered wise and just, but over time Neltharion began to hear voices. The old gods whispered to him that other dragons were plotting to destroy him and his swarm, driving him insane. The old gods instilled a tremendous hatred in him for other dragons, and he began making plans to subdue them.

In a mighty battle, he was defeated by the other Dragon Aspects who turned against him together. Deathwing then had to flee and hid in Deepholm, where he remained for the next few years.

In the addon WoW: Cataclysm he finally returns and is stronger than ever. His arrival tears the world apart and destroys large parts of the country. In two massive raid battles, he is finally defeated by the players with the help of the Dragon Soul.

This is Midgrardsormr: Although he may not look like it, Midgardsormr is actually an alien. Many thousands of years ago, he fled his home planet, which was devastated by war, taking 7 eggs with him.

After a long journey through space, he reached the planet Etheirys, whose goddess Hydaelyn offered him sanctuary. The dragon settled on the planet and soon his 7 children, the first brood, hatched from the eggs. They multiplied and settled the various continents, their wisdom valued and their power feared.

But the peaceful times soon came to an end. His children became involved in Ascian machinations, some of them lost their lives as a result. Midgardsormr himself ended up leading the Dravanian Horde against the “invincible” fleet of the Garlean Empire in the Battle of Mor Dhona.

He and his dragons destroyed countless ships and the flagship Agrius. The explosion was so powerful that it destroyed the entire region and sent the Father of Dragons into a sleep that lasted 20 years.

Players could face off against Midgardsormr multiple times in FFXIV. Against his spirit in the Dungeon Guardian of the Lake and against his young and powerful form in the raid against Omega.

This is Nagafen: The red dragon has long been one of the oldest and most powerful dragons in all of Norrath. He led the armies of the Ring of Scales to victory against the elves’ Tarkish Empire. Many didn’t even dare to say his name out loud.

Nagafen and the rumors that circulated about him were only discussed in whispers. He was banished and no longer part of the Ring of Scales. Only the dragon himself and the ring’s oldest leaders know the exact reason for the banishment, but it is said that he broke one of the greatest laws of dragons.

See also  The next League Of Legends champion is Bel'Veth, The Void Empress

After the banishment, he had the Fire Goblins build a home for him in the fiery depths of the Lavastorm Mountains, where he has been ever since. He made a pact with the king of the goblins, who have served him faithfully ever since.

For many years, the inhabitants of the city of Qeynos had to bring him a young girl as a sacrifice every year until a priestess of the love goddess Erollisi cast a spell to make the dragon fall in love with her.

Lord Nagafen is one of EverQuest’s original raid bosses along with 3 other enemies.

This is Aurene: The female dragon Aurene is a close ally of the player character in Guild Wars 2. Players protect her from the minions of the dragon Primordus when she is a tiny hatchling and form a telepathic bond with Aurene.

She is the granddaughter of the great and fearsome dragon Kralkatorrik, who eats the magic of Tyria and corrupts living beings with his breath. However, Aurene opposes her grandfather and supports the players in the fight against him by fighting against his henchmen in the battles.

During a battle against Kralkatorrik, she helps trap the great dragon and reveal its weaknesses. However, the dragon proves too powerful and Aurene seemingly sacrifices her life to save the player character and is impaled by Kralkatorrik’s crystals.

However, removing the crystals from her body revives her, and together with the players, she resumes her grandfather’s pursuit. In the final battle against the Incarnation of Pain Within, Kralkatorrik is defeated, Aurene absorbs the magic of all 6 Ancient Dragons and becomes one herself.

This is Kaalgrontiid: The giant ancient dragon is the main antagonist in the large chapter ESO: Elsweyr and the following zone DLC Dragonhold. Referred to as the Lord of Wrath and Terror, he was long imprisoned in the Halls of Colossus.

Free again after many years, he went straight to work to achieve his ultimate goal. Kaalgrontiid wanted to become as powerful as the dragon god of time and ruler of dragons, Akatosh.

So he headed to Elsweyr to absorb the power of Jode’s Core, a powerful lunar artifact. By doing so, he wanted to become the third moon and hoped it would make him as powerful as Akatosh.

However, according to an ancient prophecy, the creation of the third moon would bring about a time of darkness and the birth of a new super being, and it would destroy time itself. But in the end, the dragon is defeated by the combined forces of Nahfahlaar, Dragonguard and Queen Khamira.

Which dragons from MMORPGs do you think are really cool? Write them to us in the comments and we will add them to the article in the future.