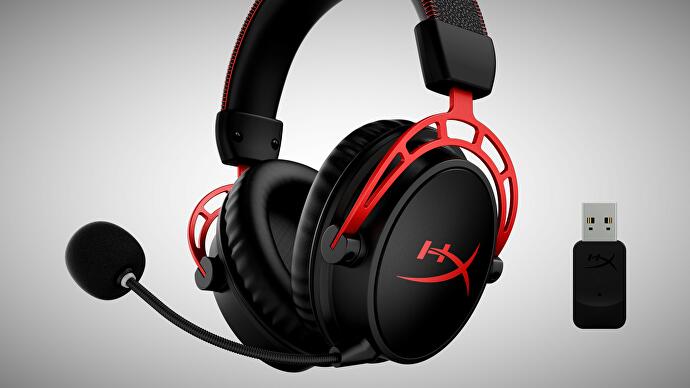 You know that feeling when you have wireless headphones and you have to charge them every few days? It’s not the end of the world being cable-bound and having to take the headset off for each gear, but it’s annoying and not the reason we’re spending more money for a wireless experience.

The HyperX Cloud Alpha Wireless wants to counteract this problem. I was able to test the headset with the incredible battery life of up to 300 hours and I am absolutely thrilled with the battery life. Despite several gaming sessions and a few hours of work that the headset has accompanied me over the past few weeks, I have not had to charge it once – it has not even become empty!

When will this Alpha battery run out?

In the three weeks that have now passed, I’ve only used it occasionally every day – if it’s quiet for too long, the headset switches off automatically anyway – and found that the battery level hasn’t changed. After unpacking it was 90 percent and stayed that way for many days. At the time the test was published, I made it to at least 50 percent. Crazy. In a good way.

Battery life is by far the most interesting feature about this headset and can be a good selling point on its own. After all, the battery can withstand 300 hours of continuous sound – even if this breathtaking value was only achieved with half the volume and “Hotel California” from the Eagles on a continuous loop. As great as the long-lasting freedom without a cable is, there are a few small drawbacks with this endurance pro.

If you then have to charge the wireless headset, the supplied cable is incredibly short at 50 centimeters. That wouldn’t even be enough for use on a laptop unless you want to crouch over the keyboard like Gollum. According to the manufacturer, the charging time is 4.5 hours. I haven’t been able to try it out yet, because this thing just can’t be emptied!

The microphone’s pop protection is also a bit stubborn, as it only fits over the rather thick microphone with a mixture of skill and a certain amount of effort. It’s like trying to stick a grape up your nostril. After all, the part is so extremely tight. Apart from the detachable microphone and the headset itself, there is not much left in the box.

Having owned the HyperX Cloud Alpha a few years ago, the design of the headset felt immediately familiar. Visually, it’s nearly identical, but stands out with a fancier microphone and smaller, better finished buttons and wheels on the earcups. With these you can control the volume, switch on the headphones or mute yourself – the classics. You can use the Alpha headset on the PC or on the PlayStation.

At 335 grams, the headphones are neither particularly heavy nor particularly light and sit firmly and comfortably on the head. Only at the beginning did it feel uncomfortable from time to time. The padded temples are quite comfortable, although I generally prefer a strapped solution as they are just inherently less pinching. The oval ear cups with imitation leather covering passively shield outside noise quite well, which I always notice when I speak much louder than usual.

The USB headset also scores with a good sound in the generous frequency range from 15 to 21000 Hz and up to 103 dB at an impressive 62 ohms. Where I miss the bass a bit with some headsets, it is much more potent with the HyperX Cloud Alpha Wireless. One song where the vocal lows can really show what they’re made of is “Radioactive” by the Imagine Dragons.

The lows in this song quickly sound like mush if the hardware can’t clearly reproduce the rippling bass in its individual elements. But the HyperX Cloud Alpha Wireless also knows how to deal with this tonally complex component. Dull thrashing bass, as we know it from the rap or techno genre, is therefore absolutely no problem.

Even at high volume, the headset still reproduces the instruments and voices clearly and cleanly, the bass tickles the ears. Only the heights start to sting the listeners a bit with the controls turned up all the way. This is particularly noticeable with hard “S” or “T” sounds, for example in Linkin Park’s “Numb”. However, this should only bother people who do not otherwise attach much importance to the health of their eardrums.

Spatially, my ear recognizes slight directional differences in the instruments when listening to music. This is particularly evident with the drums. I hear one drum further to the right, the hi-hat further to the left. This makes the sound image more dynamic and lively. Sure, for more money it can be even better, but the HperX headset cuts a fine figure in its price range. By comparison, the then $150 Corsair HS80 Wireless I reviewed a while ago sounded pretty muddy. And what about gaming?

No matter from which corner an opponent in Valorant or Overwatch 2 sneaks up, the headphones reproduce the position fairly accurately and at a reasonable volume – the DTS Headphone:X Spatial Audio takes care of that. If you are still not satisfied with your sound, you can try out a few presets in the equalizer in the NGENUITY software.

However, I doubt the 20 meter range that HyperX attributes to its wireless headset. During my test, the headphones already cut the connection to the dongle when I wanted to go to the toilet next door – less than three meters as the crow flies. The loud male voice in the headset is also annoying, always yelling “DISCONNECTED” in my ear when I’m out of range. The same applies to switching on and off, which is also followed by the battery status. There is no separate display for this on the headphones.

I was less convinced of the microphone. Visually and practically I have absolutely nothing to complain about. It is comfortable to bend into the right position and even detach. In terms of sound, it doesn’t play at the level that I expect from a headset in this price range. With its noisy and dull sound output, it is at best in the middle field and likes to swallow one or the other syllable – at least with my rather quiet voice. It’s just enough for communication in the game. It is not recommended for recordings of any kind.

The RRP of 229.99 euros is a bit high, but fortunately the headset is already available at many outlets for 179.99 euros – such as at Amazon or media market.

My verdict on the HyperX Cloud Alpha Wireless

I love not having to worry about the headset battery draining with the HyperX Cloud Alpha Wireless. If I had to extrapolate, it would probably be a week or two before I actually have to dig in my cable box for a longer USB-C cable. The sound is great for music, movies, and gaming, although I still get a little startled when my headset loudly tells me it’s now turning off due to inactivity. So you shouldn’t fall asleep in front of the PC if you don’t want to fall off your chair in shock.

You can tell that HyperX has put a lot of focus on the battery and the sound with this headset. This is where the headset really delivers. Significant savings were made in other areas, such as the microphone or the charging cable. The microphone in particular is so weak that it could be a KO criterion for many players. That shouldn’t happen with a headset in this price range. If you can do without a (good) microphone, you can think of the recommendation.