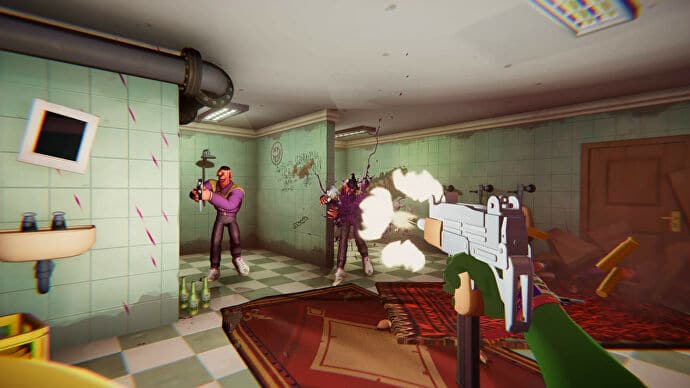 Listen, there’s no reason to beat around the bush with this one. Anger Foot is amazing. It was amazing when I played its early build last year, and its Steam Next Fest demo is even somehow better. How could it not be! Have you seen it? Anger Foot is a game about kicking doors at muppet men. That’s it. That’s the pitch. It rules.

OK fine, I guess I’ll elaborate. I suppose that’s my job. Right so, remember Hotline Miami? Anger Foot is a first-person Hotline Miami. I doubt even developer Free Lives would find that comparison too reductive, to be honest. The two are so structurally similar it would be a bit pointless to deny that Anger Foot cribs a lot from Dennaton’s work. You begin each level unarmed but dangerously legged. Tapping E springs your weird green gams out in front of you, smashing open any doors or kitchen cupboards that are unfortunate enough to be in range. Your kick is your primary weapon and oh reader, what a kick this is. It’s immediate. Powerful. Capable of crunching the bones of any goons that dare to stand in your way. More games such have big kicks, although saying that maybe they shouldn’t, because I think Anger Foot may have the best one.

Your goal in each level is to reach the exit, situated at the end of a series of claustrophobic corridors and wide-open rooms filled with exploding barrels and other destructible items. Along the way are a couple of dozen colorful bad guys. alligators Dudes with human hands for a head. Poochie from the Simpsons. Each enemy variation holds a specific weapon, and kicking them into a wall will let you grab it, Hotline Miami style. Guns only hold a couple of bullets, and once empty can be thrown to stun baddies for a few seconds. Bad guys are as much a resource as they are an obstacle; sure, they can scupper your current progress in two or three hits (mercifully, restarts are immediate) but they also hold the weapons you so desperately need to survive.

This little moment-to-moment calculation is where Anger Foot is at its most Hotline Miami-y. Who do I kill first? The hand-headed lad with the shotgun? The dog-man with the uzi? Maybe I just kick a barrel instead, obliterating them all as soon as I enter the room. Forcing the player to make on-the-fly decisions is what made Hotline Miami so thrilling, so I’m happy to see another game take a punt at it. It’s fun, and works brilliantly in first person, too. The action feels much more oppressive and tense, with enemies hiding behind corners and doors ready to take you out. I guess that’s why you can take a few more hits than Miami Man? Smart. This game is smart.

But only to a point! It’s also super dumb, and that’s where the magic lies for me. It has this really compelling art style that looks like it belongs on the underside of a skateboard. Goofy and gross, but bursting with colour. It takes the edge off the extreme violence a bit, which is a welcome relief, whereas the soundtrack sort of does the opposite. A thumping techno rhythm pounds in your ears constantly as you move through corridors, but the second you see an enemy it roars into life. As the violence erupts you’re treated to an electrifying blast of cracking tunes, but the second the last body in the room falls it vanishes, leaving only the dun dun dun of the ever-present rhythm that pushes you towards your next fix.

yes I think it’s safe to say I like Anger Foot so far. I think it’s great, actually. The ten-level demo is a good way to get a taste of what’s to come and it ends with a boss fight against a helicopter that you have to kick to bits. Have you ever kicked a helicopter to bits before? Of course, you haven’t. Go and play Anger Foot and change that about yourself. You won’t regret it.

See also  Players are hailing Rainbow Six: Extraction for not being as broken as other shooters