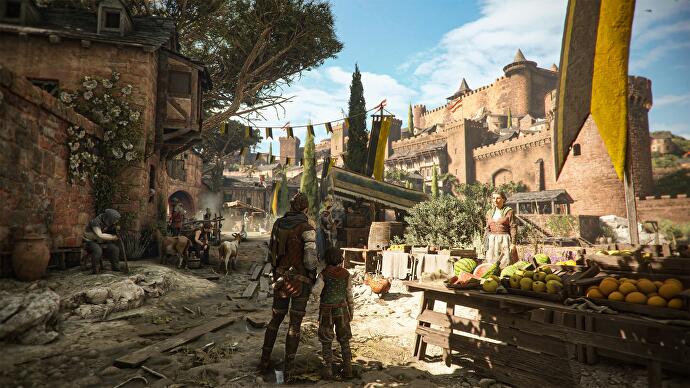 Basically, A Plague Tale: Requiem puts me in a difficult situation: I liked the first part – Innocence – primarily despite and not because of its simple stealth. Everything in Asobo’s debut in the series that went beyond a slim and dramaturgically excellent narrative game seemed to me very limited and mechanical in a way that didn’t really fit in with the rest of the emotional adventure for me. The fact that Requiem now wants to be even more action-adventure with a sneak focus makes me cautious at first.

Then again it is clear that Asobo is doing some work to integrate the once rather rudimentary and transparent mechanisms into the gameplay in a more organic, fluid and simply entertaining way. They’re now an integral component, rather than just systemic video game breaks between the actual game, a gritty adventure. At least that’s how it felt in the chapter that I was able to play in a remote session in the stream.

In fact, this has gotten some Last-of-Us vibes as I try to leave a locked-down town with Lucas to get nightshade to rescue from the herbman just outside the walls. Again, this is heavily resource-dependent stealth, using combustible projectiles to ignite braziers and torches to drive away the ravenous swarms of rats. Or douse them with slingshot sacks of saltpeter so that the multi-toothed blob of writhing miniature bodies pounces on a screaming guard.

New is the tar, which you can also ignite – preferably when a guard is standing in the puddle – or with which you can temporarily increase the glow radius of fire sources. Recently, you can also combine all the alchemical effects with all of your tools, such as pots, to place your own light sources. Meanwhile, you can also use the new crossbow to crack through the helmets of armored enemies. You can even “consume” daggers to kill an attacker who is about to swing. Is that familiar to you? The counter mechanic returns, while instant deaths are no longer part of the game. After the first hit, Amicia is only hit badly and has to recover first, which is implemented quite intensively in audiovisual terms.

In the passage I played, the first half was all about directing the swarms of rats while taking in a ghastly picture of medieval life all around. It’s the sort of environment puzzle where you maneuver a cart of saltpetre next to a torch to put it out so the rats can get to a pig carcass and no longer block access to the ladder.

At this point, perhaps the footnote that I was a bit stuck here because I didn’t understand the car controls. You can only push it forwards and backwards with the stick, but not steer it. I thought for a while that the occupancy might have been shot up, until I realized that Amicia was steering the car in the direction I was looking. Once I figured that out, things went well. But I didn’t intuitively think of it and I hope that I’m either an isolated case or that the game might explain it earlier.

When I left the city walls behind me, it went into a classic stealth sequence: crouch in the tall grass and watch the trio of guards’ paths – or just see if you have enough resources in your pocket to take out all three. It’s still early to tell, but it’s pretty obvious how most problems can be solved and that the path involves a well-stocked resource bag rather than cleverness. Instead, you have to thoroughly search the game environment for ingredients, which again seems quite mechanical to me. But it’s quite possible that it won’t look that way in the final game.

I even had to go back to the last reset point at one point or two because I ran out of ingredients and couldn’t light a brazier to help Lucas get to me. That wasn’t optimal for the flow of the game either, although of course it was my fault somewhere.

But otherwise: Yes, the extension of the sneak mechanics to a kind of “Last of Us in the Middle Ages”, albeit with less direct battles, could definitely work. I wanted to continue to experience Hugo’s and Amicia’s story right from the end of the last part, and the fact that the big sister obviously has to cope with the violence and mischief is a refreshing facet. Done right, it could add more tragedy, profile, and ultimately credibility to the game. Admittedly, I’m a bit concerned that the focus on more and more involving stealth elements detracts from the team’s real strength, storytelling. But what I saw was fun, which is why I think A Plague Tale: Requiem, with its elaborate production and sophisticated technology, has what it takes to become one of the defining action-adventures of the year.