Release: When is Hogwarts Legacy coming out? Confusion about release date Updated June 16, 2022: When will “Hogwarts Legacy” be released? There are more and more indications pointing to a release in 2022. Officially there is still talk of a release in winter 2022.

“Hogwarts Legacy will be released in Winter 2022,” it says on the official website.

At the end of Xbox & Bethesda Showcase as part of the Summer Game Fest 2022 the following picture was shown. All games of the two publishers/developers that will be released in 2022 and 2023 can be seen on it. It is easy to see that “Hogwarts Legacy” is at the end of the list of titles that will be released in 2022. Another indication that speaks for a release at the end of 2022. A postponement is always possible in principle, but we do not expect it in this case.

Updated January 9, 2022: A Christmas greeting via Twitter with the content that one is looking forward to the coming year [2022] more news too Hogwarts legacy to share is the latest official statement from the developer studio Avalanche softwarewhich will accompany the upcoming role-playing game in the Harry Potter universe has been published.

He can’t wait to find out more in September 2022, jokes a Twitter user, playing on the radio silence on the part of developers and WB Games since Release postponement announcement reigns.

AccountNGT however, fuels hope that a release date, “closer [sei] than expected”. 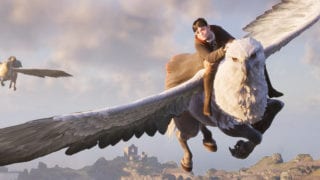 Hogwarts Legacy: Our 10 Wishes for the Magical Roleplaying Game

Signs of an imminent release of Hogwarts Legacy

Already in advance of Game Awards 2021 There was wild speculation about news and a new trailer for Hogwarts Legacy, which was to be shown for the first time during the awards ceremony. However, this has not come true.

The Twitter user and alleged leaker AccountNGT, who has already received a Multiplayer mode for Hogwarts Legacy has reported points with a job application for one Localization Producer pointed out that Avalanche Software should therefore be in one of the last development phases.

updates: The tweet has since been deleted by AccountNGT.

The justification is that work like this Voiceover, lyrics and the localizationi.e. the adjustments to linguistic and cultural circumstances, could only be tackled when the game almost done be. About this he writes:

“Support from Sumo Digital Studios really helped me with my exploration. I have a date from another insider and hopefully it stays that way, reckons [Hogwarts Legacy] sooner than expected.”

In a recently published Q&A, AccountNGT answered the question when official news about “Hogwarts Legacy” can be expected with a terse answer: “Early this year” and affirmed the question of whether it was safe to release in the third quarter of 2022 to be able to expect.

It is also interesting to assume that the multiplayer mode is mini gamesfor example in the form of quidditchwill act, these one is about the highest place in rankings can measure.

Which consoles is Hogwarts Legacy coming to?

The open world game is intended for PC, PS4, PS5, Xbox One and Xbox Series X/S and to all appearances at the earliest after the theatrical release of Fantastic Beasts 3: Dumbledore’s Secrets at the April 15, 2022 appear.

How much should Hogwarts Legacy cost?

Hogwarts Legacy is not yet available for pre-order. Nevertheless, players are wondering how expensive the title will be. In the USA and Great Britain, unlike in Germany, there are already initial reports on the price. This is how the game will be at BestBuy for PS5 and Xbox Series X/S probably $70 costs. For PS4 and Xbox One, on the other hand, you probably have to pay 10 dollars less. In Great Britain there is talk of 69.99 or 59.99 British pounds. Also, it seems that there will be no free upgrade for PS4 and Xbox One.