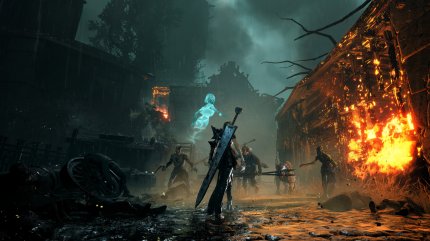 Hack & Slay, Character Action Game, Spectacle Fighter: The genre that was founded by Devil May Cry and is currently being continued by Capcom and Platinum Games has many names. While you could hardly save yourself from top-class Schnetzelspiele in the seventh generation of consoles, the genre has been eking out a shadowy existence for years. If God of War is becoming a narrative action-adventure, Bayonetta 3 is still a long way off, and the next DMC hasn’t even been announced yet, what’s the point of patting your fingers sore?

The answer comes from Reply Game Studios. With Soulstice (buy now €49.99) the Italians have a hack & slay in the making that should appeal to fans of the cultivated carnage immediately. There’s over-the-top action, fast-paced boss fights, and a combat system that promises plenty of depth while remaining highly accessible. We were able to fight our way through an early chapter of the game and report on our impressions of Soulstice.

A sword and a soul


In certain locations, we can use hologram-like spirits to see what was happening in the kingdom before the cataclysm.

The greatest special feature of Soulstice results from the story premise: We play a Chimera, i.e. a fusion of two souls. While we control the spiked knight Briar directly, our magically gifted sister Lute sits in ghost form on our shoulder. The two explore a ruined kingdom in which countless dimensional rifts have opened and try to repel the invading hordes of monsters.

With the simple premise, the developers not only want to provide a reason for the carnage, but also to tell a coming-of-age story that is primarily intended to illuminate the relationship between the two sisters. To this end, Soulstice has a prominent voice actress on board: Stefanie Joosten, known as Quiet from Metal Gear Solid 5, sets both the fragile Lute and the hardened Briar to music.

How much story awaits us in the finished game and whether it lives up to the promises of the developers can’t be said after the short preview session, but overall the team is pursuing a commendable approach for this genre: Soulstice puts gameplay first place – and you can feel it! 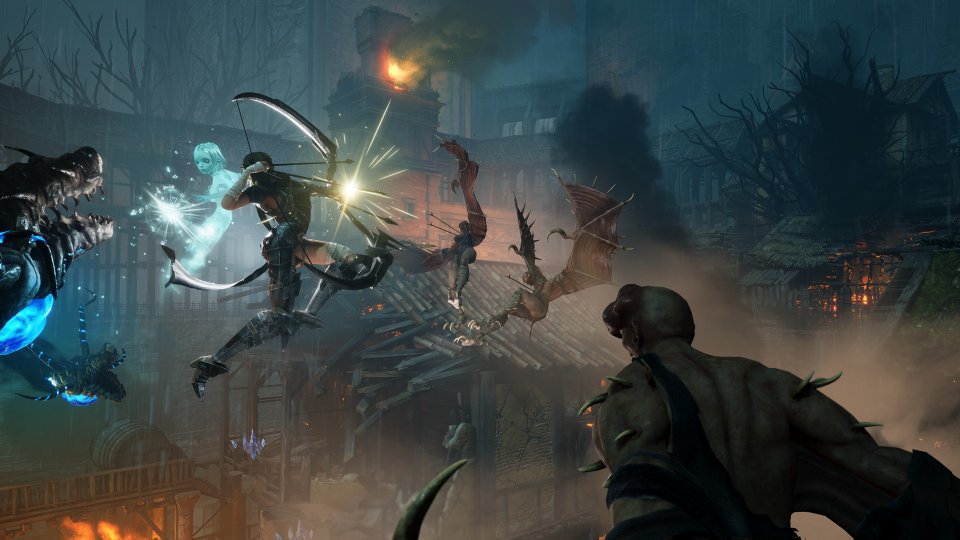 Weapons can be changed smoothly and during the combo, there should be a total of seven. Among them apparently also a bow.

The hack & slay is controlled directly and smoothly, the attacks have a lot of power, the hit feedback is juicy. Like the black knight Guts in his best days, we process hordes of monsters into raw goulash with our giant sword.

In the chapter we played, we were also allowed to turn the blade into a heavy hammer or use a nimble whip, both of which can be conveniently placed on a second face button and also switched using the control pad during a combo. There should be a total of seven different weapons in the game.

While the facial animations are very static, the effects, environments, and general style are quite respectable.

While we as Briar do the rough stuff, Sister Lute supports us with AI-controlled ranged attacks, intercepts projectiles and freezes enemies mid-attack. For the defensive maneuvers we have to actively press a button, which the game announces to us via an overlay – very useful in the chaotic mass battles. Also, we don’t have to stop to block damage, which adds noticeable speed to the fights.

Soulstice increases complexity with a mechanic that causes Lute to create red or blue force fields in which opponents or crystals of the same color then become vulnerable. A synergy system is also used in battle, which allows us to use a powerful finisher for flawless attack series, and after each major battle our performance is rated with medals.