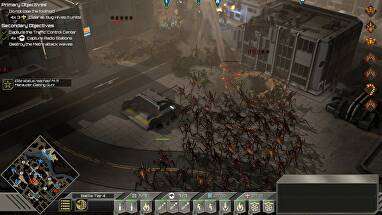 Starship Troopers: Terran Command review
A solid, slightly chaotic RTS that nails some satisfying tactical stand up bugfights, but could use a little more bite

My biggest question about Starship Troopers Colon Terran Command was what tone it would strike. The RTS potential for an interplanetary ground war against overwhelming swarms of giant not-insects is obvious enough. But the dual spirit of most Paul Verhoeven films is a major reason that The Extraordinary Lust Of Dizzy (working title: Starship Troopers) still holds up 25 years on.

Terran Command understands that. Certainly it nods to the satire here and there, but mostly it focuses on the shooting and desperate defenses and evacuations instead. This was the right decision. Though it’s a little short on narrative flavor, unless you’re really into exploring the setting, it’s got enough tactical heft to make up for it.

You play as the commander of the Mobile Infantry, the original space marines, as they fight a big ol’ horde of Arachnids on the desert mining planet Kwalasha. Both are based mostly on the films’ interpretation (mostly the first and third, probably because the second was awful), so the bugs are armed only with raw biology, and your forces mostly comprised of hapless mooks with personal firearms and little chance of surviving a close encounter. The sheer incompetence is gone, however, which makes sense in a strategy game where it’d just be frustrating. You do tend to be under-supplied, though.

See also  Ominous line on the iPhone lock screen: That's behind it

In classic RTS fashion, you start out with basic squads of riflemen and are given access to more unit types every other mission, sometimes with a level that showcases a particular type. Notably, fast and flexible power armor squads, who are very strong even after a big downgrade from the novel. More alien threats are similarly added over time, although interestingly several bug castes swap in and out level by level rather than accumulating.

Terran Command’s missions aren’t puzzles with one expected solution, but your choice of units is largely driven by what types of Bug are spotted in the area. The fragile long-ranged Spitters are best taken out with snipers. Heavily armored Scorpions can wipe out squads at range unless you bring several rocketmen or use the terrain to banzai charge a squadron of pulse troopers at them. But almost every unit contributes something, and the humble riflemen never go out of fashion as combined meat shields and a source of low but constant damage. The “upgraded” Mark II squads complement rather than outmode them, and both benefit from engineers suppressing a lane with flamethrowers.

That’s really the core of the strategy. It’s all about choosing the right forces and positioning them. Most units block each other’s lines of fire, so simply blobbing everyone together will prevent most of them from firing, and you really need that massed firepower. I really like that (with the exception of royal guards and a few other super toughies) the bugs don’t have health bars, so it really feels like you’re just spraying bullets at them until either you wear them down or someone gets a lucky hit. It’s there that it feels most like the film, except minus everyone panicking and getting slaughtered because this is set after the Klendathu shambles. You’re facing vast waves of hardy monsters. Instead of sensibly, mechanically focus firing on one target at a time to efficiently play the damage-output game, your dudes put out a wall of loosely-aimed bullets that puff up sand and dust and sometimes internal alien gack. You can’t ask them for much more than that, really.

It’s your job to use that. Hold what you’ve got, like. So you want kill zones, overlapping fields of fire, clear lines of sight, someone watching the flank, and room for the specialists to take out the big threats. But of course you can’t win a war of attrition, so even on defensive missions, you’ll usually be pushing out to destroy nests. Move forces close to these and the Bugs will spill out into defence. They have the numbers, but you can overpower them locally until a nest is exhausted, then send a squad in to wipe it out. This actually needs a little tweaking, as there’s a window in between you ordering someone into a weakened nest and them actually finishing the relevant animation where it can suddenly replenish itself and massacre your team.

But, much as it enraged me on that one level, that’s actually a symptom of what great single player RTSses often do. I hit several walls and at one point even said aloud “this is impossible! How the hell… with TWO squads?” and then something like “where’s my air support” or “why the hell can’t they give us some rockets?” before figuring out a way that worked. That kind of temporary fury can go too far, but in Terran Command it never lasted long enough to outweigh the satisfaction of fighting through it.

It does have some other problems, though. Overall I’ve definitely enjoyed this one, and in an odd way I appreciate it even more with a little hindsight. It’s been a while since I’ve wanted to keep playing an RTS campaign all the way to the end without flagging. I even bumped the difficulty up here and there (you can do so freely at the start or restart of any mission). All this does is change the rate of damage you do, which is a bit simple, but making the bugs more resilient to bullets kinda suits the setting. I did, however, bump it back down again at other times, because it can also just make things more laborious.

You don’t, see, train units in the Command and/or Conquer style. You exchange supplies (and sometimes War Support, which is used for turrets and late game mechs and power suits, and to determine which unit types you’ll unlock) for units, which are dropped off in landing craft at your bases. As individual troopers in a squad die off it generally gets weaker and does less damage. But if it dies out entirely, you’re refunded the resources in full. It’s more about capacity than expenditure, to the point where you can reinforce any unit infinitely, without a cost beyond occupying a dropship and taking that unit away from the fight. All this means that you do actually tend to grind through localized fights of attrition, and that such fights can tip over from a massacre one way to a massacre the other on a knife edge.

In principle, this means that logistics and managing your reinforcements is the difference, and often that’s true. But even so, an offensive that gets all the way up to a nest and then gets wiped out just means doing it all over again. This is exacerbated by the line of fire system I mentioned earlier, and the absence of any formation system. When you move units en masse, they do create a formation, but you have no influence over it (and it puts the engineers up front, blocking the pulse rifles! Argh!), and they don’t keep any coherent shape while moving. So you have to micromanage everyone’s movements, and manually instruct the rocketmen to hit the armored thing before it wipes everyone out, and then individually set off everyone’s special abilities.

These, incidentally, are kinda neat. Each unit has a special ability – riflemen throw a grenade (which annoyingly stops them from firing for several seconds, limiting its use), snipers have a crippling shot, that kind of thing. Any unit that lives long enough to kill lots of bugs gets one upgrade. Some are uselessly niche, but the riflemen get a devastating shotgun barrage and engineers get a blue-hot laser flamethrowing attack. This is why it’s worth reinforcing, rather than just letting everyone die and throwing fresh units in.

But it’s another thing you have to tell them to do, in the heat of an already frantic battle. They’ll die to the last man rather than use their shotguns unprompted, and selecting the buggers can be tricky, especially as there are only ten ctrl+ command groups. Nobody has the sense to move out of the way of incoming aerial attacks either, so in levels with plasma Bugs you have to frequently path everyone around those as well. The scorpions in particular are devastating thanks to a combination of range, armour, and high damage, and your rocketmen can’t be given standing orders to shoot only at big targets. Added to this is an inadequate alerts system that tells you when someone briefly brushed against a control point but not when three of the squads you left defending a backwater base just died.

Oh. It’s an RTS though, right? This isn’t enough to fundamentally undermine the game, and indeed some players might relish it. Troopers generally do a good job of managing targets – leave enough riflemen in a good position and they’ll mow down endless waves of warriors and flying hoppers at once, so it’s really the specialists that could use a few tweaks. And perhaps having the AI ​​automatically avoid incoming missiles would effectively remove them from the game. But Terran Command needs a little more. A few more options. A few more specific alerts. The ability to queue dropship orders for when one’s available. More… more Verhoeven, ideally.

There’s a neat mission where you’re tasked with capturing a prisoner who’s actually the leader of a mining union, and then deliver him to a tv studio in time for his execution. That nod to a subplot from the third film, plus another to the original that I won’t spoil, are nice touches. But it doesn’t really go anywhere, and despite what I opened with, commitment to that bit is maybe what I’m missing to really elevate the game. What’s here is definitely good, and I’d play more of it if there was a second campaign, or more than just two bonus missions. It just plain needs more, be it in volume or flavour, to push me beyond a moderate recommendation.