Steelrising: Beta in August, pre-order phase has started for the Soulslike

06/16/2022 at 2:00 p.m
from Karsten Scholz –
Steelrising, the current project by Spiders (Greedfall), will be released on September 8th, 2022 for PC and consoles. If you want to play the Soulslike action-RPG with the special setting, you can pre-order the game now and get a cosmetic set and exclusive access to the beta on August 25th.

Thanks to the exciting setting, Steelrising already caught our eye when it was officially announced. The Spiders (Greedfall) Action RPG takes place during an alternate version of the French Revolution. In this world, Louis XVI. crush the revolutionaries with his merciless mechanical army. Of course, it’s up to us to scrap the steampunk robots. From when? From September 08, 2022. On which platforms? On PC, Playstation 5 and Xbox Series X/S.

01:02
Steelrising: Magical trailer for the new RPG from the creators of Greedfall

Want more games like Elden Ring? We introduce you to 13 announced Soulslike that could appear in 2022 / 2023.

Steelrising: Magic trailer for the new RPG the Greedfall-Maker

Fight as a clockwork terminator against a mad king’s baroque robots in Steelrising: the new trailer for the action RPG from the creators of Greedfall.

With a press release, those responsible at Spiders and NACON have now started the pre-order phase for Steelrising. Each pre-order includes an Aegis Alternate Skin Marie Antoinette Pack and exclusive access to the Beta starting August 25th, 2022. But see for yourself: 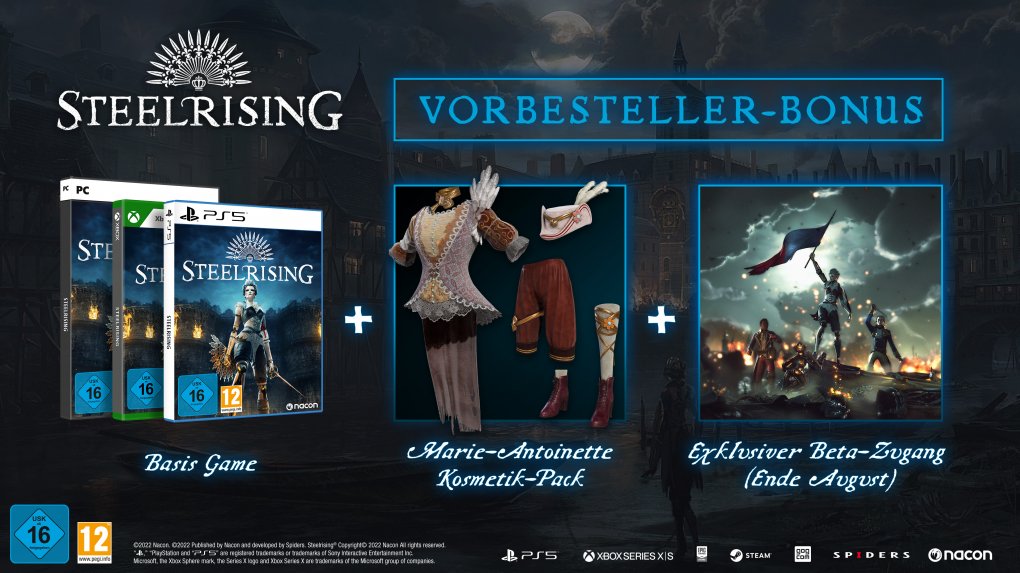 In addition, there is said to be a “Bastille Edition” that will contain the DLC “Cagliostro’s Secrets”, which is planned for early November. “This chilling adventure takes you to an all-new area that hides the secrets of the king, and features new enemies, weapons, and costumes to unlock. The ultimate goal is to unravel the mysteries of the alchemy that powers Louis XVI’s automatons. The Bastille Edition is only available online.”

Screenshots and information about the main character

If you want a more detailed picture of Steelrising (buy now €49.99) you can find a trailer above and below a gallery with official screenshots.

And here is some information about the main character Aegis: “Aegis, once an automaton who danced for the pleasure of the court, is now a warrior, Marie Antoinette’s bodyguard. On behalf of the Queen, Aegis must navigate a Paris teeming with machines. Each battle with the mechanical ones Enemies is a challenge that will test the skills of the fans and it’s the price those who want to change the course of history will have to pay.”