The best in new worlds, shooting and jank from survival games at the Steam Next Fest 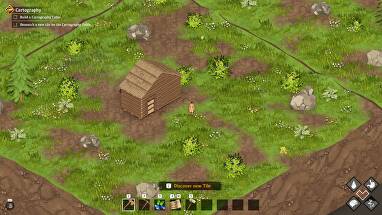 There’s something so intriguing about a new survival game. You just never know what you might find, with some becoming the best thing since cubed diamonds and others getting left in a state of endless early-access jank. Partly to help you all avoid the duds and partly to satisfy my own morbid curiosity, I trawled through this Summer’s Steam Next Fest demo list to test out a bunch. As you might expect, I got subjected to some chugging framerates and a bit of body horror, but also found some great multiplayer shooting in Dysterra and terrific tile-placement in Above Snakes, which might just become a new personal favorite.

Above Snakes is the best of the bunch, so I’m whacking it at the top of this list for everyone to see. It’s a Western-inspired isometric survival game in which you play as a woman named Aiyana who lives on the outskirts of a town named Corpse Creek. Obviously, a meteorite falls on Corpse Creek and causes a zombie apocalypse. The residents of Corpse Creek shouldn’t have expected any different.

Aiyana must survive in this now dangerous land, and it seems pretty small at first. That’s because the game begins on one singular square tile that contains little more than a few trees and berry bushes. As you explore and gather resources to build the standard survival stuff like a campfire or a base, you will earn points that you can spend to generate a new tile on one side of the square.

This isn’t just a fancy way to handle procedural generation, though. You get to choose the biome of the new tile, with each biome (like forest or lake) offering new materials, animals, and sometimes even NPCs that you can meet. You’ll need to think strategically so your world has what you need to manage your hunger, thirst, fatigue, and sanity. I had to force myself to stop playing Above Snakes to test out other stuff on this list, and I want to find more time to play before the demo disappears at the end of Next Fest, as Above Snakes won’t launch until early 2023.

Frozen Flame was shown at the PC Gaming Show, and the trailer showed the player flying around as a bird. Of course, I had to investigate, and can report that about 5 seconds of my time playing was spent as a bird. The rest was lots of chopping trees, mining rocks, and running back to base to build another wall. Very survival-y.

Frozen Flame will have two modes, Campaign and Survival, but I could only play the campaign for now. As you might expect, that made Frozen Flame much more objective-oriented than many other survival games. Where Minecraft or 7 Days To Die are about surviving the night by building a shelter and strong weapons, Frozen Flame’s campaign is about hunting down bosses that have weird masks in more of a Valheim-y fashion.

Those bosses are quite tough, so you’ll need to spend time crafting better gear, leveling up, and generally survival-ing. You level up by collecting Frozen Flame from regular enemies, which is a silly way of saying XP. It’s a loop that lets you feel a strong sense of progression, but ultimately things felt a little too spaced out in the demo. Usually in a survival game I’m always doing something in a survival game, that is collecting lots of little berries while hunting for more important resources, but Frozen Flame’s world is a bit sparse right now. Even early on I was struggling to find enough trees and stones to make basic items. I did find the funny light ball hat that I’m wearing in the image above, though, and I love it.

Dysterra places you on a ruined yet very sci-fi Earth at some point in the future. You have to survive amidst the rubble, scavenging for metal, wood, and other materials that you can use to – you guessed it – build weapons and a base. There’s also a resource called Terrasite that you use to power your fancy sci-fi tech.

What made Dysterra stand out was that it’s actually a decent FPS as well. Within minutes I’d crafted an assault rifle and more ammo than you’d find in an entire Fallout game, and then I got to shooting plenty of angry robots that kept appearing out of absolutely nowhere (they’re either stealth masters or have some very wonky spawns). I often found myself overwhelmed and apparently so did the game, as it often dropped into the 15-20 FPS range during combat – but there should be plenty of time to optimize performance, as Dysterra is due out at an “undecided” time according to Steam.

Dysterra also puts a lot of emphasis on multiplayer, and I popped into a fairly busy online server to check that out. I used the lasers in my robot arm (you have a robot arm) to mine some metal from the rubble and built a little password-protected hut, before heading over to the robot-infested ruins to scavenge some food. That’s when I spotted a few players in the distance. They immediately started shooting, which I suppose is actually the correct response to a random person charging around with an assault rifle. That FPS multiplayer chaos is Dysterra’s biggest strength, and I think those looking for a more sci-fi Rust should keep an eye on this one. Be warned, though, that it will want a lot of your time. I was told before logging out that my character might starve to death while I’m gone. I can barely keep myself alive, Dysterra, so I don’t think I have the energy to feed my generic sci-fi guy every day as well.

If Above Snakes is my favorite because it is interesting and fun, robber baron is my favorite for just being exactly what you’d expect from an upcoming survival game that’s going to launch into early access. All the jank. While walking around in the first few minutes, my character glitched and allowed me to see my own teeth. Then I crafted a bow and shot a rabbit, which proceeded to writhe on the ground as if some eldritch horror was about to burst out of it. The guide character Hamish is permanently in a very aggressive pose. He just scuttles around like an angry crab, constantly ready to either bark some orders or tell you to fuck off.

Robber Barons didn’t offer anything new, really. After I made an axe, chopped down a tree, made a bow, shot a rabbit, and collected some meat, I went back to Hamish to get a new objective and he asked me to sell the leather I’d got from the dead rabbits to some nearby villagers. I went to the village and met lots of NPCs who were willing to trade their goods for some coin. Unfortunately, I had found no leather. My robber baron journey came to an end. I recommend trying this on the basis that such classic jank is hard to find these days. Honestly, though, it probably wasn’t demo-ready.

Retreat To Enen is set to release on 5th August, making it the only game on this list with a firm release date. It’s also the most relaxing survival game I’ve ever played, but that just makes death so much more surprising.

After Earth has been ravaged by climate change, war, and other nasty stuff, a group of survivors form a colony that focuses on rekindling their connection with nature. This colony sends all of their new members out into the wild to live off the land as a test, which actually sounds more like a cult. You play as one such member, and living off the land turns out to entail a lot of the survival stuff that most of these games have. You know the drill: eat, drink, make items with a few twigs and pebbles, and build an impressive base that makes you consider a degree in interior design.

Unlike other survival games, however, Retreat To Enen also emphasizes mindfulness. The sparkling blue lagoons beg you to take a dive, and the lush forests hide few dangers. There’s even a calmness meter that you must maintain by meditating at various pods, during which an icon will appear that expands and retracts to guide you through your own breathing exercise. As someone who has basically forgotten how to relax, that was a really nice touch. What wasn’t so nice, though, was when my character died about five minutes later from a disease that I apparently caught while swimming. It was very unexpected, but I guess Retreat to Enen wouldn’t be a survival game if you couldn’t die, right?