With The Quarry, Supermassive returns to its roots: teen horror, dark woods and all die (maybe) 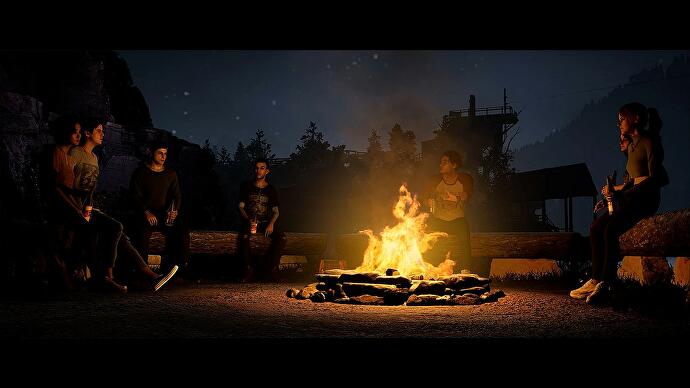 That may not sound right intuitively at first, but: Teen horror is a science in itself. You can tell by the fact that the best films and games in this subcategory are timeless milestones. The worst are boring, underwhelming, or gross in the bad way, and one wonders how the genre even got this far. Even if the recipe is basically unchanged, two works can diverge so far in quality.

In the world of video games, since Until Dawn, Supermassive Games have been the undisputed kings of this genre of scary fare intent on maximum entertainment. Probably because the Guildford team in England understands that teenagers are a fabulous projection screen for horror themes. Where the cheap exploitation horror of the 70s and 80s primarily scared scantily clad schoolgirls and young female students through the undergrowth for the male eye, Supermassive, like the best directors of genre cinema, understands why this really worked.

For everyone, being a teenager marks a time in one’s own biography that is perhaps not always fondly remembered, but in any case is vividly remembered. The cast of characters and the underlying story, which is often rooted in real youth issues, create an environment in which as many viewers as possible feel familiar and at home. After all, who doesn’t have or had no gym braggart in their class, no creative, daydreaming wallflower, no class beauty adored by all the boys? Most people also know the bookworm with the earplugs, the hot exchange student and an extroverted prankster who makes everyone laugh.

It sounds so simple, but in fact one quickly registers when those responsible behind a work no longer have any connection to this reality of life (or never had one) and only rely on the universal appeal of this genre of horror for cynical money-wasting. That’s often the subtle but crucial difference, even before a botched story, bad actors, or lousy creature effects can screw up a teenage horror film. As I said: It is a science in itself, but one that cannot be studied. You either just internalized it or you didn’t.

See also  Evil Dead: The Game - All Trophies Guide - All Achievements for the Platinum Trophy

In any case, supermassive master the language of good teen horror inside out. You know that teenagers also make perfect horror avatars because many wear their insecurities and needs on their lapels. In their mixture of recklessness and a feeling of invincibility, they also have a license to commit outrageously stupid things. Like walking up the stairs after a suspicious noise instead of running out of the house screaming. That’s a piece of wisdom (or, alternatively, rabbit’s foot) that takes years to learn, but would defuse many horror situations in a way that wouldn’t be good for the plot.

And finally, Supermassive knows that because of their youth, their characters strike a sometimes agonizingly exciting balancing act between potential and tragedy. After all, one rarely has more to lose than when one is 18 or 19 (or at least one thinks so). At the same time, the future is never as full of chances and possibilities as it was in these years. A dark forest filled with real or imagined bloodthirsty creatures and nefarious backwoodsmen, there is an escalation of the stakes on the nastier side of the spectrum of all possible outcomes. Because there is a fate that is worse than not realizing your childhood dreams.

The Quarry’s classic campfire-sounding spooky tale is supported by a talented cast consistently recognizable from other films and series. But they blend so well with their roles that you soon only notice Kaitlyn and not Brenda Song, Ryan instead of Justice Smith, or Max instead of Skyler Gisondo. That, too, is a secret of good teen horror: The structure of school or university archetypes is not replaced by stars and the corresponding “Hey, isn’t that…?” jeopardizing effects. You should be able to swim with this group. feel like one of them.

It helps that Supermassive’s performance capture technology has made huge leaps in the last few years. The actors are perfectly captured down to the last detail – or even with all their imperfections. The technology not only captures extreme emotions such as panic or pain on the screen, but also very subtle derailments of the facial muscles. For example, when a devastating realization slowly dawns on a character, or when an expression of affection apparently drips off a loved one like water off a duck’s back. After all, the best acting would be worth nothing without a medium to capture it and translate it into the game without loss of translation – and in The Quarry, high spirited actors meet a technique that is up to their work.

But the star is the highly branched story, which can end in 180 variations through your decisions in quiet or nerve-wracking moments. Nothing captures a youngster’s “anything goes” perspective on life in a video game like the stretchy, severable plot threads that a game like The Quarry lets you experiment with. They make you part of the ensemble, angel or devil on the shoulders of characters you either like, find interesting, or maybe even dislike. In this way you give them more profile – of whatever kind that may be – and writes a good part of their fate. Sometimes you and your moods will also be their downfall if your carelessness, high spirits or procrastination literally cost one of them their heads.

While you can also rewind the deaths (which I don’t recommend unless you’ve locked out on the controller), they still feel wonderfully massive and final. When the life of one of these youngsters stranded in the woods comes to an abrupt end with a single choppy scream, Supermassive always does it with the shocking precision of the best horror flicks. In the immensely entertaining co-op rounds with friends or the better half, this always makes for stimulating discussions about whose stupid idea it was not to pull the trigger on the shotgun after all. This is an experience that the film cannot give you in this form, either in the cinema or on the fully occupied couch. Because this fake blood also sticks to your hands!

The Quarry is great, engaging horror fun from people who have kept their inner teenager alive. Do you have that too?