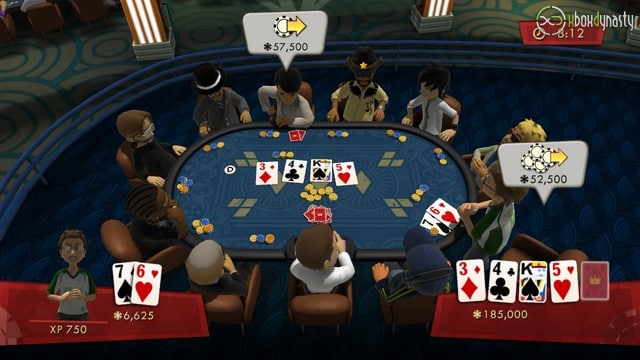 The boom is long gone, but we think it’s time for a new poker game in which we can play our avatars against friends.

Do you remember the poker boom at the beginning of the new millennium? From 2003, Texas Hold’em was an integral part of sports television and many people’s (online) tables. Poker became socially acceptable and from a game of luck to a high-priced strategy game. In addition, the poker boom brought us a very special game: Full House Poker.

After the great success of 1 vs. 100, which we also hope to make a comeback, Microsoft was looking for the next opportunity to let your avatars compete against each other in a social atmosphere. So, once poker left the backroom niche, it seemed like the time was right for a new kind of arcade game.

Full House Poker first saw the light of day for the Xbox 360 in 2011 and immediately won over critics and players alike. on Metacritic the title still stands at a good 77 out of 100 today. And in our Xboxdynasty test at the time, we also judged:

“Full House Poker is particularly popular with fans of the exciting card game. The successful support of the popular Xbox LIVE avatars alone is commendable. But that’s just a nice bonus for this arcade game and therefore impresses with gripping playability, numerous setting options and plenty of variety.”

In addition to the single player mode, you could also take a seat online against your friends or at the poker table for ranking positions. In addition, Microsoft threw avatar images of numerous poker pros into the race in a professional dismantling mode, which you were allowed to defeat round after round at the table.

The avatars were of course the highlight of the game. As with 1 vs. 100, Full House Poker offered you the chance to control your virtual image in a game. The great cartoon settings made sure that your avatars blended seamlessly into the casino environment. Thanks to the freely movable camera, you were able to immerse yourself completely in the environment.

The developers even thought of chip tricks back then. The digi-pad allowed you to run chips across your fingers or otherwise play around with them for interaction and style at the table. The gameplay itself offered the usual Texas Hold’em rules, of course, but the presentation and the sense of togetherness with avatars and friends were just something special.

Of course, the boom of the past has now flattened out. Cards are still played, but the games behind them are now called Hearthstone or Legends of Runeterra – and are mainly played on mobile phones. Speaking of mobile phones: Ahead of its time, Full House Poker even had an app for Windows Phone 7 back then.

So if you want to play poker these days, you can either go to the classic one online poker or on Xbox too Prominence Poker to grab. But as solid as this poker excursion may seem, it falls short of the fun feel of full house poker.

So, as with 1 vs 100, here’s our call to Microsoft: bring us back Full House Poker to the Xbox One and Xbox Series X|S. Especially with the new avatar models and the desire for digital social interaction, that would be a comeback that would be worthwhile.

See also  A crypto group buys an original copy of Jodorowsky's 'Dune' for 2.6 million euros with the (absurd) idea of ​​releasing the work

What are your memories of Full House Poker? Would you also like a new edition? Tell us in the comments.