Diablo Immortal: Simulation of how expensive a 5-star gem can be 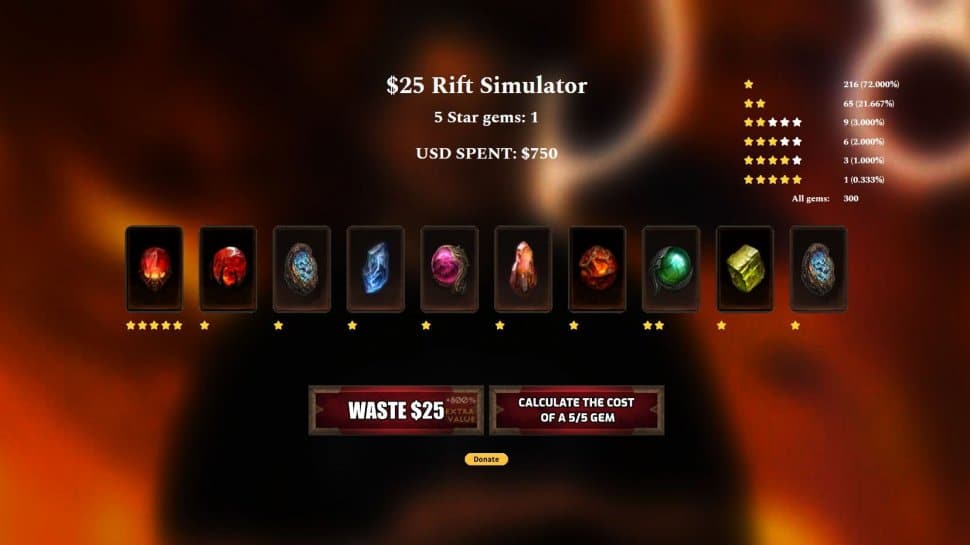 As befits a mobile game, Diablo Immortal is a free-to-play title funded through in-game purchases. Players can sometimes spend $100,000 to fully equip a character. We recently reported on a streamer who spent over $15,000 to get a 5-star rare item. Now a simulation shows how expensive it can get to get a 5-star gem in action role-playing games. in the Diablo Rift Simulator can simulate how much US dollars one would have to pay to get a virtual gemstone with a five-star rating.

In an initial test, the simulator showed a value of $1,975 just to get a 5-star item. However, another test run showed that you only have to spend $750 for a 5-star gemstone – so the range is wide. In the future, the developer u/buzzycat would like to add more functions to its program. So there should be detailed information about the items and a button where you can enter a certain amount and then find out what you will probably get for it.

After all, you buy from Diablo Immortal (buy now ) Loot boxes where you don’t know exactly what you’re getting before you buy them. There is only one chance for in-game items with a certain rating. In Diablo Immortal, players can equip their character with up to six gems. Elder Rifts can be made more difficult with Rare and Legendary Crests, which reward Legendary Gems. In addition to Legendary Gems, there are also Awakened Legendary Items and Resonance, which offer even more power. The financing model seems to be worthwhile for Blizzard, since 24 million US dollars in sales could be generated within two weeks, at least according to the extrapolation.

Also worth reading: Diablo Immortal controversy: Chinese release at risk due to criticism of the head of state? [Gerücht]