Cult Of The Lamb is like The Binding Of Isaac had a cute colony sim, but with more Satan 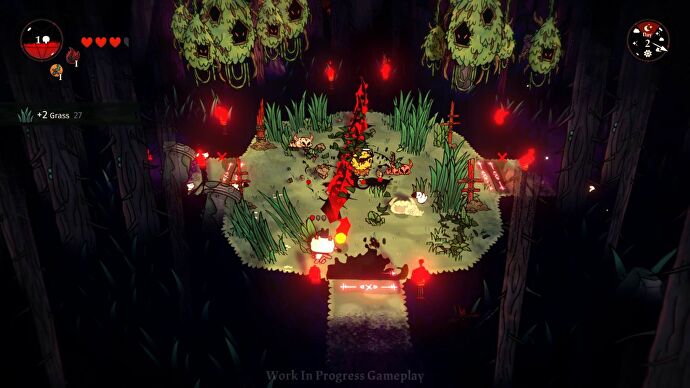 It wasn’t until I played a hands-on preview of Cult Of The Lamb this weekend that I realized how much ovine imagery is knocking around Christianity. All them lambs being sacrificed in the Old Testament, shepherds, flocks, the lion and the lamb. In Cult Of The Lamb, which is sort of a dungeon-crawling roguelite with a colony sim bolted on, you are a literal rather than metaphorical lamb. Although possibly also a metaphorical lamb. Point is, the game makes great hay from the juxtaposition of cute fluffy animals and a violent cult.

The game starts in media sacrifice as you (the last lamb) are walloped on the altar in front of four evil bishops. They collectively resemble a jigsawed assortment of the bits that go into sausages: eyes, lips, toenails, I guess that looks like an arm? They and their berobed worshipers are exterminating all the lambs they can find, but the joke’s on them, because you are immediately resurrected by an eldritch god trapped in some kind of Phantom Zone. In return, you agree to do their dark bidding. Your goals are to slaughter the bishops and their minions, and build up the titular cult. You also get a cool miter with an eye on it, which I was very jazzed about (it’s called the Red Crown in-game, but in my heart it is a mitre).

The preview build gave me about an hour in the game, a lot of which was learning-by-doing tutorial elements. Your goals are intertwined, but the first – the revenge bit – is largely accomplished with some good ol’ fashioned dungeoning. Each boss bishop has a different realm that you zip to through magic doors at your cult. Like The Binding Of Isaac, or Hades, or Moonlighter, or many other examples, the dungeons are a series of discrete rooms (which we may think of as such even if, in the case of this preview, you are in a big creepy forest ) full of enemies.

I saw giant, aggressive caterpillars, bats with an annoyingly big range of attack, and your standard enemy cultists in robes, as well as mini-bosses that stomp about spitting acid or fireballs. I faced a boss at the zenith of each section of dungeon, but could choose my own route through it, taking a path that might net me a new cultist, for example, or give me other resources I needed. A death, or completing an area, zipped me back to my cult, letting me throw myself back into the dungeon when ready.

Combat seems, at first sight, pretty simple. You have a sword and you swing it, and a dodge roll to evade the telegraphed enemy attacks. It’s pretty easy to read whether something is about to hit you or if you should hit it. No problem. But, oh ho, you can also find new weapons, like a dagger or a big axe, and equip a ranged special attack that, for example, cracks open the ground and shoots a line of tentacles. Some rooms in the dungeon hold a mysterious vendor who offers you a choice of tarot cards, which give you temporary boosts that last as long as you’re in the dungeon. These cards are often in the vein of more health, or applying poison damage to your hits. One run I got rack all, but in another I managed to stack about 10 different cards. This is the essential push and pull of the randomization in roguelites, and here, as in most, it is great fun.

The other half of the game, your goal of setting up a big cult, is also surprisingly complicated – more so than I was expecting. New members are all little animals like deer or piglets or cows, and have randomized attributes like being naturally skeptical (instantly losing you some belief), or recovering from injuries quickly. When they arrive they can be set to work gathering different resources or worshiping at your central shrine to generate that aforementioned belief. On returning from your sojourns to combat you need to cook, clean, and perform sermons to top up all your cultists’ needs. Your cult has to have a farm, a church, and somewhere for everyone to sleep, so the gold and resources you collect while adventuring are put to good use.

In fact, I found foraging during my bouts of killin’ to be pretty mandatory, since I quickly exhausted all the trees and stones around my cult site. At the same time, I needed to keep my cultists happy and healthy (not to mention loyal) because the belief they generated unlocked new weapon types and abilities for random drops in the dungeon. I expected the colony simulation to be the smaller part of Cult Of The Lamb, but if anything I spent more of my preview making sleeping bags and fielding bizarre quests (including one to make a bowl of poop for dinner ‘cos it’d be funny ) than I did slaying the unrighteous.

Unrighteous is a relative term, of course. Sure, the enemy are ritualistically murdering my compatriots, but I have turned right around to do the same thing to them. And the uncomfortable yet cool truth is that my god, The One Who Waits, is quite clearly pretty, you know… Satany. They’re chained in a nether realm, and I want to see what happens if they escape, because it cannot be good. My character’s lamb eyes glow red quite a lot, and pentagrams are a heavy feature of the decorating. Even the rooms in the dungeon where you can heal have a guy fishing in a blood pond for his lost heart, and he has so many surplus ones that you can just take however many literal hearts you need

And it’s all 50% cute – the hearts around the pond are dancing love hearts – and 50% horrifying – behind them is a huge, almost anatomically correct heart tied down with ropes like a hunted whale – in a very memorable, cool way. The concept of Cult Of The Lamb is great and often funny, plus the dungeon runs are layered enough to stay interesting. At the same time, I can see that the colony sim might become an actual chore, leading to you grinding the same section of dungeon again and again to get enough wood to build a new load of sleeping bags. Your bloody god may yet move in mysterious ways.