Man donates €143,000 to fight hunger, lets himself be celebrated as a hero – becomes a villain overnight 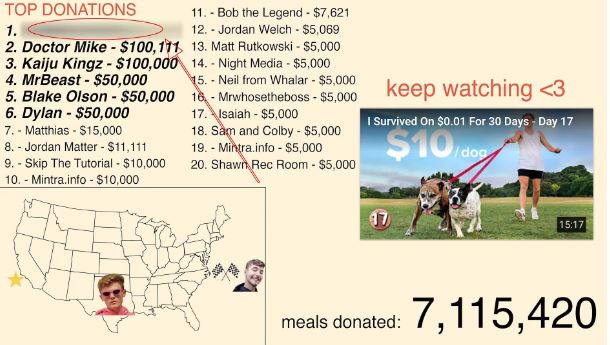 YouTuber Ryan Trahan is one of the up and coming new minds in the US. He wants to support a charitable organization with a 30-day event: But his most diligent donor turned out to be a scammer.

What’s going on for an action against hunger?

Nice man announces donation of $100,000 in video call – to be celebrated

What got you excited? There were some celebrity donations at the event: MrBeast himself donated $50,000 to reset Trahan’s progress so that he would fall back down to 1penny from his bargained money.

But a man named “Paul Dodds” who had just started on YouTube turned out to be a great donor.

Dodds had already topped the top contributors with $50,000 when Trahan reported on day 11 of the event: “Top contributor Paul Doss just contacted me and asked if I was available to chat. So I’ll talk to him right away.”

In a video call, Dodds agreed to donate an additional $100,000 and later did.

Trahan extensively praised Dodds as “the most people-friendly person on the platform”.

Destiny 2 Twitch streamer says: A millionaire fell in love with her, now she’s ruining her

As the Sportsskeeda website writes, Dodds also benefited from the conversation with Trahan: His YouTube numbers exploded after the video call.

Here’s the video of Trahan’s video appeal to Paul Dodds (segment starts at 0:24):

Name is only blurred – donations were obviously not real

This is how it went on: This good mood was over just a few days later.

Paul Dodds’ name suddenly became blurred on top streamer lists for all videos on the channel.

In addition, Dodds had now deleted his entire appearance from social media.

That’s the discussion now: At the moment there is no confirmation of what exactly happened. But on YouTube, many assume that Dotts’ donations were a scam to gain attention and positive feedback in the meantime. Apparently the donations were reversed or otherwise proved to be false.

Some even say on Twitter that the man is a known scammer who has fooled people with other scams.

There is still no statement from Trahan on the matter: He obviously does not want to let such a number spoil his good mood and his great action.

There is always trouble on Twitch:

Twitch streamer collects donations for a good cause, keeps the money for himself