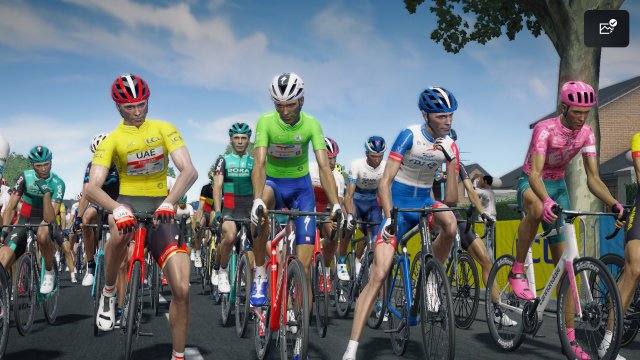 I love it when I learn new, exciting things while researching a topic: The first race in the 2022 Tour de France was the classic Liège-Bastogne-Liège – there is far more to it than just the 21 stages of the current France -Tour in the game. Scrolling through the driver selection, I got stuck on Alejandro Valverde. He was already there in 2002/03, when I – a fervent Tour fan – followed every stage of the big loop live on TV! 20 years later, Valverde is still leading, and still at the front. I’d noticed that he’d won classics here and there, even the road world title once, and I hadn’t missed the many top finishes in the three grand tours either. But now I wanted to know more about it! So, even before I had pedaled the first virtual kilometer, I dug deep into the cycling-enthusiastic part of the internet and found what I was looking for: Valverde has even won an incredible amount in his 20-year career despite a doping ban in the meantime (keyword: Fuentes scandal). He ranks in the eternal leaderboard, where points are awarded for all achievements and placements, even at rank 4 behind legends like Merckx and Bartali. So my feelings had not deceived me! And yet the Spaniard, unlike Ullrich or Armstrong, only knows the real fans of this beautiful sport.

200 twins compete in this year’s Tour de France. The winning photo is known before the start…

Valverde on the PS5 only helped me to a limited extent – I led the field with him for a long time, but in the final sprint of a breakaway I had to settle for second place. Did my short excursion into cycling bore you or did the word “breakaway group” leave you perplexed? Sorry, it’s getting nerdy here. The tour community just throws around empty phrases – anyone who has followed the spectacle on TV for years can hardly avoid technical terms. Just as little as the obligatory memory of Tom Simpson, who fell off his bike on Mont Ventoux in 1967 and died from dehydration. But I try to hold myself back – even if a Belgian roundabout is pulled up shortly before the flamme rouge on a flat stage and my water carrier is worried that a starving branch will break the waiting period and have to go to the stage destination in a broom wagon… 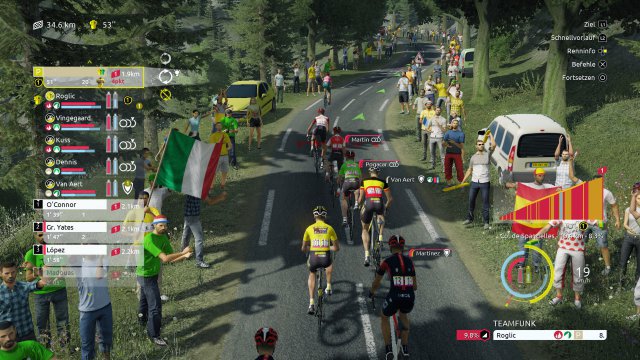 Lots going on on the mountain: Thanks to exemplary HUD overlays, you always have a good overview, even in turbulent racing situations

The French Cyanide studio has been providing us with the official games for the world’s most famous cycle race for several years. Every year an update is delivered with the current teams, drivers and of course the tour course – the Tour de France has a wide variety of stage destinations, routes and guest appearances in other countries to offer every year. Basically, the procedure is comparable to Formula 1 (click here for our current top test), FIFA games or Milestone’s motocross racers. And of course that comes with problems: Cyanide isn’t a big studio, so a lot of things just stay the same; sometimes content is even deleted or the graphics are hardly touched for years. Unfortunately, this also applies to the Tour de France 2022: I’ll go into the new content in a moment, but the simulation is particularly technically stagnant. The PS5 version from 2022 is not much prettier than the PS4 version from 2017 – many scenes are still static and dreary, the texture quality on and off the asphalt is very manageable. Spectators, who skirt the tracks and often dramatically narrow the space on the mountain passes in reality, move in the game like the very first Sims. And although you usually only see the backs of the pros in the races, it’s cheeky that all 200 cyclists have the same (!) face. When the camera pans over the waiting athletes at the start of the stage or they climb onto the podium after crossing the finish line, it just looks embarrassing. 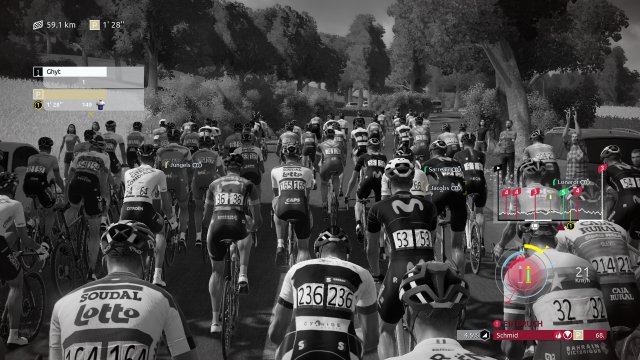 See also  Powerwash Simulator: Xbox crashes in multiplayer will be fixed as soon as possible

Anyone who overdoes it when starting up a mountain or fleeing forward will run out of breath. The black and white view conveys this very well – and although it only lasts a few seconds, your chances of victory are then usually passable.

Anyone who is starting a Tour de France game for the first time or has been out for a few years should definitely complete the tutorials: there you will be taught in a matter-of-fact but well-structured manner how to lead and steer, which buttons to attack or when finish line are used, which effect time trial position and red or blue fitness gel. Also very important: How to switch to the team radio to give your colleagues instructions and let parts of stages run faster. Because: Such a tour also takes place virtually! Not everyone wants to do all 21 sections – that’s how you can “wind away” 100km in five minutes without major tests. Incidentally, the driving doesn’t take place in real time: If you cycle a stage that in reality might take six to seven hours, you should allow half an hour for it. The HUD during the race is exemplary: you always have an eye on the time gaps to other drivers, are informed in good time about intermediate sprints and see the stage profile. When driving uphill, a graphic with the incline profile comes into view; when going downhill, the next bends are displayed. Cyanide has now established a very well-functioning system here. But there is still room for improvement when it comes to comfort: Winding is practical, but only works at one speed. And it’s also not possible to simply skip 50km at the push of a button. The warning system is clever: Even if you have set it to fast forward to the X hill climb, the system will jump back to the racing action if something exciting happens, such as an attack by a competitor in the general classification.