RPS GOTY Revisited: 2009’s Dragon Age: Origins may not have been the best that year, but what a world 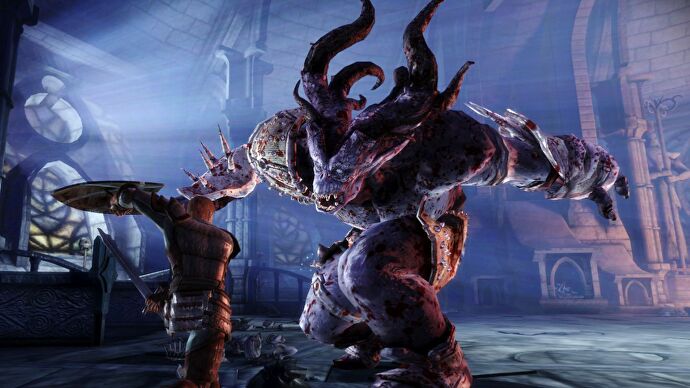 RPS GOTY Revisited is all about revisiting our previous games of the year to see how they hold up today. Did the RPS Hivemind get it right back then? Or has time told a different story?

Dragon Age is one of my favorite game series. I replayed Dragon Age: Origins recently not for this column, but for fun. That’s the kind of wild gal I am. Origins was one of the reasons I got into PC gaming, because my dinky laptop wasn’t good enough to run it and I was desperate to play it after seeing the trailers. I spaffed some of my student loan on a new desktop and spent four months eating nothing but cheese sandwiches. At the time it felt worth it. Watching those trailers now is like opening a time capsule full of fantasy tropes and, for some reason, an incongruous chugging guitar song by someone we don’t need to mention ever again.

Replaying it now is a different experience. It’s still a really cool RPG, notable for very good world-building and a cast of interesting characters (that you can have sex with in a cold tent), and it continues to hold a dear place in my heart. On the other hand, there’s a whole section that’s such a mind-numbing slog to get through that everyone hates it and there’s a mod specifically to remove it from the entire game. Origins is a game I very much like, yet sometimes struggled to explain why it is good. But I’m not alone in thinking so, ‘cos in 2009 this was RPS’s Game Of The Year. Can’t blame me for that. I didn’t even work here then.

See also  Call of Duty: Modern Warfare 2: Release date is set - these legends are there

Dragon Age: Origins is, superficially, your standard struggle of good vs evil. The last bastion of hope is a ragtag group of heroes who unite different factions to fight against an external existential threat. In this case, the external existential threat is the Darkspawn Horde, a bunch of skeleton-y demon lads led by a dragon, and your gang is eight-ish (depending on your DLCs) oddballs that you collect like different shaped and variably aggressive balls of lint from the carpet weft of the high-fantasy world.

You yourself are a Gray Warden, an ungovernable group of warriors whose raison d’etre is fighting the Darkspawn. You have to huff it up and down the land of Ferelden to convince the facts – dwarves, elves, mages and some regular soldier guys, I guessif they have to come – that the Darkspawn are really properly about to take over the world if we don’t do something lads. You may recognize this as similar to the plot of a Mass Effect game, and yes, Dragon Age is also made by BioWare.

It’s a sequence that turns you into a teenager: “Oh Gooooddddddwhat naaaaoowwwwwwuh!”

Parts of DAO feel like they’re aging in 2022. I loaded it up with mods to make some of the textures nicer (which did make DAO prone to crashing in some of the busier areas, but that’s on me; the vanilla game runs pretty solid), but I’m not having a go at it for looking as old as it is. It’s more obvious in the construction. Large sections feel like padding, specifically that part I alluded to up top. The first time you play the game it suggests you go to a town, which leads to you having to save a noble boy, who turns out to be possessed by a demon, and to save him you need some mages. So you go to the mages’ tower and find that they’re all possessed by demons too, and you have to slog it all the way up the wretched thing, floor by floor. other then, for no reason you end up in a sort of parallel dimension where you have to turn into a mouse a lot. It’s a sequence that turns you into a teenager: “Oh Gooooddddddwhat naaaaoowwwwwwuh!”, and that final mouse-centric part is so boring I think I must have blocked its existence from my memory.

But DAO does have a lot going for it around all that. For one, the combat still holds up really well. Whenever you’re adventuring around you take three characters with you, so you can build a balanced team of four. Broadly speaking, everyone (including yourself) is either a warrior, rogue or mage, with further subdivisions. Do you want a sword and board, or two-handed great axe? Ranged archer or up-close assassin? Healer or creepy swamp witch who can turn into a spider? Dog or not a dog?

Fights themselves are real time, but benefit from near constant pausing to survey the battlefield, queue up actions and move troops around. You can take control of any character, but any you’re not piloting are controlled by AI ‘tactics’, which you can fine-tune to a surprising degree, deciding when they’ll trigger certain abilities or chug a health potion. It all facilitates battles that are simultaneously considered and slow-paced as well as down-to-the-wire nailbiters that you only won cos you got a crit on that last fireball. It’s not very welcoming, though. It’s one of those systems that you’re either decent at or just cannot make work, flailing as all your characters collapse two seconds after yelling their canned line about needing some help.

But there’s also a nice weaving in of the RPG-ness of the game. If you take the time to properly explore and find different options before committing to something, you can make life easier. For example, in an early fight in a town called Redcliffe you can convince a few NPCs to fight alongside you, as well as get the villagers to set up some better defences. It’s a parallel with how your accumulated choices can affect what characters think of you and where the story goes. It is, after all, an RPG.

The RPG elements were and are another big sell. The first, and arguably biggest, choice that you have to make is your character’s origin (with six to choose from, depending on your race and character class), and this changes the whole opening segment of the game – as Cyberpunk 2077 would go on to do, to a degree, almost a decade later. You do end up on the same ol’ save the world railroad whatever you pick, but it has little knock-on effects, making it feel like it’s properly handed you the reins. The other choice is who you choose to be friends with in your gang, with an approval system that gains or loses you points with every companion depending on how many puppies you kick in front of them.

NPC relationships are your standard put-coins-in-machine-receive-friendship method of managing relationships in an RPG, but the characters themselves are really great, well-rounded and interesting people brought to life by great writing and a solid voice cast. Wynn is the mum of the group, Oghren is the drunk uncle, the dog is your dog, and so on. Origins kickstarted some fan favorite characters like Morrigan, the most impractically dressed swamp witch history has ever seen. I think it’s the characters and the world building that really pushed Dragon Age into unshakeable franchise pillar territory.

I’m not usually a fan of world-building in fantasy and sci-fi stuff because it seems like the writers are having way more fun with it that I am, but to BioWare’s credit they’re really good at just making this world and then putting you in it. If you want to ask a dictionary disguised as an NPC about their life or what they think of this, that and the other, then you can, but otherwise you can just collect snippets of knowledge from context. It’s so impressively alive, so almost real in how it’s written and constructed.

There’s much to be said about the relative successes of the portrayed of different fantasy races and cultures in the game, but Thedas (a name derived from the placeholder “The Dragon Age Setting”) is, from the very first game in the series, a fully realized place. It has history – even better, it has history as told by the victors, and you can see where the forks are. There are wars, religions, factions, countries. There are regional accents! Feuding witches! Dragon Age: Origins provided a rock-solid foundation for more games – including the upcoming Dreadwolf, assuming BioWare haven’t pissed it up the wall with bad work practices.

Now. Does that mean it was the best game of 2009? Looking back now, with my hand on heart and a Dragon Age tattoo covering my entire right shoulder, probably not. It was the new hotness – the new shit, as the trailers would have you believe – but was it actually better than Left 4 Dead 2, or making a shift as impressive as Assassin’s Creed II? Probably not. Arkham Asylum came out that year, for Pete’s sake! A good year for games. I’ll always be glad it exists. It means so much to so many. But honestly, unless you really care about the lore, you should probably just start any Dragon Age journey these days with Inquisiton.