Knights And Bikes and the joy of personalizing your ride 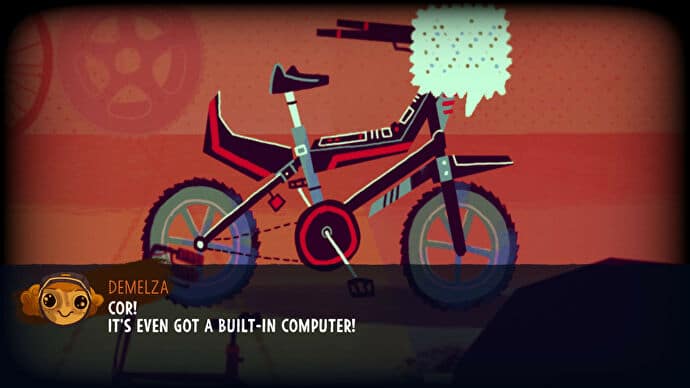 After starting my Tour De Jeux with the official Tour De France game, stage 2 takes me to Knights And Bikes. Foam Sword’s 2019 game evokes childhood joys of zooming around with your pal and tricking out your bicycle with reflectors and Spokey Dokeys. That might seem far from the Tour De France but grown-up cyclists are just as keen on customizing their bikes for coolness, and even some Tour bikes are rocking garish decoration this year.

Knights And Bikes is the tale of two 1980s kids getting into adventures and mischief in the hunt for lost treasure. Nessa and Demelza whip around the Cornish island on bikes and have the best time. Bicycles give them freedom to go where they want, whenever they want. This is about the most relatable cycling experience in video games, a big puddle splash of joy and nostalgia. There’s such joy when they go fast, Nessa standing up and leaning forwards while Demelza leans back and kicks her legs forward off the pedals. And Knights And Bikes offers the dream of making a plain old boring stock bike into your very own dream ride with cool accessories and decorations.

I like that customizations are ‘bought’ from the bike shop by swapping them for kid treasures: stickers, badges, bread tags, worms, plastic gems, finger monsters, and broken toys. Kindly shopkeep (and former racer) Oba acknowledges their value to you, makes you feel like you’ve earned them so they’re extra special, while he simply wants to share the joy of bikes.

Growing up with car boot sale bikes passed down from my sister, I ached for a cool new bike. I drew dream bikes with cool paint jobs and labeled components with imaginary cool names (gotta have those Speed ​​X3000 wheels). I once spent hours writing 100 entries for a newspaper competition to win a bike clad in cool plastic panels like a blue fighter jet (which were presumably invalidated by bunging the lot in one envelope). I begged to an annoying degree for going on my neighbor’s Raleigh Lizard, an iconic 90s kids’ mountain bike with striking green paint and orange bottle cage. And every time my sister outgrew her bike and we shuffled bikes down the family, I carried over my accrued spoke beads and reflectors to make each louder and shinier than the last. I’m just jealous that Nessa and Demelza gain such treasures so easily.

While grown-up cylists aren’t so much into Kellogg’s Corn Flakes reflectors, coolness is often still a consideration. Many people do just buy a bike, any bike, whichever bike they can afford, and leave it at that, which is totally fine. But I really enjoy seeing people on bikes with looks they clearly take pride in, a wide spread of aesthetics grown from interests and subcultures.

A common sight beneath speedy enthusiasts is black on matte black (‘murdered out’, as the kids and Kim Gordon says). I do like the vintage-styled bikes I see about, slim frames in classic colors with smart brown leather trimmings including the ubiquitous Brooks saddle. Gravel bikes (a type of bike happy going fast on and off roads) often have the ‘tacticool’ vibes of suburban dads who love buying kit with straps—which I say lovingly with a gravel bike as my own main bike. And while it’s not my style, I admire the hell out of anyone riding a Dutch grandma bike with a handlebar basket (ideally containing flowers, vegetables, or a thrilled wee dog). I’ve even seen a few Sinclair C5s pedaled around Edinburgh. Keep an eye open and you’ll notice other styles including, yeah, totally that childhood brash trash clash.

Beyond the broad strokes, cyclists often trick out bikes through their pick of components. chainshandlebar grips and bar tapetyres, bells, cassettes, pedals, and all manner of fixtures and fittings come in a wide range of looks, from simple colors and metals all the way up to wildly shifting prismatic affairs. You do need these parts, so why not try to make them cool? Even upgrades like fancy disc wheels are often for looks as much as aerodynamics. And while you’ll not hear Spokey Dokeys clitter-clattering, one minor modern fad is loud freehubs (the clicking bit which lets your back wheel spin when you’re not pedalling), with some riders desiring hubs which sound like a swarm of bees wearing tap shoes. Yeah, I don’t get that one. And speaking of the subjectivity of coolness…

The pro team EF Education-EasyPost are riding unusually striking bikes in this year’s race. Ostensibly to celebrate the impending debut of the Tour De France Femmes (the latest attempt at a women’s equivalent), their clothing, bikes, and accessories have designs created in collaboration with Palace Skateboards and cycling clothiers Rapha. It’s a 90s clash of pink, blue, yellow, and white with big logos, dragons, and ♀ glyphs, and it is the ugliest damn thing. Even Nessa and Demelza might balk at that.

My sensitive sensibilities aside, I do appreciate this boldness in a sport where designs are often most richly described as existent. Palace X Rapha certainly provokes an aesthetic reaction. I’m up for more fashion-fashion in cycling so hopefully the attention they’re getting will inspire rivals to seek other, better collaborations. And maybe the answer to “Why are EF riding such ugly bikes?” will make enquirers more aware of the Tour Femmes, help it become a permanent fixture and grow. That’d be nice.