The Korean streamer So-ra Park is as former K-Pop Star of the girl bands BULLDOK and PEACE is still an idol for many of their fans. In the meantime, she has found a new job and inspires her large fan base as a sora629 on Twitter, which also generates a lot of attention here. But recently one worried high donation for a sensation and leaves that former teen idol speechless will.

What happened? So-ra “sora629” Park celebrated her 32nd birthday last Wednesday with a multi-hour Live stream on Twitch together with all her fans. Then suddenly one tumbles out of nowhere $100,000 donation of a fan named tako a – with a message to the “best singer and dancer”.

She reacted so surprisingly that she was almost speechless. Touched and overwhelmed by the surprising gesture, Sora finally thanks her loyal fan for this generous donation. Here you can see the relevant excerpt from the Twitch video:

as Twitch star such large sums of money Getting it in this way is hardly ever the case, but this is not an isolated case: one of the most well-known examples of this type is the YouTuber MrBeast who regularly keeps his large fan base happy with various activities, such as a real squid game event to perform with hundreds of candidates.

Last year he caused a sensation when he even gave unknown Twitch streamers five-digit amounts or more for sometimes simple tasks. 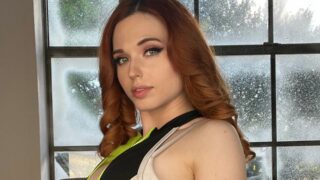 Twitch star Amouranth shares what she knows before she retires

In this case, one can assume that the donated money has also reached the fans. How it looks in the case of Sora, however, remains open. After all, such a large sum could be a nasty joke, but we hope not.