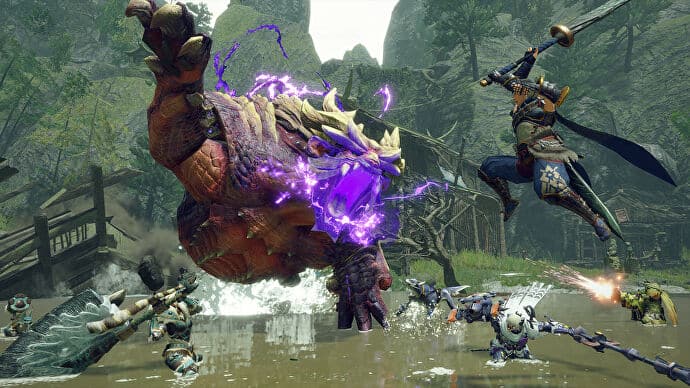 Monster Hunter has always been a series I’ve admired from afar. Like that smiling face with a tear running down one cheek emoji, I’ve watched friends discuss the trials and tribulations of a great Tigrex hunt and watched YouTube videos breaking down all the cool things you can do with the Insect Glaive.

So, with Monster Hunter Rise netting itself a bestest best badge and its Sunbreak expansion getting some serious praise in our review, I thought it was time to pull up my regular socks in the hopes that I could replace them with a pair woven from a big lizard’s gooch. And I think I’m enjoying it? I think those socks could be mine? I just need to stop my brain from short circuiting first.

My first impressions of Monster Hunter Rise are, thus far, that the tooltips are ceaseless, unrelenting, dense. Training scenarios guide you through the basics early on, teaching you how to control your hunter through doing. Then the pace quickens, because it thinks you’d rather not dawdle. You pinball between Kamura Village’s important denizens as tooltips with actual paragraphs and multiple pages do their best to reinforce memory recall. My mind flicks back to Yakuza 0 and Kamurocho’s many streets lined with folks handing out pocket tissues, which is an actual marketing strategy employed by advertisers in Japan. Monster Hunter Rise’s opening hours are littered with invisible phantoms handing out the equivalent of pocket tissues, except they’re leaflets with hunting tips on them.

I haven’t got a photographic memory, so I’m struggling to keep up with it all. Everything seems to have a menu of its own. There’s an owl called Cohoot who I can pet and feed? There’s armour, but there’s also layered armour, which I think is basically transmog? Village quests differ from Hub quests? And I’m meant to consult my own comprehensive hunting manual when faced with these questions. I feel like I’m the intern at the hunter’s county council meeting, and just when I’m on the cusp of clocking what they’re on about, they move onto another policy.

Thing is, I get why Rise slams you with tooltips. If the game provided training scenarios for every single little thing, I’d become impatient and lose interest just as quickly, if not even quicker. That’s me admitting my waning interest, sorry. But there’s a small glint shining through the wall of text and that’s the RPS Treehouse’s enthusiasm for the game. If I poke my head through the crack, I see Liam and Katharine skipping down the village in their Blazing Porcupine gear and I want in.

The flipside to the game’s sheer wealth of possibilities is the reason why I’m veering between quitting and powering on. When jetting off on a hunt, carving up a raptor’s golden tooth, and crafting a set of pajamas out of it, I’m fond of how rhythmic the procedure is. You can tack things onto your routine too, like eating a hearty meal beforehand so your belly’s full with stat buffs, or carefully preparing your traps and potions. More and more it begins to take on a ritualistic feel, like you’re participating in an ancient art form that’s been practiced for generations. And as silly as that might sound, I’m desperate to become a part of that hunter’s community and understand its esoteric systems and intricacies.

Where combat is concerned, I’m at that point where I stumble into a monster and my brain short circuits. I can’t compute the combos, the ability to ride and control them like mechs if I damage them enough, as well as the wirebug special moves. Then there’s capturing them, which is another whole thing. But forgetting all that – which I’m hoping my muscle memory will sweep up – it’s the rhythm of a fight with a beasty that I find both jarring and compelling. I’m so used to enemies being lasered-focused killing machines, forever matching your movements like swiveling security cameras, that I’m unsure how to handle Rise’s monsters, who act natural.

Sometimes the monsters break loose from you for a bit, or thrash around on the ground if you land a crushing blow. And it’s in these pockets of time where I’m just beginning to realize that I can sheath my weapon mid-battle and use this time to wirebug into the air for a devastating slam, or even whip out a whetstone and make sure my weapon’s not gone blunt In contrast to so many other games, Rise gives you so much time to mull over your options in a fight that I clam up and freeze. I need to reconfigure my brain to assess rather than react, which is easier said than done.

Right now, I’m at the stage where I’m smashing buttons and hoping that each monster drops. My hunter’s manual sits there with about a million red notification markers too. But I’m going to bounce between quests in my attempt to find the point where Monster Hunter clicks and I get that itch to chase down those special lizard pants. The day I finally slide my legs into those pants, will be the day I officially “get” Monster Hunter. Wish me luck folks.