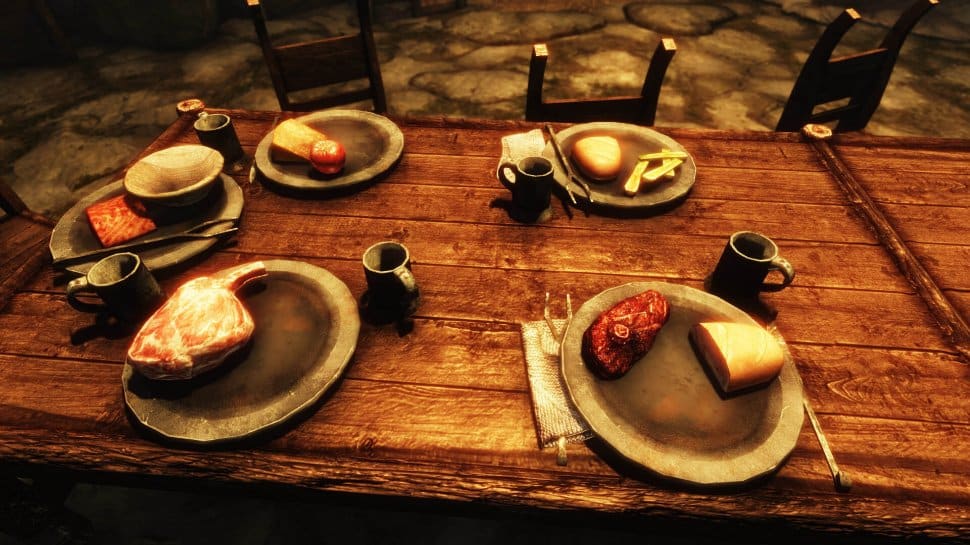 07/09/2022 at 1:15 p.m
from Alexander Ney –
Anyone who has always wanted to replay the classic film “Dinner for One” in The Elder Scrolls 5: Skyrim can use the “JS Rumpled Rugs” modification to create the appropriate conditions. But the mod is also suitable for those who have long had a thorn in the side of the creases and waves in Skyrim’s carpets.

With its “crumpled” carpets, the role-playing classic The Elder Scrolls 5: Skyrim has insulted the eyes of the dragonborn for almost eleven years. But John Skyrim’s modification “JS Rumpled Rugs” puts an end to that – if you are willing to adjust the floor coverings at the touch of a button. Because that’s exactly what this mod allows, which displays the message “Adjust rug” even over small decorative underlays. Pressing the action button will then hide the topping’s messy shape and replace it with a pristine variant.

“The same procedure as every year, James”

So that Skyrim players don’t take the matter with the untidy carpets too lightly, the mod creator John Skyrim has built in a kind of “reminder”. The hero stumbles over wavy carpets, which brings back memories of a certain New Year’s Eve classic. In connection with the Hearthfire DLC content, said “Dinner for One” could certainly be recreated well. It’s possible to cast the role of butler onto a human player with the newly released co-op mod “Skyrim Together Reborn”.

More Skyrim Mods: The Skyrim Together Reborn co-op mod has a release date

Who instead prefer using 16K textures in Skyrim (buy now €19.95) experimented around, he can cover the fire breathers of skyrim with such. Because the dragons in Skyrim are enormous creatures whose textures stretch much more than other creatures in the game. At least that’s what the creator Xilamonstrr argues. This article is recommended for a more detailed explanation.