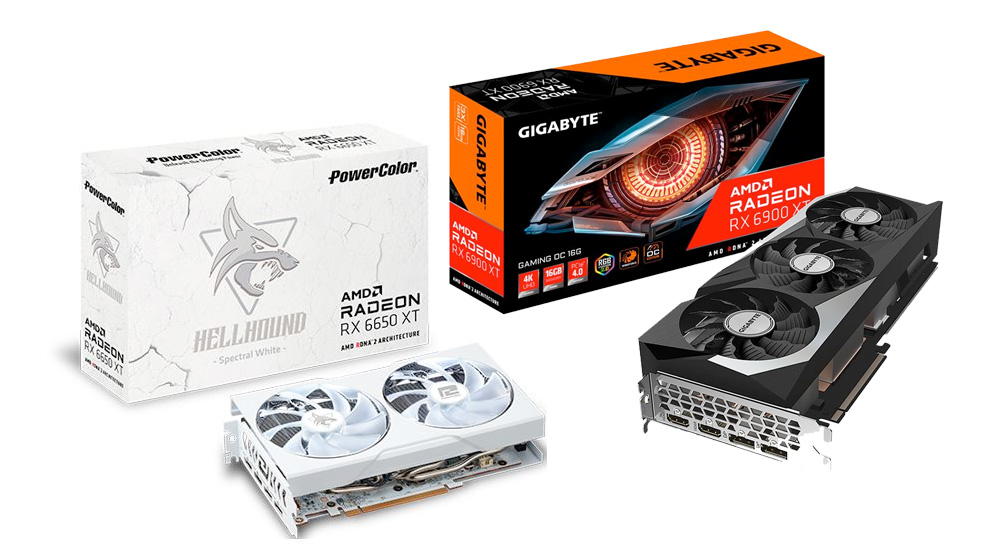 07/10/2022 at 5:00 p.m
from Maximilian Hohm –
AMD’s RDNA 3 and Nvidia’s Ada Lovelace are long-awaited new graphics cards that have already been the subject of many rumours. Most have in common a relatively high power consumption and at the same time a high performance. In the case of RDNA 3, a chiplet design is also assumed, which should be cheaper to manufacture than a huge monolithic die. From this point, most rumors differ in many points such as memory speed and expansion, exact designation, TBP and much more.

One step below are the RTX 4090 and RX 7950XT, both of which should still have the same memory expansion, although the Geforce clock drops to 21 Gbps. The GPUs are also still the same, but these are lower expansion stages. This reduces the clock rates and power consumption, the TDPs are said to be 450 and 400 watts respectively. Here it seems quite possible that this level will represent the flagships for the time being and that the RTX 4090 Ti and RX 7970XT3D will only come onto the market later.

The RTX 4080 Ti and RX 7900XT should represent the smallest expansion stages of AD102 and Navi 31. They lack further execution units and the memory interfaces should only be 320 bits wide instead of 384 bits. Therefore, the memory expansion also drops from 24 GiB to 20 GiB. The clock rates and TDPs continue to fall, with the Geforce it should still be 420 watts, while the AMD card should come to 350 watts.

From the RTX 4080 and RX 7800XT it could become more interesting for the broad mass of gamers. Compared to the current generation, however, both models no longer use the “big” graphics chip, but a smaller model. AD 103 and Navi 32 should fix it and offer significantly fewer execution units than the small expansion stages of the flagship chips. The memory interface of both models should shrink to 256 bits and consequently 16 GiB graphics memory would be installed. Nvidia is said to have a TDP of 400 watts due to a very high core clock, while AMD’s RX 7800XT is said to get by with 320 watts. As with the Radeon RX 6800, there should be no direct Nvidia opponent for the Radeon RX 7800 that has a comparable memory expansion.

Only the RTX 4070 and the Radeon RX 7700XT should compete with each other again. However, this time the Radeon card does not appear to have its own mid-range chip, but to rely on a slimmed-down Navi 32 whose memory interface is reduced to 192 bits. That would mean a tie with the Geforce and both cards should be equipped with 12 GiB GDDR6, while all Nvidia cards still get GDDR6X memory. The TDPs should be 300 or 250 watts for Nvidia and AMD.

According to Kepler_L2, Nvidia should launch the RTX 4060 Ti without a direct AMD opponent and equip it with 10 GiB Vram. It is said to have a TDP of 275 watts. AMD acts according to the same scheme with the Radeon RX 7600 XT, which carries the small Navi 33 and is equipped with 8 GiB Vram. Below this card, competition between the Radeon RX 7600 and the Geforce RTX 4060 is planned again. Both cards should use 8 GiB Vram and supply them with a 128-bit memory interface. The TDPs are said to be 200 watts (AMD) and 240 watts (Nvidia).

According to Kepler_L2s information, all cards seem to rely on different amounts of (infinity) cache and in some cases have significantly higher TDPs than their predecessor models. The most economical AMD card would still have 200 watts, while Nvidia would have nothing below 240 watts according to this information.