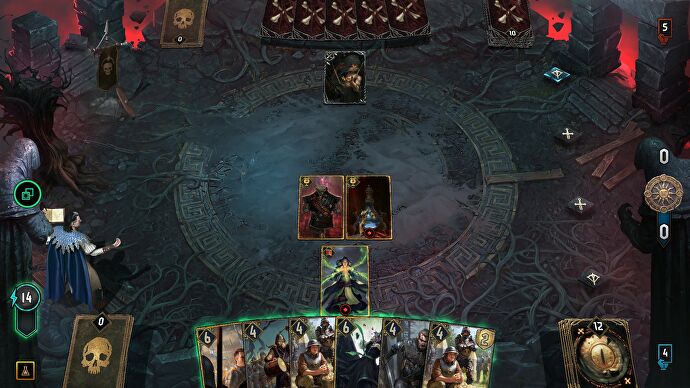 Gwent: Rogue Mage review
Gwent steps into his own standalone adventure for the second time. Journey across an ever-changing board, fighting beasts and backstabbers alike as you go.

The better part of a decade ago, I got really into Gwent. Like, ‘stay up till 3 am scouring The Witcher 3’s vast lands for new cards’ into Gwent. With Gwent: Rogue Mage, I can feel that drive slowly creeping in again.

The latest spin-off from The Witcher trilogy (and technically the spin-off of the standalone Gwent spin-off), Gwent: Rogue Mage puts you in charge of two mages, Alzur and Lyliana, attempting to create the very first Witcher hundreds of years before Geralt’s adventures. They do this by apparently journeying over a board of randomized roguelike encounters, stopping at each one for either a Gwent battle or an event, before facing off against a final boss to bag a mutagen needed for their radical experiments.

Gwent functions largely the same here as it did in The Witcher 3. You and your opponent take turns playing cards, dropping units onto one of two rows on your own side of the board until your hands run out. Whoever has the combined highest power score from their units at the end of the battle wins. Abilities really shake things up – a card might damage all opposing units every three turns, or another could provide boosts to allies – and this is where Gwent succeeds in making every encounter different.

See also  PlayStation: First leaks of the State of Play in circulation

That’s not to say CD Projekt isn’t iterating on their already great card game. Protagonist Alzur stands to the side of the playing board with a roster of spells you can activate every turn to heal your cards or damage your opponent’s, while the imposing enemy you encounter in the overworld takes the form of a commanding card with supreme abilities. For example, the blind prophet will transform a card into a random new one every other turn or the frost dragon can freeze your cards and instantly destroy them if they’re moved around the board.

These changes are really good. CD Projekt seems to have taken the motto of ‘if it ain’t broke, don’t fix it’ and has thrown it out the window and it’s really paid off here, as Rogue Mage adds new elements that make Gwent even more fun. No two matches were ever the same back in The Witcher 3, and that’s even more so now. Leader abilities and spells have really taken the card game to the next level, solidifying itself as a complete standalone from The Witcher 3.

Outside of AI mishaps, a lot of Rogue Mage’s battles hinge on your AI foes knowing what they’re doing, but that isn’t always the case. Your opponents can make head-scratching moves like playing a card on the last round of the game that has an ability that activates on the following turn (making the play entirely redundant) or overlooking an obvious move that’d send one of your cards to the graveyard. I suppose it’s sort of like playing chess – your opponent capitalizing on (or completely missing) the best move in any scenario is a natural part of the game itself, so I can’t really be mad that Rogue Mage’s AI players act like, well , players.

Outside of AI mishaps, Rogue Mage’s biggest strength undoubtedly lies in its roguelike borrowings. Every run is a mixture of varying opponents and chance encounters, any one of which can have a drastic effect on the rest of your run. You’ll fight countless creatures and characters from across the Witcher series like ferocious Leshens and powerful necromancers. You can run into events that grant you increased energy or duplicate a card, and there are choices that’ll have a big impact on your run, like gambling your cards for the chance at increased power or entering a boxing ring to punch an opponent so hard your cards upgrade themselves.

Since you’re always rewarded with a brand new card for your deck after a win, you’re brilliantly incentivized towards battles, and managing your energy resource becomes a daring balancing act of letting loose with Alzur’s powerful spells but at the risk of being fresh out of energy when you truly need it.

Some chance encounters fall right on their faces, though. I’ve come across events that give you the option of either gaining more energy or permanently losing a card – a no-brainer to say the least – while others disproportionately skew towards the risk instead of balancing things out with the reward. It’s a shame, because these issues put you off events entirely, reducing Rogue Mage to back-to-back battles across the entire board before the climactic boss encounter.


There are also unfortunately some bugs undercutting the entire experience. Instances where unit abilities wouldn’t trigger correctly pop up every now and then, while promised card upgrades after slogging through a tough battle with an elite enemy just wouldn’t materialize. Ordinarily, this wouldn’t really bother me, but in a roguelike game where a single misstep can send you right back to the beginning and eliminate an hour’s progress, it’s frustrating.

Gwent: Rogue Mage is a great evolution of an already-satisfying foundation. The roguelike trappings of traveling across an ever-changing board full of shifting events and encounters meld wonderfully into the action of Gwent battles. Some redundant events and bothersome bugs aside, this is a real treat.