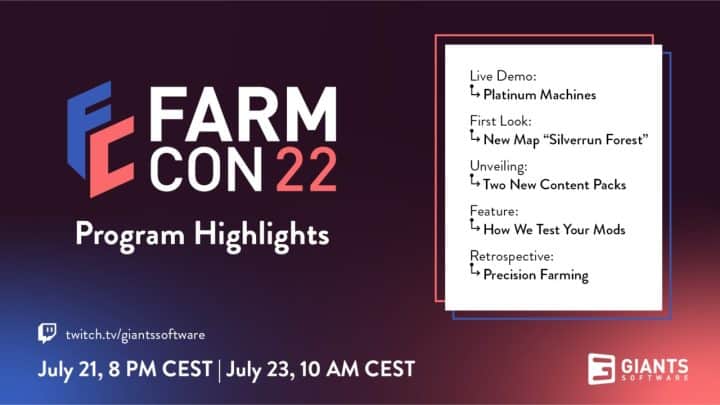 News and premieres at FarmCon: Publisher and developer GIANTS Software uses its annual community event for numerous announcements about Farming Simulator 22. FarmCon 22 will take place as a hybrid event from July 21st to 24th.

The event begins with an international stream on the official Twitch Channel on Thursday evening at 8 p.m. CEST, followed by a weekend of face-to-face meetings directly at John Deere in Mannheim.

GIANTS Software will kick things off on July 21st and will already show a small foretaste of the FarmCon weekend in the live stream: In the approximately two-hour stream, the developers show the progress of their current work and give an overview of what fans can expect this year be able.

The highlights of the show on Thursday evening:

FarmCon will start live from the John Deere Forum in Mannheim on July 23 at 10 a.m. CEST. GIANTS Software is expecting more than 700 guests who can look forward to much more detailed lectures and presentations on the topics discussed on Thursday.

GIANTS Software will simultaneously translate the predominantly German-language stage program and thus carry the fascination of FarmCon out into the world via the official Twitch channel.

In addition to insights into the Platinum Expansion and the two newly announced packs, fans can expect a “Baling Royale” competition in which participants virtually stack bales against the clock. There are also personal meetings with GIANTS Software employees from all four branches, as well as a panel with two German content creators.

Farming Simulator 22 from developer and publisher GIANTS Software is available for PC, PlayStation 5, Xbox Series X|S, PlayStation 4 and Xbox One. astragon Entertainment is responsible for distribution in Germany.