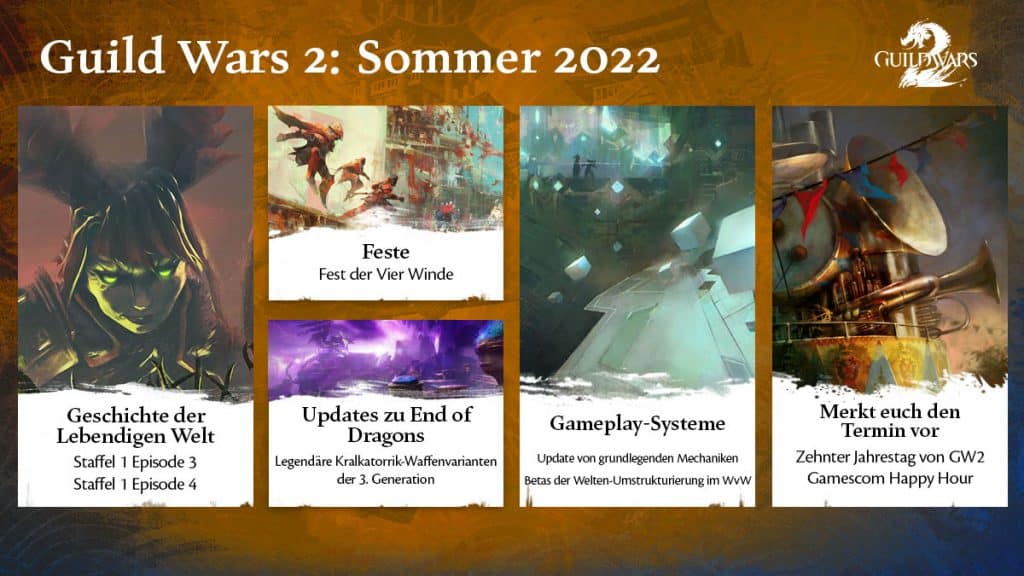 Guild Wars 2 is slated for release on Steam in 2022. The developers revealed this earlier this year. Since then there have been repeated updates, which mainly improve the start and eliminate the chaos around currencies and story gaps. The upcoming update on July 19 is also aimed at improvements for newcomers.

What does the July 19 patch bring? Mainly general improvements:

The update also brings back an old episode of Living World Season 1. This time it’s all about Queen Jennah’s Jubilee Festival.

The old Living World Season 1 episodes are currently being released throughout the year as they were originally intended to be limited events only. However, this created a gap in the story that is now being fixed for the Steam release. The episodes are available to all players permanently and free of charge.

You can find out everything about the latest expansion End of Dragons here:

See also  Steam Clorthax Quest: All the clues and solutions for the Summer Sale 2022

Guild Wars 2 gets better for newcomers for the Steam release

What are the developers currently doing for the Steam release? As mentioned above, almost all adjustments currently revolve around making it easier to get started or removing confusing elements from the game:

In addition, since the release of End of Dragons in late February, the four Assault missions have released challenge modes, one of which was wicked, two balance patches have been released, new Legendaries have been introduced, and several events have been hosted.

How’s the summer going? Plans for the summer include the release of another episode of Living World Season 1 and adjustments to the gameplay systems. The main focus here is world-versus-world, which is to be completely revised and restructured.

You can see the complete roadmap here:

Steam release could cause a small boom

Is it worth making so many adjustments for the Steam release? Most likely. SWTOR was released on Steam at the end of 2020. Although there was no major update, over 34,000 players watched the MMORPG at the same time (via SteamDB). In the meantime it was even the MMORPG with the most players and is still the MMORPG with the best rating on Steam.

So there was a bit of hype surrounding SWTOR, and I guess the Guild Wars 2 developers are hoping for that too. Their game is even a bit friendlier to Free2Play players than SWTOR was.

When is GW2 coming to Steam? This is unknown. Officially, it only says that the release will take place in 2022.

See also  Obi-Wan Kenobi: Star Wars Fan Reveals What The New Series Could Look Like As A Movie

What do you think of the latest changes to Guild Wars 2? And would you check out the MMORPG on Steam or are you already playing without the Steam release?

Along with the Steam release, the developers have already announced expansion number 4: