As Dusk Falls review: a gripping adventure that deserves a prime time slot 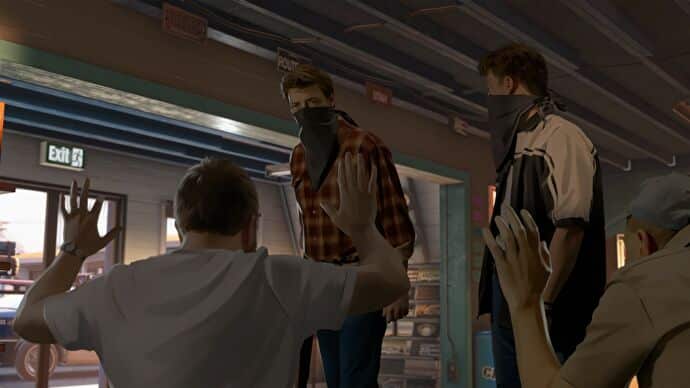 As Dusk Falls review
As Dusk Falls is an interactive drama that places you at the center of an incredibly tense robbery gone wrong. Aside from some rare wooden dialogue, it’s a touching tale of loss, betrayal, fear, and love that I hoped wouldn’t end.

I know I’ve found a new favorite show when it’s impossible to stop watching. That feverish ferocity to see just one more episode is the best feeling. As Dusk Falls, an interactive story about a robbery gone wrong in Arizona, managed to evoke that feeling early on and carry it throughout my roughly seven-hour playthrough. Split perfectly into two chunks that cover three chapters each, it’s a thrilling adventure that deserves a prime time slot in your evenings over the weekend.

As Dusk Falls primarily focuses on two families: the Holt kids, who live in Two Rock, Arizona, and the Walkers, who are just traveling through. I won’t go into many specifics on what happens, because you really should experience it without spoilers if possible. However, the short summary is that the families collide for a particularly bad few days that’ll have a life-changing (and in some cases, potentially life-ending) impact on those involved.

As Dusk Falls doesn’t limit you to just one or two perspectives, though. Instead, you’ll control a bunch of characters over the course of six chapters, letting you influence every aspect of the story. This helps you connect to the cast and in turn, creates a journey that feels very personal. They’re also a fantastically flawed group, so it’s thrilling to watch secrets spill out in every scene as the story spirals away from the group’s initial encounter.

See also  Stardew Valley meets witches: In this Switch game you do magic and farm

As you might expect from an interactive drama, the story is yours to control. It’s all standard stuff – you move a cursor around to interact with the environment and select dialogue options that push the story down branching paths. There are also quick time events in particularly tense moments, which account for about 99.99% of As Dusk Falls. For those who would prefer to remove the pressure and need for fast reflexes, there are accessibility options in the settings that you can enable at any time. These include options for extending the QTE timers to 20 seconds and changing any button-mash sections to single taps. The choices come thick and fast, and there’s a good mix between Telltale-style THIS IS IMPORTANT moments and more subtle choices that you might not realize until the consequences begin to unfold.

Interestingly, there are no wrong decisions in As Dusk Falls. There are no fail states to be found, so every interaction is vital, no matter how small. Failing a QTE or saying the wrong thing in a heated discussion could lead to a crushing death later on, but the game continues to march on. The way the story adapts and changes to allow for any outcome feels similar in structure to Supermassive’s Until Dawn and The Quarry, albeit with a much more dramatic tone. At the end of each chapter, you see a flowchart that shows how far the story can branch, with options you haven’t seen greyed out to keep the specific events secret for future replays. Seeing how far the story can diverge made me want to replay almost immediately to see those different outcomes. Fortunately, that’s made incredibly simple, as you can scroll along the flowchart and jump back into the story at almost any moment if you don’t want to start a whole new save.

Unlike Supermassive’s similar narrative adventures, there’s no walking around or exploring in As Dusk Falls. It is told through a series of visual novel-style watercolor stills with very light animation. Making it a visual novel feels like the perfect choice, as it immediately places a firm emphasis on the story and keeps the narrative moving. There’s seldom a moment of respite and it demands a lot of attention, but everything feels like it matters. You won’t have to interact with a bunch of coffee mugs and family portraits for unnecessary exposure, here.

While most of the dialogue feels engaging and natural, there are a few moments early on that left a bad impression. Most of them revolve around Dale Holt, the middle child of the three Holt boys. Dale Holt is a bad guy who is often badly written. One particular scenario involves Dale screaming at a barking dog to be quiet. To show that Dale is dangerous, he points a gun towards the dog (it’s a very cute dog) and screams that he doesn’t care what it feels. It gets across that Dale is a Bad Dude, sure, but it’s extremely on the nose, like Anakin Skywalker’s awkward angst in the Star Wars prequels. Fortunately, this wooden dialogue seems unique to Dale and his role is minimized fairly early on.

While playing solo allows you to tell the story you want with precision, As Dusk Falls has a range of multiplayer options that allow anyone to join in. This can be as simple as plugging in another controller or connecting online, but there’s also a companion app that you can download if friends and family that don’t usually play games want to hop in. If, like me, you love to nuzzle down on the sofa with your pals when watching new TV shows and movies, As Dusk Falls couldn’t make it any easier.

In multiplayer, everyone gets a cursor to vote on decisions. If there isn’t a clear winner, the game will randomly decide which of the preferred outcomes to follow. However, each player also gets three overrides, which you can activate at any moment to gain complete control over a scene. This is the chaos that I live for. Everyone wants to submit to the mean threats and throw their hands up? Not me, I override and lunge for the nearest gun. Cue an evil laugh from me and a loud cry out from all the other players. It also provides insights into your choices at the end of each chapter – apparently, me and vid bud Liam are fast friends, despite our ever-growing rivalry within the RPS treehouse proper.

Aside from some glaringly wooden dialogue in the early chapters, As Dusk Falls is a thrilling story that had me hanging on every word. It immediately establishes an incredibly tense situation and I couldn’t stop playing until I’d seen it through. While some might stop after one playthrough, the narrative flowchart for each chapter shows that there’s much more to experience, and the ability to jump back in at any point of the story is a welcome alternative to doing an entirely new run. As it became apparent that the story was drawing to a close, I found myself desperately hoping for just one more scene so that I didn’t have to leave the characters behind so soon. Whether As Dusk Falls gets a direct sequel remains to be seen, but one thing is certain: I can’t wait to see what Interior/Night do next.