Eurojackpot: An unbelievable 117 million euros in the jackpot 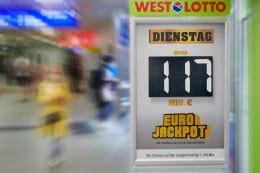 This is a lottery record for Germany, because such a high sum has never been played before.

In the 14th drawing of the current jackpot period last Friday, July 15, no player in one of the 18 European partner countries of the Eurojackpot lottery was able to win first place. Still, there are big winners. With the winning numbers 9, 11, 16, 19 and 32 and the two Euro numbers 3 and 5, there are four hits in the second prize category. 790,664.20 euros each go to Sweden, the Netherlands (2 x) and Poland.

Last jackpot win from May

The last win in the first tier of the Eurojackpot lottery was seven weeks ago. On May 27, a player from Bavaria won 16.8 million euros. A three-digit million prize has only been paid out once: On May 20, an Internet tip from North Rhine-Westphalia achieved over 110 million euros.

Chance of the jackpot

With the upcoming summery weather in the coming days, it’s worth going to the nearest lottery acceptance point. Alternatively, the tip on the mega jackpot can also be found on the Internet at www.eurojackpot.de be given. Who will have the correct seven numbers in the game formula 5aus50 and 2aus12 on their ticket? The chance of winning first place is 1:140 million.

See also  The computers of the PCGHX community: From gaming carrots, modding beauties and curiosities

Participation in the game is possible until Tuesday evening, 7 p.m. The acceptance deadline may vary depending on the federal state.