MacBook Air 2022 M2: How severe is the throttling compared to the MacBook Pro M2 and Air M1? 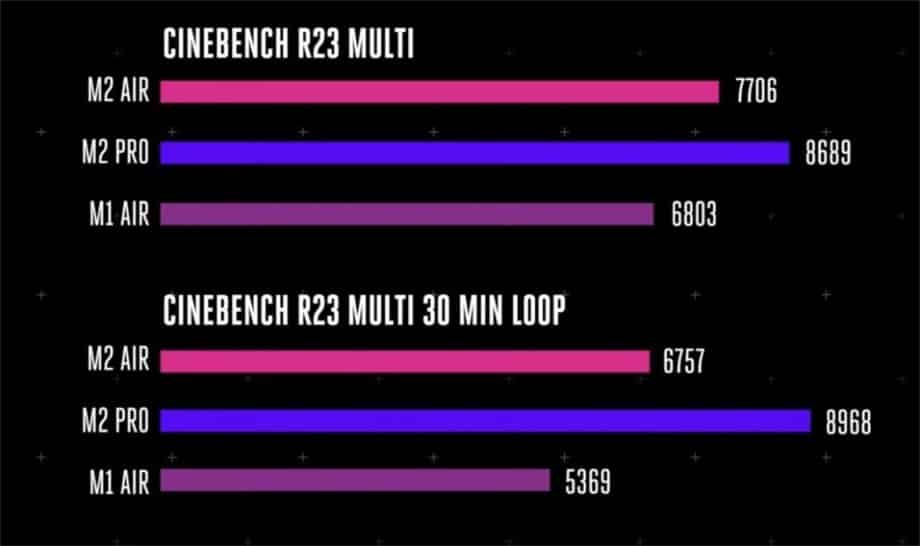 07/18/2022 at 2:21 p.m
from Claus Ludewig –
An Apple M2 chip is at work in the new MacBook Air. According to the test report, the ARM chipset suffers from throttling. How does it compare to the big brother MacBook Pro M2 and the predecessor MacBook Air with M1 chipset?

In June, Apple presented new MacBooks with the new Apple M2 chipset at the WWDC developer fair. The new MacBook Pro with the Apple M2 recently had to prove itself in a test. Parallel to the Pro model, Apple also announced a new MacBook Air with an M2 chip. The prices start at around 1,500 euros or just under 1,385 euros for the education sector with appropriate proof. In contrast to the MacBook Pro, the Air version suffers from severe throttling, as revealed in a review by The Verge.

In the multi-core test in Cinebench R23 the performance of the MacBook Air with the M2 chip drops by almost 15 percent, when running the test for 30 minutes. Compared to the MacBook Air 2020 with the M1 chip, Apple has improved the thermal behavior; after all, the throttling is 25 percent here. The performance range for the Air is between 7,706 points and 6,757 points. Either way, the new MacBook Air with the M2 chip is slower than the MacBook Pro with the M2 chipset, which scored at least 8,689 points. The Pro version, which costs at least 1,600 euros, is actively cooled by a fan and does not have to be throttled as often as the passively cooled SoC in the MacBook Air. A look under the hood shows that the battery has three parts and a large heat sink with a graphite strip instead of a fan is installed.

Hardly any user should notice the throttling in normal everyday office use, but the throttling should be noticeable in connection with demanding scenarios, such as benchmarks or video games. In the Apple M2, four efficiency cores and four performance-tuned cores take care of the computing work with a package power of 22 watts. Compared to the Apple M1, the successor is larger and packs 20 billion instead of 16 billion transistors into the 145 square millimeters. In addition, Apple has increased the clock rates of the performance cores to 3.5 GHz in the M2 chip. In addition to the faster SoC, only the Pro versions can be used with two external monitors, while the MacBook Air can only be used with one external display.

Also worth reading: Apple MacBook Pro in the test: What can the new edition with the M2 chip do?