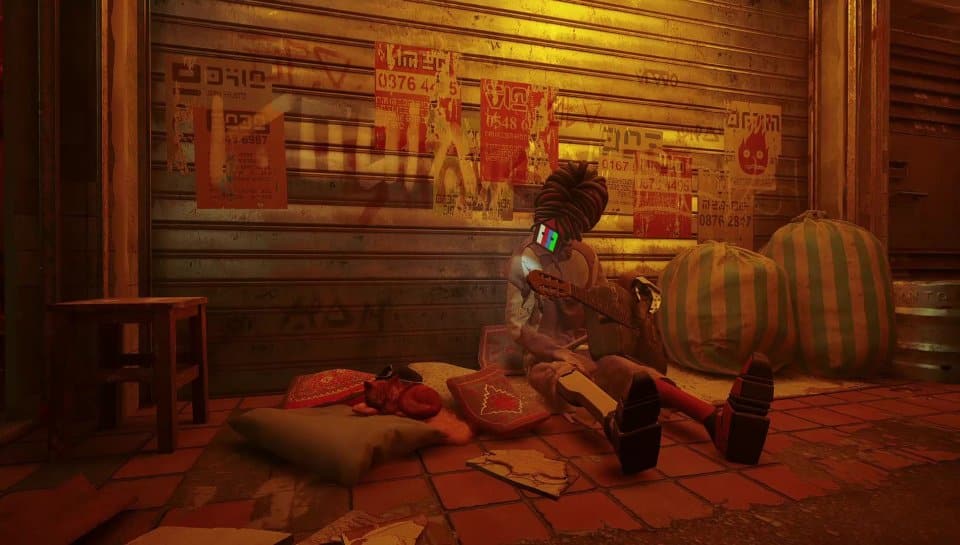 A cat is separated from its fellow cats and suddenly finds itself in a robot-populated city surrounded by a dome. The kitty befriends a drone named B12, who is also looking for a way to escape and can translate the robots’ language. Together they unravel the mysteries of the urban world and climb level by level to break through the city walls and get outside. This simple story forms the basis of the cute sci-fi adventure Stray. The feline adventure from the French development team BlueTwelve Studio is one of the most anticipated video games of the summer, which is probably due in no small part to the whimsical nature of its furry protagonist.
We are therefore pleased to present perhaps the most important detail regarding Stray at this point (buy now €39.99) to be able to confirm: Yes, the cat is freaking cute, and yes, there are numerous ways to do really cute things with her.

Anyone who put Stray on their wish list primarily to spend some relaxing time with the charming main character should get their money’s worth, especially in the first few hours of play. Not only are the cat’s appearance and movements extremely realistic, their behavior is also authentically cat-like. At the push of a button we can, for example, push objects off the edge of the table, use pieces of furniture as a scratching post, cuddle with NPCs or curl up into a sleepy ball. Most of the time, these actions have no real function in the gameplay, but they still enrich the experience immensely and definitely elicited a few “awwwww” noises from us while playing.

However, Stray is not just a series of delightful moments, but also tells an action-packed story in a dystopian cyberpunk universe. At the beginning we peacefully indulge in our existence as an inexperienced kitten, in the course of the adventure we are drawn into a social power struggle. The gameplay in the first half consists mostly of roaming through abandoned alleys and apartments and gathering information there, in the back part of the game sabotage actions, prisoner liberation and political overthrow are on our agenda.

Sneaky passages, fetch quests and smaller puzzles add variety to the gameplay, but the idiosyncratic magic of the first half is lost a bit in the missions. Precisely because these sections have fewer and fewer cat-specific moments and the world no longer seems so fascinating and mysterious due to the focus on a straightforward plot.

Since Stray is a fairly short game, with around six hours for the main plot, there is at least no boredom. There are optional side missions, but they really only consist of collecting certain objects. For example, we can collect sheet music for a musician or help a factory worker find his keys. Some locations or objects can be inspected by B12, which activates the drone’s memory function and unlocks more information about the game world. A total of 27 of these memories are hidden in the 12 chapters of the game, but Stray is still a long way from an open-world game. Some sections of the city are a bit more extensive and are visited more than once, but the last section in particular is quite small and not as reactive as the previous chapters, which makes the finale feel a bit abrupt and unsatisfying.

If we have overlooked something, however, we can conveniently repeat all chapters from the main menu after completing them without losing our progress. This is an important feature as there is no manual save function and we cannot go back to past areas from certain checkpoints.
Continue on page 2