Stray PC system requirements and the best settings to use 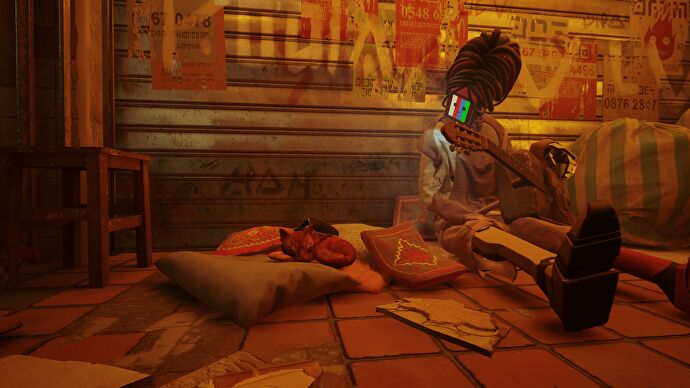 I’ve been looking forward to Stray for years, mainly for the cat-tion adventure premise but so I could enjoy more of its marvelous presentation. The final product (as reviewed by Katharine) isn’t quite as glossy as the 2016 test footage, but it’s still an impeccably detailed, gorgeously lit slice of cyberpunk – and even so, the PC version can run silkier than a Maine Coon’s coat.

Stray doesn’t have that many graphics settings, so this’ll be a relatively quick guide to tuning performance. In fact, if you’ve got one of the best graphics cards – or any fairly recent, mid-range or above rig – you may not need to lower any settings at all at 1080p and 1440p. High framerates at 4K and ultrawide resolutions are doable too, and while developers BlueTwelve Studio tell me Stray uses a “subset” of ray tracing, you don’t need specific, RT-capable GPUs get the best lighting and reflections.

The minimum and recommended specs are both pretty low; even the recommended CPUs are several generations old and were lower-mid-range when new. You’ll also only need 3-4GB of VRAM, which all modern graphics cards will have with memory to spare.

If you’ve got one of the best gaming monitors with a faster refresh rate, premium GPUs like the RTX 3070 aren’t necessarily overpowered either. Still on max settings, this card pumped out 147fps at 1440p, and managed a smooth 79fps at 4K to boot.

Back at the opposite end of the hardware spectrum, I also tried Stray on the Steam Deck: it’s playable with all High settings, generally staying in the 30-35fps range, though dropping Effects quality to Medium bumped that up to a noticeably smoother 40- 45fps. Not to spoil the next section of this article, but the same settings tweak is a major performance booster on desktop PCs as well.

All in all, not bad going for a game that looks as shiny as Stray does. I’ll confess that until actually playing it, I’d essentially gaslit myself into thinking it did employ proper RTX-grade ray tracing effects. The reality is that the conventional screen space reflections, handsomely atmospheric lighting and neon-drenched aesthetic all combine to make the Kowloon-inspired setting look as if more sophisticated tech might just be at work. I found a few instances of what might be planar reflections, which could explain the “subset” comment (as these use partially similar techniques to ray traced reflections, to reflect objects that aren’t otherwise visible onscreen).

In terms of faults, Stray can microstutter when entering a new locale, though thankfully stays smooth during the more involved platforming/action/puzzle/stealth/pushing things off edges sequences. Ultrawide support isn’t perfect either: while playing normally, it’s fine, though some cutscenes don’t fill out the full width of a 21:9 monitor. On top of that, a lot of them add temporary horizontal black bars, resulting in a chunky void border around the whole scene. Like you’re watching it on a laptop from 1998 or something.

Stray: the best PC settings to use

Those are both fleeting issues, mind, and at the very least aren’t affected by your chosen combination of Stray’s PC graphics and visual settings. These are basic but functional: you’ve got 30fps, 60fps or uncapped framerate options, a V-sync toggle, and your choice of fullscreen or windowed mode. Motion blur and a sharpening filter get their own sliders, and there are just four individual quality settings, without presets.


Here’s how they affect Stray’s PC performance, using benchmark tests from the GTX 1050 Ti as a guide. Remember that this averaged 47fps with everything on the maximum High settings…

Effect quality: Dropping this from High to Medium produced a noticeably smoother 66fps. In turn it causes a slight dip in lighting quality – see how, in the screenshots above, matte surfaces like the cobbles and metal shutter become inexplicably brighter on Medium. That said, it’s easier to overlook in motion, and Medium certainly looks better than Low, which murders the ever-so-well-done ground reflections. Low also ‘only’ averaged 70fps, so its performance improvement isn’t as worthwhile as the jump from High to Medium.

Shadow qualities: Again, you’ve got a choice of High, Medium, and Low for this, though there was no performance difference between the three whatsoever when I tested them. All produced the same 47fps, so you may as well leave this one on High.

Texture quality: Lowering this doesn’t help performance either. In fact, both Medium and Low settings averaged 46fps, a single frame below the original High result. Peculiar, especially as there is a very visible quality drop on various textures on the Low setting.

Mesh quality: Yet again, changing this will do next for nothing for performance. Medium got me an unchanged 47fps and Low produced 48fps, so just leave Mesh on High as well.

So! That was weird. Only one of the four quality options has any effect at all on performance, so if you’re on an ancient GPU and want a smoother catventure, your best and only bet is lowering Effects quality to Medium. Or low, if you’re in really dire straits, though that would come at the cost of Stray’s lovely lighting and reflections. I guess you could lower the resolution as well, though as ever that’s the nuclear option.

Really, though, Stray will purr on most PCs, and I’d personally recommend you go with High quality everything if you can. Motion blur and sharpening don’t affect frames per second either, so set them to your tastes; I ultimately went for no blur whatsoever, and sharpening at about 25%.